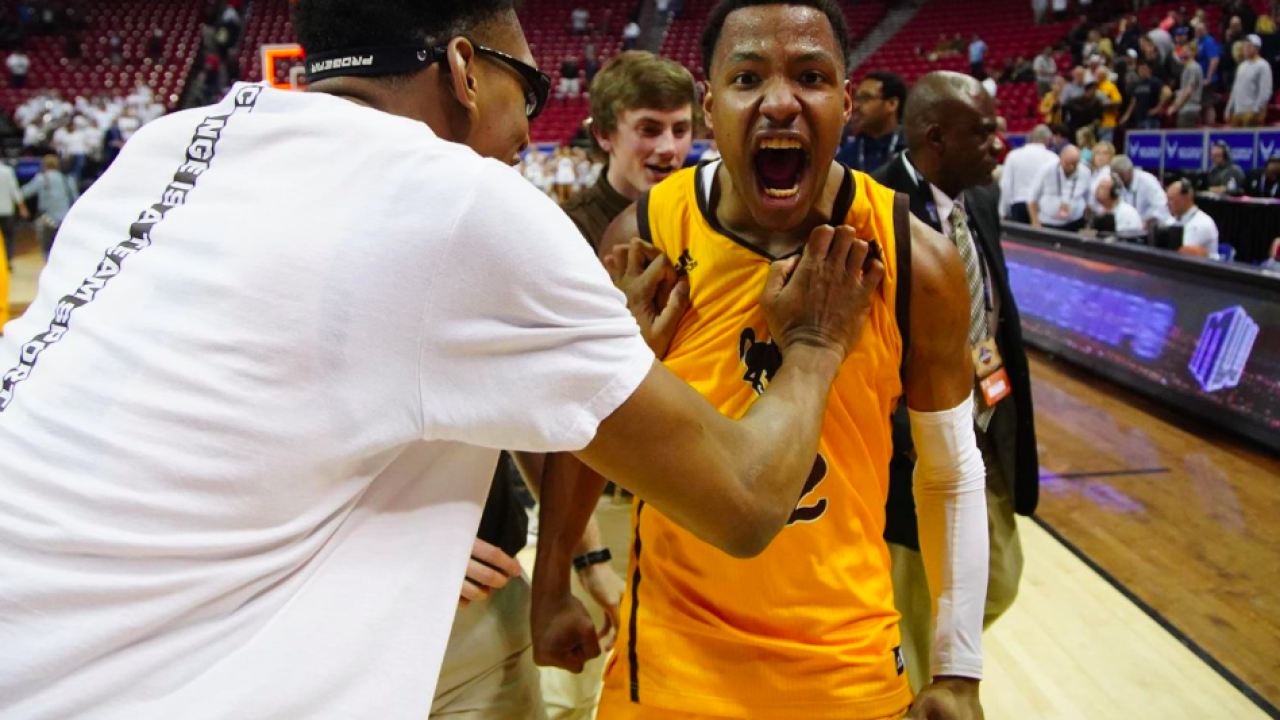 The Cowboys (9-23) face second-seeded Utah State Friday at 9:30 p.m. MDT at the Thomas & Mack Center in Las Vegas. It will be televised on CBS Sports Network with Rich Waltz on play-by-play and Dan Dickau on color.

The Pokes were led Thursday by senior guard Jake Hendricks with 12 points, as he connected on four three pointers to push his career total to 155 made threes, which is ninth all-time. Freshman Kwane Marble II added 24 and became the first freshman for Wyoming to score in double-figures in a MW Championship in back-to-back games since Josh Adams in 2013. Sophomore Hunter Thompson added 17 points off the bench, including making a trio of three pointers.

Lindsey Drew hit a pair of three-pointers in the first three minutes to give Nevada an early 8-4 advantage. The Wolf Pack's Jazz Johnson, one of the nation's top three-point shooters added one to build the lead to five points at 11-6 at the 16:06 mark of the half.

Freshman Kenny Foster and Maldonado fueled a 5-0 run to build a 26-22 lead for the Pokes with eight minutes left in the half. Foster hit a transition layup with Maldonado adding the Pokes' fourth three pointer of the half. Nevada's Jalen Harris the MW leading scorer added six-straight points to give the Wolf Pack a 28-26 lead with under six minutes remaining in the half. Johnson would then add four points and a jumper from KJ Hymes to cap a 12-0 run for the Wolf Pack for a 34-26 with under three minutes left in the first frame.

Wyoming recorded three turnovers in the opening minutes of the second frame, but a Hendricks triple cut the lead to eight, but was built to 12 points at 48-36. Hendricks would respond with another three pointer and Marble II added one for a 48-42 game with 15:15 left in the game.

The Pokes would later go scoreless for over five minutes until Hendricks hit a three-pointer to make it a seven point game at 56-49 with a little over nine minutes remaining. But Wyoming held Nevada without a field goal for over six minutes and made it a 58-54 game with under eight minutes remaining.

Sophomore Greg Milton III hit a three pointer and threw out a helper to Thompson to give Wyoming a 62-61 lead and Marble II added layup to make it a 64-61 game for the Pokes with 4:13 left in the game. Drew hit the Wolf Pack's first shot in nearly 10 minutes to make it a 64-63 game with 3:54 left.

Wyoming would stretch the lead to five, but Johnson hit a three-pointer with 2:12 left for a 68-66 game. After a Marble layup, Nevada scored a three and started fouling the Pokes. Wyoming went 4-of-6 from the line down the stretch to hold off the Wolf Pack, 74-71.