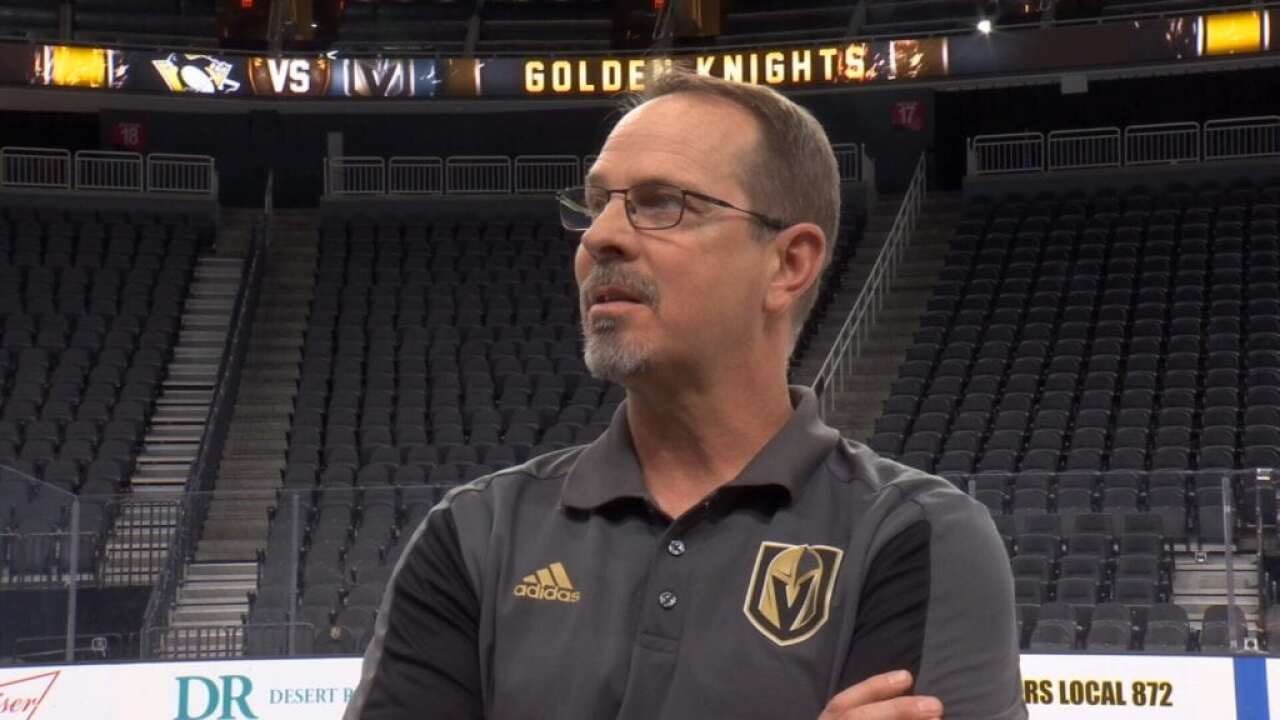 BILLINGS — Mike Muir has come a long way since the days traveling across Montana on a bus in the American West Hockey League.

An athletic trainer by trade, Muir began his career with the Billings Bulls in the 1990s under head coach Bliss Littler and has since worked his way up to hockey's highest level as the assistant trainer for the Vegas Golden Knights of the National Hockey League. Muir was hired before Vegas' inaugural season in 2017-18 and watched the expansion franchise go all the way to the Stanley Cup Final after winning the Western Conference title.

MTN Sports caught up with Muir in August when the Golden Knights came to Billings for a free kids camp.

MTN Sports: Let's talk about you walking back into Centennial Ice Arena for the first time in 20 years.

MTN Sports: What were the first memories or driving up, getting to the parking lot, and walking in?

Muir: Nothing's changed. It's very similar, very familiar. Driving up Rimrock past Metra was nice. Everything's so familiar, so it's pretty special.

MTN Sports: You heard that the team was coming to Billings, and you thought to yourself, 'Why not?'

Muir: Why not? All my in-laws are here, so I had the opportunity to come back to see the town again, see some friends, see some family, and do a little promotion for youth hockey, so it's great.

MTN Sports: Let's talk about camps like this. Growing up in the hockey world, you've seen camps like this at a high level, but it seems like the Knights have taken it to another level at least early on, trying to get to smaller communities that are in their area and build their fan-base.

Muir: I applaud them for it. Back in the 90's when I was working junior hockey, and the Bulls were a strong force in junior hockey, in the Frontier American West Hockey League, there just wasn't this kind of opportunity for the kids. So for the Golden Knights to be able to do this is fantastic. It's great for youth hockey.

MTN Sports: These kids are learning from professional players today. How big is that for their development?

Muir: Anytime you get a chance to meet an NHL player with the franchise that has been supported so well through the Great West, every kid will have a fantastic memory of it. They'll look back at it, and hopefully it will spark their dream to play a a high level of hockey.

MTN Sports: You talk about an inspiration, is what a lot of these guys will take away from it.

Muir: Right. I grew up in Ottawa,got to play hockey there. When I was a kid, the Ottawa 67's had some camps, I got to go to those. They were bigger than life, those guys. Having an NHL club here, having Jake Bischoff coming to meet the kids, it's gotta be inspirational for sure.

MTN Sports: Let's go back to your time with the Bulls. The Bulls were a higher level of hockey, they were a big deal back when you were here with them. Do you have one or two memories that stick out?

Muir: It was a lot of fun. Jumping on the bus coming up from Vegas to here, it always brings back a lot of memories. I've been doing the bus league for quite a few years, whether it's junior or the American Hockey League. It was nice to get back on the road and see that sort of thing. You instantly remember the camaraderie, the joking, all the fun that the kids had. It was great to work with Bliss Littler - he was an amazing coach and a good friend. All those memories come back anytime you get back on the road, on the bus again.

MTN Sports: Do you follow it still? Are you sad the league isn't what it used to be?

Muir: Through the years, I'll look back. Since I do have family here, I always try to find out what's happening in Billings and keep in touch with the people here. It was tough to keep junior hockey going here, and I understand that. But if it comes back to grass roots where it's just youth hockey coming up, and then maybe that explosion can happen again and bring back junior hockey to the area for sure.

MTN Sports: Are there one or two keys to get youth hockey to expand, like it has in Canada where you grew up?

Muir: Canada is based on a huge volunteer basis. You hear the stories, and they're true - it's the natural thing for Canadian kids to do. We have a lot of outdoor rinks there. I grew up on an outdoor rink at first, then got into organized hockey. But it really comes down to adults helping out - having a joy for it, and wanting the kids to learn it. I applaud the people in Billings to continue this. It's a great thing that they're doing it. All youth sports are based on this. It's the volunteers that truly want the kids to have an opportunity to stay healthy and have fun playing the sport. Hockey is such a great sport. It's so easy to continue to play it - I really consider it a lifetime sport. There's a lot of adult hockey being played, but it has to start at the youth level for sure.

MTN Sports: Let's transition up for you. This is your 3rd season with the Knights.

Muir: Yep, this is the 3rd season. The 1st one was pretty special. Last year was a little disappointing at the end of it, but we have a great team. George McPhee has done a fantastic job getting the players we have. We have every chance of making that same push again the way we did the 1st year, and hopefully the outcome will be a little bit better.

MTN Sports: I asked you how the off-season was going, and you said it was too long. It seems like you're itching to get going.

Muir: It is too long! Not something I'm really used to. Even with the Kings organization, I was lucky enough to play deep into the playoffs. American Hockey League, National Hockey League, great with the Knights, and I hope to make sure we're always playing into late June every year.

MTN Sports: The fact that you guys were late April this year, did you find yourself watching at all, or was it too painful?

Muir: I watched a little, because I love the sport. It's pretty easy to do. I wasn't as interested, but I definitely caught the end of it. And congratulations St. Louis Blues and David Perron, one of our former players. It was nice to see.

MTN Sports: You grew up in Ottawa. Are you a big Senators fan?

Muir: When I was growing up,the Senators weren't around, so I was a (Toronto Maple) Leafs fan. Then once the Senators came in, I changed my affiliation to Ottawa, especially because that rivalry got so big between Ottawa and Toronto. But yeah, you're definitely going to be cheering for the hometown team, and my family is still in Ottawa, so they're Senators fans as well as Golden Knights fans.

MTN Sports: I will guess when Ottawa comes to Vegas, you're still a Golden Knights supporter.

Muir: Absolutely. It's like baseball, when you have an American League team and a National League team. But if the two clash and you have to pick one or the other, absolutely Golden Knights all the way.

MTN Sports: I know they keep you very busy on and off ice, but do you ever get to strap on the skates? Do you play at all?

Muir: You know it's funny, I haven't played adult hockey for quite a while. You're in the rink for so long and men's leagues are usually late at night - I have a family with my two sons, so I don't take that extra time. I go out on the ice for some rehab skates with the guys, if they're coming back from an injury. There's a number of us in the organization who can do that, so that's about the only time I put the skates back on.

MTN Sports: Do the sons play?

Muir: They did. They played in New Hampshire and in California, but since we came to Vegas, they've changed to E-Sports more than anything else. That's the big thing now.