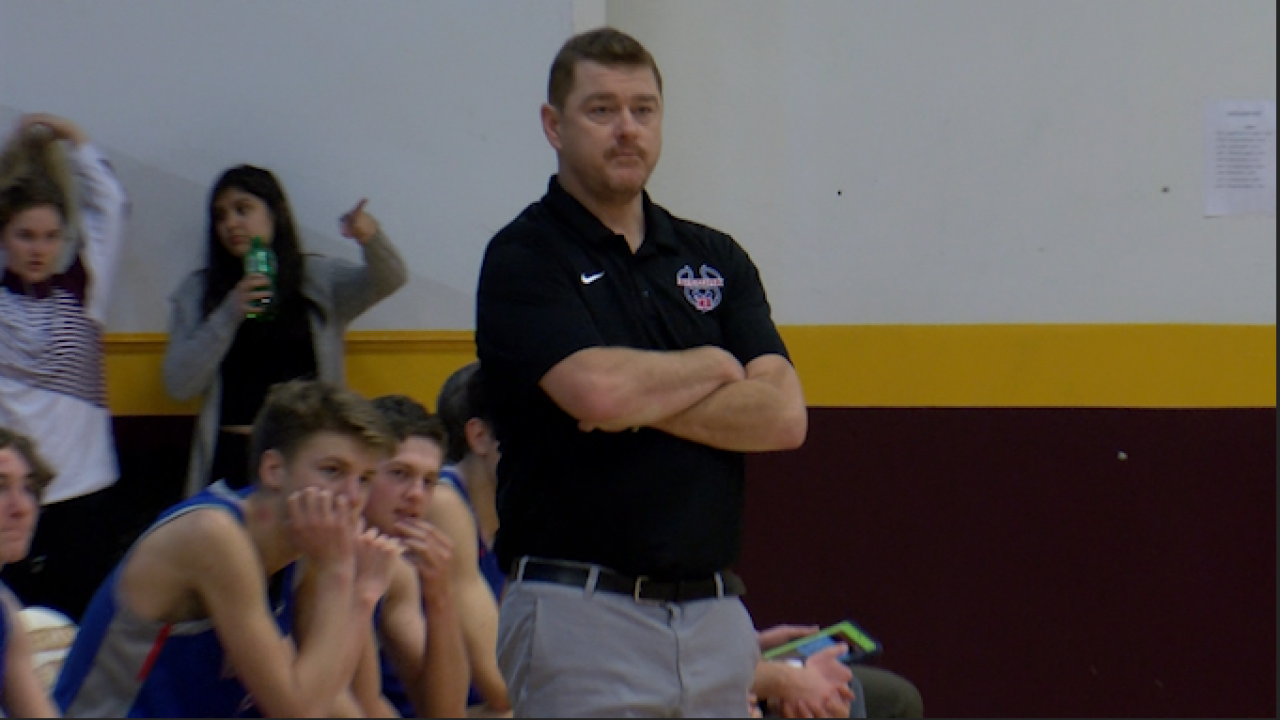 Hollow led the Bengals to three consecutive State AA tournament appearances from 2014-16. The 2014 appearance ended a six-year drought for Helena. A business teacher, Hollow took a two-year hiatus from coaching starting in 2017 before being hired at Bigfork this summer.

Originally from Butte, Hollow played basketball and football for Butte Central. He was set to play college football for Carroll College before injury issues steered him to Montana Western and, eventually, into teaching and coaching. Prior to coaching in Helena, Hollow coached in Ronan for three years and spent one year at Belgrade.

MTN Sports met with Hollow in Shelby over the weekend during the 2019 Coyote Classic to talk about dealing with the expectations, his coaching career, and the many reasons he likes his new job.

MTN Sports: First year coaching in Bigfork. How are you enjoying things so far?

John Hollow: "Very much enjoying it, I am. It's a beautiful area. The community's been great. They really support their basketball. Kids have done everything we've asked. They've worked hard. I'm excited about the season."

MTN Sports: Let's go back to Butte and talk about playing for Central and that journey that led you to Carroll and eventually Western.

Hollow: "Yeah, I kind of had a unique route of college to say the least but love Butte Central. I still follow them to this day. Brody Kelly's a good friend of mine and coaches there. My old football coach is still the football coach there (Don Peoples) and so I still follow them and stay up to date with all that they're doing and love it. I'm very proud to be from Butte. The journey to coaching and Carroll and all that kind of started but with an injury, you know, I went to Carroll to play football and got hurt, dislocated my shoulder all the time. And it was one of those where I kind of wasn't able to continue playing unless I was going to put about a year rehab in and kind of got into the coaching aspect of things and kind of fell in love with it. And you know, I think last two years have been my only two years away from it over the last 20-something years. So it's exciting to get back in and be on the sideline again and getting to work with kids outside of the classroom."

MTN Sports: You went to school to play football but decided to coach basketball?

Hollow: "When I first got out of college, I coached football for a few years at Ronan and I coached for I think a year at Butte Central and football was really my first love, and somehow basketball just kind of became what was available. And I got a great opportunity in Ronan at a young age to be a head coach and probably wasn't ready, but it was one of those things where I attribute to where I am today a lot because of some people giving me opportunities that, you know, maybe I wasn't ready for but made it work. We've kind of had success at different places we've been and, you know, that's kids, coaches, all that stuff. But it's been an interesting journey. Really interesting journey. It's been a fun journey."

MTN Sports: And you’re a teacher as well? What do you teach?

Hollow: "I teach business, computers, accounting, personal finance and yearbook. The last 10 years Helena I was a marketing teacher and sports marketing teacher. So I've kind of taught a lot of things over the years and hadn't taught some of this stuff that I'm teaching now in quite a while. So it's been fun to kind of relearn everything. Let me rephrase that; it's been interesting to relearn everything, but it's been it's been fun to get back in the classroom and do some stuff I haven't done for a while and, and getting a chance to work in a little bit smaller school and a smaller community has been real exciting."

MTN Sports: What’s been your favorite part of moving around the state and seeing these different towns and places?

Hollow: "Everywhere I've been I've truly loved. You know, like I said, I've got a lot of great opportunities. ... I was only in Belgrade for a year due to some jobs circumstances that never panned out, but I really loved my time there. And, you know, Ronan kind of gave me my journey. The last 10 years being in Helena got to work around a bunch of great people, coach with a bunch of great coaches and coach a bunch of great players. So it's been exciting. In Bigfork, the main draw, besides it being a beautiful area and having a business job, is my son lives in Charlo, which is about 40 miles away, and so it gives me the opportunity to get back and not miss his stuff like I've been missing the last couple years. I'm really excited about that. He's in eighth grade now and I'm excited to get to watch him progress and compete at the high school level here in the next few years."

MTN Sports: Let’s talk about your time at Helena High and ending a state tournament drought there. What are some memories that stand out for the Bengals for you?

Hollow: "I had the same group of coaches my whole time there. So, I had a tremendous group of guys that I became really good friends with that, you know, we, we kind of came in and we had to, we had to figure out how we're going to be successful again, and we really changed the brand and implemented a bunch of stuff we really believed in. After we sat around and looked at the program and we had some success, we put a trophy in the trophy case. That's something I'm very proud of. That will always be there. You know, it's fun going back to these places. I was at Ronan a couple weeks ago and my son was playing there and saw our divisional trophy there from when we won the championship 12 years ago or however long ago was. ... You meet great people, had a bunch of great players there that I still keep in touch with today, and Helena was a fun place and you got to coach in the AA. It's all it's cracked up to be, you know, you got phenomenal coaches that know every single thing you're going to do. It really tests what you do and and it makes you become a very good at your craft."

MTN Sports: Well, now you got a Bigfork program here that just went back-to-back at state. What kind of kind of expectations do you have to deal with when you take this job?

Hollow: "No pressure there, huh? I think the last coach, Tudor, I think he lost the total of like nine games or something in his tenure at Bigfork. So the hardest thing right now is replacing eight seniors from last year that won the state championship. So we don't have very many kids that had varsity experience. You know, we're playing a couple freshmen that I think when it's all said and done are going to be really, really good basketball players. And so it's the expectations are there. I know the kids want to succeed. It's been a little bit of a slow process, putting in a new system and everything else. The kids, I'm very happy with that they're doing the things we're asking, but it's just a slow process. ... As we were talking before, it's December, you know, we're going to be a whole different team in three months than we are right now. So, you know, we got to believe in the process, believe in what we're doing. And I think we're going to be a real good basketball team at the end of the year."