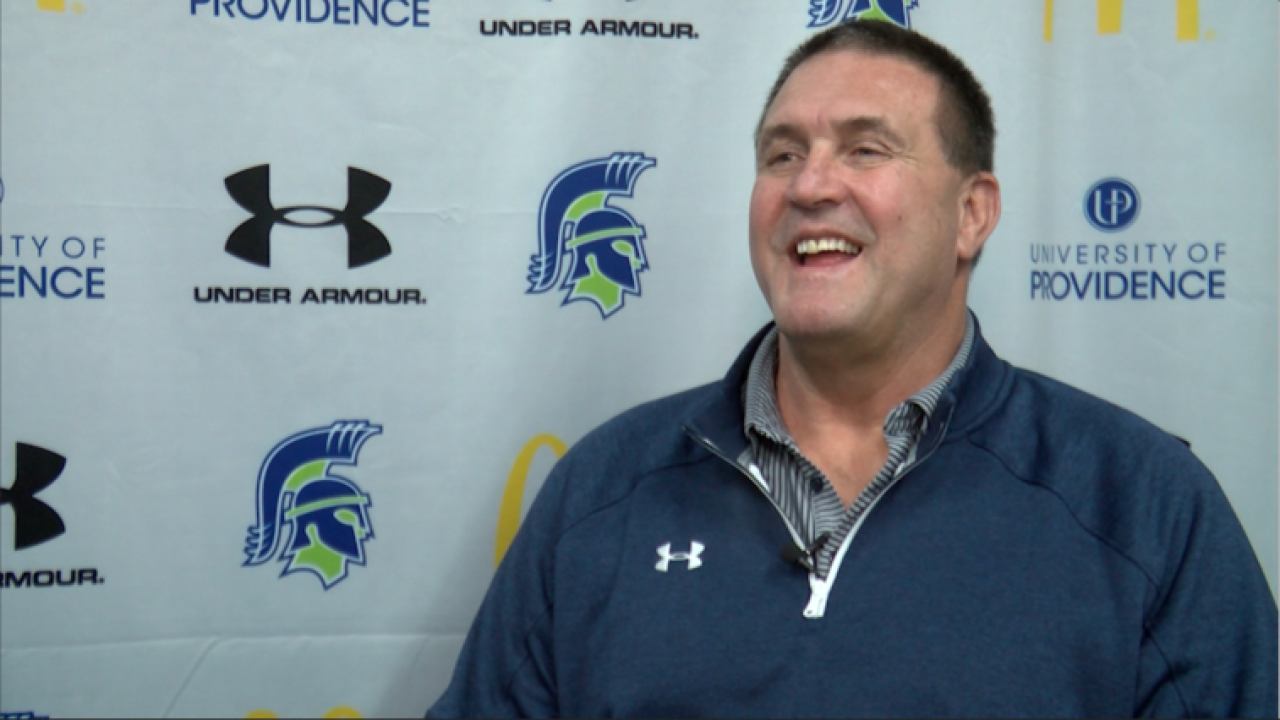 GREAT FALLS — Doug Hashley forgot about the relentless wind when he decided to spurn the Flathead Valley and move back to central Montana. The Big Sandy native was recently named the athletic director at the University of Providence after serving as the assistant AD at the school from 2017-2020.

After a stellar prep basketball career at Big Sandy, Hashley went on to a Hall of Fame career at Montana State in the late 1970s and early 1980s. He still ranks second all-time in rebounding for the Bobcats.

Hashley later went into education, taking on Health and P.E. teaching roles in Livingston, Corvallis and finally a 28-year stint in Kalispell. During his time in Kalispell, Hashley also compiled a lengthy coaching resume, including coaching the Kalispell Flathead varsity boys from 1994-1997 and the Kalispell Glacier varsity girls from 2007-2010. He was an assistant at various times in football, softball and track and field at Flathead and an assistant for the Glacier boys basketball program in the 2010s.

All four of Hashley’s children followed his passion for athletics, competing in the Frontier Conference. His daughters Holli and Emilee played volleyball for Carroll College and Montana Tech, respectively, while daughter Cassidy was an All-American basketball player at Carroll. His son, Jaxen, plays basketball for Providence after a brief stint in the Montana State football program.

MTN Sports spoke with Hashley to discuss his promotion and the growth of Argo athletics.

MTN Sports: You've been up here for a couple years now. How are you enjoying things?

Doug Hashley: "Absolutely love Great Falls. As you know, I'm a Big Sandy boy at heart and so I'm coming basically back home. It's been really exciting. Forgot about the wind, you know, coming from Kalispell, but my wife and I both love it. We have a daughter here with twin granddaughters and, you know, that was a big reason to come back here."

MTN Sports: What about this new role has you excited?

Hashley: "It's going to be a challenge. You know, (former UP vice president for athletics) Dave Gantt has done a wonderful job of, you know, over the last few years of teaching me and getting more involved with a lot of things. And so the transition has been very easy. Yes, I know there's a lot of things out there of the unknown for me. I'm very fortunate that Dave still is on campus. We’ll continue to have our Monday meetings and I'm sure I'll have a list for him as we go forward. But the excitement of being with the coaches that we have and our admin team, it has made this transition really fluid."

MTN Sports: It seems like this athletic department, you know, is continuing to grow all the time. What's it been like to be a part of that?

Hashley: "Actually, anytime you're part of growth, it's exciting and the problems that come with growth are the challenges that you want. And we are we are right in the midst of that, of increasing, you know, the people come into the games, you know, as of last Saturday night, we had a sellout crowd. One of the things that I've always wanted, you know, since I came here, go back in the early 80s, when the Argos, I'd come watch Argo games, I'd be up at the top and it would be loaded. And that's what I wanted to get back here. And we're there. And that's what the help of (assistant AD Jim Sargent) and (sports information director Alex Semadeni), just the promotions that they're doing. And the coaches bringing in the Montana, the Montana Kids, we're starting in Great Falls and we're just getting wider and wider circles. And it's neat. There's one time on the basketball team that we had four kids from Great Falls on the floor at the same time, and that's exciting for me being a small-town kid."

MTN Sports: You touched on it a little bit, but what are some of the challenges for this department to keep things moving?

Hashley: "The challenges are never to be stagnant and in conjuring up, 'What can we do next?' And brainstorm, 'What does successful universities look like?' And you steal some of those ideas and and how are they doing it? It's very exciting for me to be a part of conjuring up what the next team needs to be better to be more competitive. And in the midst of that with all the coaches, and the coaches we have here are the best and they're, like I said, they're recruiting in the coaching and the retaining. We have a great, great retention rate for our student-athletes. And so that's all coming from our coaches and they’re top of the line."

MTN Sports: I know you made your rounds around the state with different towns, but did you ever predict you'd be right back down the road?

Hashley: "No. You know, it's funny, a long time ago my wife and I were going to Big Sandy when we were in Kalispell, and we went through Great Falls. And this is 25 years ago, she said, 'If I ever moved to Great Falls, it's going to be up on that hill.' And we're just fortunate that's where we're at right now. But all those stops are our lessons for the next stop in your life and, and they've all helped me and I've learned a ton from all the places I've been to gather the relationships. This is a relationship piece. I mean, that's that's basically what these jobs are. That's why Sarge is so good. And Alex is so good and our whole staff, we have great relationships. And I think that's the big thing that I've been fortunate to have is being able to build relationships and maintain them and go out and get other new relationships, and this is just another town to do it in. Like you said, I've always come to Great Falls. And I remember stopping in McDonald's and our coach would give us $1. And we thought we were in heaven. That's how old I am. But yeah, I'm really excited to be back, and so is my wife, to Great Falls."

MTN Sports: Of all the capacities you've served in athletics between coaching or being an AD or P.E. teacher, what's been the most rewarding part of that for you? Or does each experience serve differently?

Hashley: "It's funny the first year, I left teaching kindergartners in Kalispell, and as an elementary teacher, and it's all about building relationships. And that's what I did. I was at middle school for 25 years and nine years in elementary. It's all about trust and building relationships. And when I got here, as I told Dave, the very first few weeks I said, 'You know, nothing really changes. You're still building relationships and gathering trust.' And that just is with our coaches and everybody across the university who I think has been -- in the last couple of years we have all been working as a team, you know, Argo Central where all the things happen with the kids to get them here and to keep them here, their financial aid piece. Our connections now and the way we intertwine with that part of the campus is amazing."

Hashley: "Oh, golly. Can I remember?"

MTN Sports: I was going to ask, what are your favorite memories?

Hashley: "I was part of the team and I was on the floor to watch the 'Mick and Finny Show' (Montana State's backcourt duo of Mick Durham and Craig Finberg in the late 1970s). That still sticks out in my mind. Again, the relationships with the people in Bozeman, who I still adore and go back there and I wish I had more time each time I went back to visit. The teams we had are all special, the coaches I had were awesome. Coach Harrelson was amazing. I saw him a couple years ago in Arizona and looked him up and those are the relationships that you piece together and maintain and I'd say those are my favorite moments playing-wise. You know, I just worked hard. You know, that's all I did."

MTN Sports: I wanted to get your thoughts on the MSU program right now with Coach Danny Sprinkle coming in. It seems like there's some palpable excitement that hasn't been there in a while. What do you keep tabs on them?

Hashley: "Oh, I definitely do, and Danny has done a wonderful job from Day 1. He has made it really a neat culture to be a part of. He's growing it and you can tell his players are in it with him and they are playing to the best of their abilities ... which is really good. And they have a really nice record, but I think he has really enhanced the culture of what he wants it to look like when he played there. You know, he had some good teams, too. And I think that culture takes a long time. And a lot of people want it right away. It takes a while. He knows that and I'm really proud of the guy. I mean, he's, he's doing the right thing."

MTN Sports: You know, your passion for athletics has obviously rubbed off on your kids, and you touched on a little bit, but what are they up to these days?

Hashley: "My Jaxen, oh, golly. Holli is here in town, and they're co-owners of the Schulte’s 38th Street Store with Rory and twin granddaughters ... 3 years old. Next one: Emilee is in Texas and with Griffin, and they have a daughter, another granddaughter. Cassie is at University of Lincoln with Patrick, they have a boy, so I have a grandson. And then, of course, Jaxen's here."

MTN Sports: What's it been like to be able to watch Jaxen right here in town?

Hashley: "That's been a good part. I don't have to travel much. You know, we used to travel a lot, you know, follow the kids and, it's been a real joy to be in the same university as him and watch him progress as a young man."