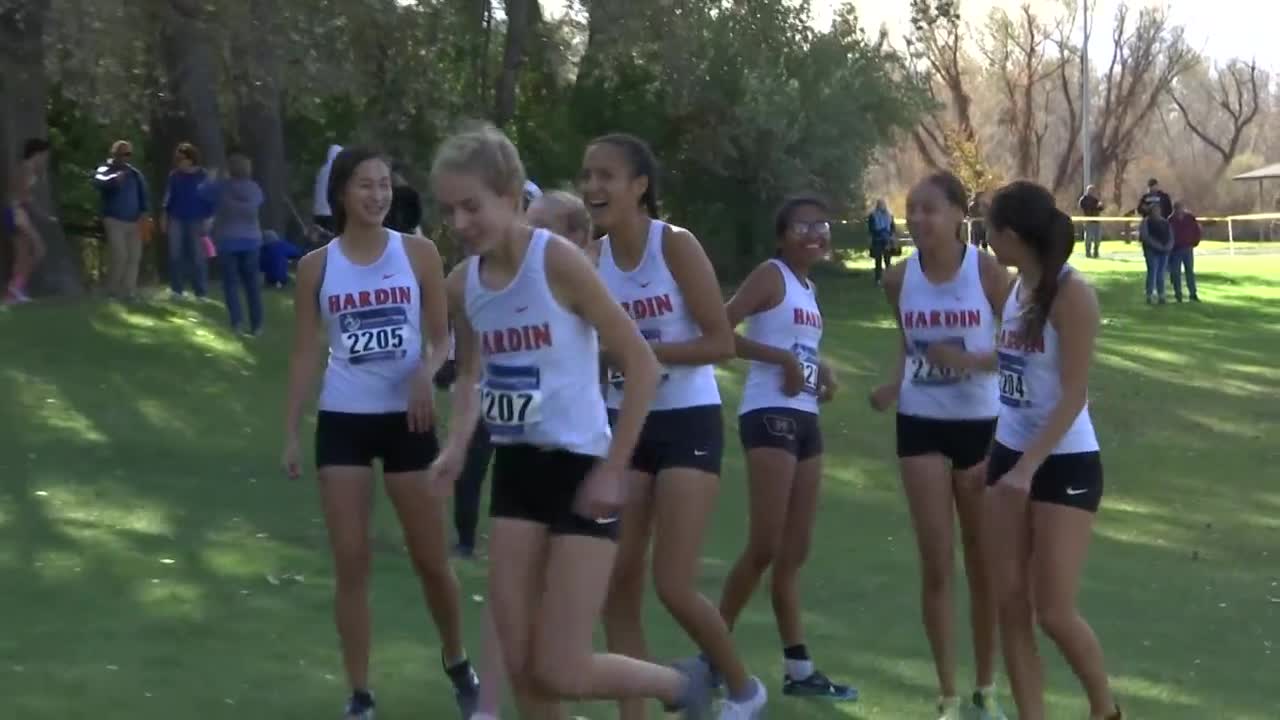 HARDIN — Hardin’s Cindy Farmer has had quite the journey through her athletic and coaching career. A graduate of Superior High School, Farmer continued her basketball career at Montana Western. Following her time at Western, Farmer spent time at Poplar and Belfry before settling in Hardin. Farmer has been an athletic director and head coach of cross country and boys and girls basketball teams. Farmer’s Hardin girls cross country team has won four consecutive Class A state cross country titles, while the Hardin girls basketball team has finished runner-up for three consecutive seasons.

MTN Sports sat down with Farmer just before the Bulldogs captured their fourth consecutive cross country title to talk about her journey to Hardin.

MTN Sports: You’ve been here in Hardin for over 20 years. Let’s go back to Superior when you were in high school, those days and playing basketball there and how that translated to a career at Montana Western.

Cindy Farmer: “I didn’t grow up in Superior, but I graduated there in 1981. I played basketball and track, because that was the only two sports they had at the time for females. I loved basketball, loved competing. We made it to state a couple of years and ended up second or third. I wanted to continue my career – I would love to play basketball, but also money-wise to help, because I had three older siblings. So I got a scholarship to go play at Western for Jim Corr, and just loved it. It was a very, very good experience.”

MTN: Does anything stand out in those years at Western as some of your favorite memories you have from back then?

Farmer: "Two of the recruits that came the same year I did, I actually played against them in high school, like in the championship game. It was always like, you know how you can't stand them and don't want anything to do with them? They ended up being my best friends. We're still the best of friends. So that was kind of neat that you end up actually playing with that same level as you are as a team for the same goal."

MTN: Montana Western is a good education school, obviously. Becoming a teacher, teaching program, education program. Where did that lead you?

Farmer: “That led me into, because playing, I’m very competitive, I love coaching. I love the coaching part of it. I got a lot of that from my college coach Jim Corr. Just loved the way he coached, the way he treated his players, just his demeanor and what he could just get out of the athletes that he had. That just really inspired me to go into coaching and then teaching, because I love working with kids.”

MTN: Before Hardin you were at Poplar, Belfry, you were even the AD at Belfry for a period of time. Your sister was an AD at Hellgate. What was it like being a woman athletic director during that time 15, 20 years ago?

Farmer: “That was tough at Belfry. I’m glad it was a Class C school when I did this, because I even coached the boys. So I coached both the boys and the girls basketball team at Belfry and then was the AD. When I first was coaching the boys, people did not think that a woman should be coaching boys basketball. That was different. Learned a lot from that, and that helped motivate me also to, it doesn’t matter if it’s male or female, you’re teaching them, and you’re going to teach the same way as you would to anybody. That was my belief and that’s why I took the boys job, and that’s why I was AD, because I like to oversee things, too. Overall, it was a great experience. Loved it.”

MTN: For those people that don’t know, haven’t played at Belfry, can you just tell people a little bit about the Bat Cave there?

Farmer: "Oh yeah, oh my God. That gym, it didn't even have -- the 3-point line didn't even go around the whole court. Then it was walls. The seating was up above. You're right, it was just like a bat cave. When I first went there for my interview I was like, 'Oh my God,' because I came from Poplar. They had a huge gym. It was good. Again, and like a lot of the gyms we went to, Joliet didn’t have the full 3-point line and stuff. They didn’t even have the 3-point line in college, and we still played with a boys basketball when I played in college.”

MTN: We’ll fast forward now to your coaching days in Hardin. Cross country season, you guys are chasing another state championship on the girls side. How have you cultivated such a successful program with Hardin on the cross country side?

Farmer: “I think it’s just the culture that we try to build and we are building. It’s continuous. It’s not like it’s just going to stay there, we want it to keep growing. We really believe and we treat every athlete like they’re our own, like they were our kids. I just think that when we started the program and we started getting success, everybody just buys into it. Buys into how you treat them, because you treat them with respect and you treat them like you care for them, like they’re really there for a reason. They can tell. They can tell if whoever is coaching them cares about them as a person, not just about what they can do on the court, what they can do on the course. I think that’s a huge thing and just I think the way we train, it’s like we’re a family. They’re a second family. Really they’re with us it seems like forever. We see them sometimes as much as their parents, so they know they can feel comfortable and do what they need to do.

MTN: As a basketball coach, you’ve been involved with the program for several years. You took some time off in there, but you came back. You brought Hardin to a state tournament. You’ve finished runner-up three years in a row, I believe. Going back to high school, do those second-place losses sting a little more now?

Farmer: “Yes. Yes. It’s like, 'Come on.' We just stay the course. That’s what, like in cross country and basketball, keep doing the right things. Good things are going to happen. We’re going to get there. We’re going to break through. Just always, constantly, we’re training every day to be better and to make each other better.”

MTN: Can you try to put into words the support and the love that the Hardin community has for its athletic programs, especially its basketball teams?

Farmer: "It’s amazing. Even cross country. They go everywhere. They are so supportive. And the whole town. It’s not just the runners’ parents, it’s the whole community. In basketball, you’re right. That’s a whole new level. Boys and girls are playing, so you have both teams playing and it’s phenomenal. Like I always say, they’re our sixth man. We honestly have won games because of our crowd. There’s no other crowd like it. I feel that way with the support that we have.”

MTN: How do you try to describe the atmosphere to people who may not understand the atmosphere of a state championship game, where it’s almost deafening at times?

Farmer: “It’s crazy. It’s like, you just have to focus. You just have to mentally be focused and be in the moment. It’s hard sometimes. They’re 16-, 17-year-old kids and they’re in this environment, and some of them can do that and some of them can’t. You just try to get them to block out everything. I know it’s hard, but in order to be at your best, you’ve got to have that mental fortitude.

MTN: You’ve been in coaching and education for almost 30 years. You’ve got 30 more left, right?

Farmer: “It doesn’t seem like 30. When I look back it’s like, 'Oh my God. I can’t believe I’ve been coaching or teaching for over 30 years.' The kids, they just make it so enjoyable. It’s like they just keep bringing you energy and refilling. Not saying that it’s not hard, because it can be difficult at times. They just make it all worthwhile and they just make you smile and laugh.”

MTN: With all the time you’ve spent here, is Hardin the last stop? Is this home for you?

Farmer: “Yeah. I mean I really can’t see myself going anywhere else. Just the kids, they just make you want to stay.”