In its 62-year history, Yellowstone Country Club has had two head golf professionals. But come January, that number will be three, as Bob Eames will retire after 50 years in the business this December. 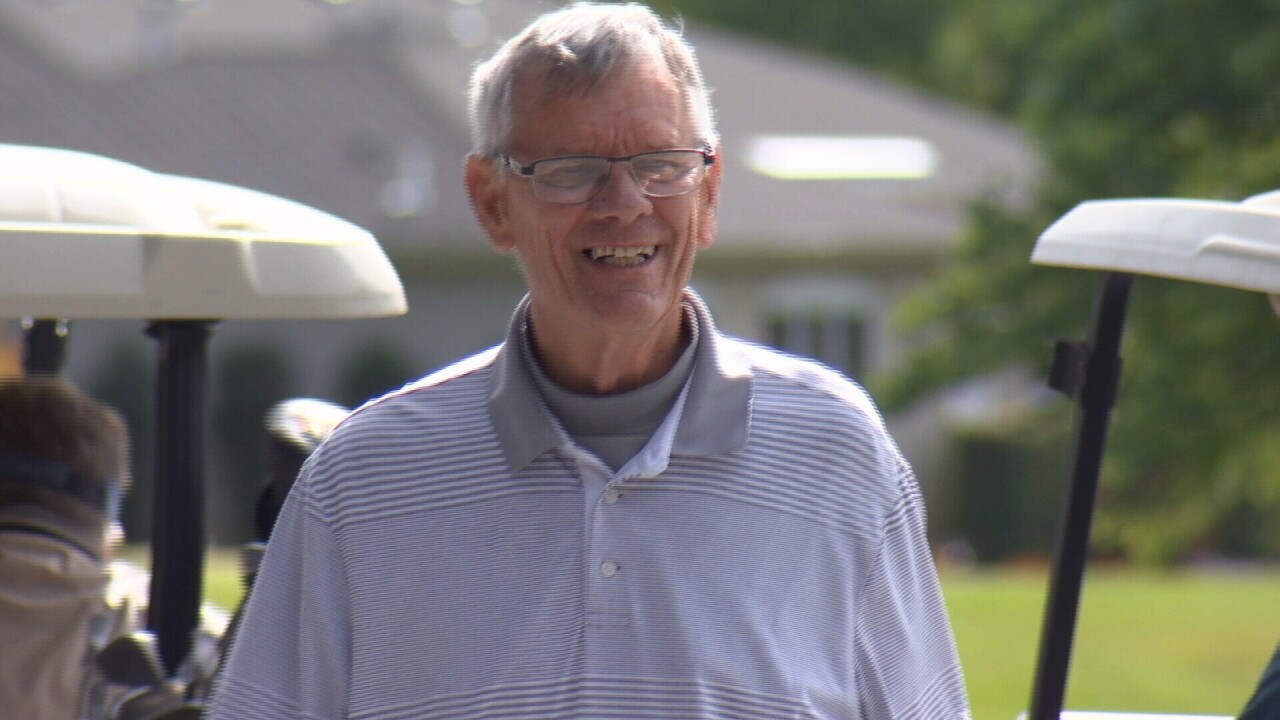 BILLINGS — In the 62 years that Yellowstone Country Club has been open, it's had exactly two head golf professionals. Paul Allen was the first, from 1957 until his retirement in 2004, and since then Bob Eames has presided over one of the Montana golf community's crown jewels. But come January, there will be a third.

Eames will retire at the end of the year, his 50th in the golf world. He started his career at Yellowstone C.C. in 1969, got his first head pro job at Idaho Falls Country Club, and was the head pro at Briarwood Country Club in Billings before moving over to Yellowstone. He last day will be Tuesday, Dec. 31.

Eames sat down with Scott Breen and MTN Sports to talk about the journey, and what's next.

Bob Eames: About Christmas time, I was kind of going over some things and I got to thinking, 'Holy cow. I went to work for Paul Allen April 1, 1969. That means this April, it'll be 50 years.' Scott, you could have knocked me over with a feather. You know, I've been so blessed because I love what I do. I don't have a job - I have a place of employment that I love to go to. If someone would have asked me, I would have said 30, 35 years, but 50 years? I went , 'Holy smokes.'" So it got me thinking about it - 50 years, it's probably about time for me to end my career, knowing full well that I have been very blessed. I don't know that the good Lord could have blessed me more because I'm going to start and finish my career at one of the finest country clubs in the United States of America.

MTN Sports: You told me once that Paul Allen, legend in his own right, is the guy that you learned from. The most important thing that he taught you was that you're not in the sales business, you're in the service business.

Eames: I think the key to Yellowstone Country Club being the club that it is, is we've had three department heads - a manager, a golf professional, and a superintedent - none of which believed that they're in the business of clothing and golf clubs or food and beverage or grass and fertilizer. We're all in the business of service to the membership, and we've had a Board of Directors that have held us accountable, but not micromanage. So we've got four entities all pulling the rope in one direction towards service to the membership. That's why we have had a full membership for the last 40 years.

MTN Sports: How much has golf change 50 since you first got in as an assistant pro, or a bag boy or whatever it was, when you first broke into the business?

Bob Eames: I first broke in just coming out and talking to Paul, asking if there was a place I could go to work, knowing that he was the legend that he was, in that if I could get a job with him, I would pretty much set my career on track for great things. He hired me off the bat, and some of the members thought I could play for a while, so I got the opportunity to play the Tour for two years. You grow up wanting to be a fireman. Well I got a chance to be a fireman. It didn't take me too long to realize there are a lot of guys out there that want to give me one a side and play me for all the money I could muster up, but I did get a chance to realize a dream and see a lot of the country. I came back and went back to work for Paul. At that point in time, Idaho Falls Country Club opened up, and that was my first head job - I went down there for a number of years. Paul was going to retire. The Board and and he convinced me to come up and I'd get the job. I got up here and the oil industry went on its keester. Paul decided not to go up to Red Lodge - he was going to stay here - so I went to Briarwood, and that was a wonderful experience, Briarwood Country Club.

Eames: One of the really neat things is watching young people go to work for you and turn into young adults and watching them mature, whether it's in the pro shop or even in the bag room. They come in at 15 years of age and they they work for two years, and they leave as a 25-year-old. They understand the nature of service and how much service can mean to them, no matter what industry they get into.

MTN Sports: Pro-Ams. You've got to have a Pro-Am story or two somewhere up your sleeve. I don't know if they're air-able.

Bob Eames: An awful lot of them are not air-able! I guess one of the neat things about a Pro-Am is, I always try and take four new people every Pro-Am, and I can get to know you better in four hours in a Pro-Am than I can standing behind the counter for 14 years. You get to know the real person, and the real person gets know who you are too, so Pro-Ams are just a unique experience of getting to know your membership.

MTN Sports: How about your relationships with some of the other pros that have come and gone, for instance Tom Anderson is still here. You guys were the dynamic duo for decades it seemed like.

Eames: Tommy and I have been fortunate enough to team up in the Rocky Mountain Section Pro-Pro Championship, and we've won particularly the senior division I think like six years in a row, then we missed one, and then we won it a couple times. He's such a good player that he carries me along and every once in a while I'll make a par, so he keeps me on the team. But you know, when you've been in the business as long as I have, you've seen some really good golf professionals, and it's really fun to be associated with them, to play alongside them, to get beat by them, and occasionally beat them.

MTN Sports: Your thought just a handful of players that have come through here, and I'm sure I'm missing some, but like the Mike Grobs and the Leslie Spaldings and now, the Brandon McIvers.

Eames: You know, it's really kind of fun to know that you had a little bit of a hand in that. There's some people that are members of this club. I remember Robb Bergeson, who right now is a +3 handicap. I can remember when he was a little guy, we used to post our scores on a board. His name was at the top of the list, and I had to go in and get a footstool because he couldn't reach it - he wasn't tall enough! Again, watching a young boy turn into a young man and a successful businessman like Robb. Certainly, Mike Grob has carried himself well and represented Billings really well. Leslie Spalding has been certainly a peach of a gal, and we stay in contact quite often, so it's been really fun to be part of that.

MTN Sports: What did you always see as the best part of your game? Did you ever have one part your game you just knew you could count on?

Eames: I will go reverse. I knew one game I couldn't count on was chipping. I have gotten to be better in the last month or so because of a new secret. This a secret No. 712 by the way. I should do a book - that would be a long edition! I think the one part of my game that to always stood out with my ability to drive the ball. When I was younger, I was I was really pretty long when I was out on Tour. John Jacobs and Jim Dent hit it farther than me, but those were about the only two. When I was an assistant pro, I stood out and hit drivers from the pro shop down to the driving range every night for two or three years. I got pretty confident with the driver, not only the distance factor, but I knew that I could hit it down the right side or the left side and still keep it in the fairway.

MTN Sports: There have been some pretty big-time people that have played Yellowstone Country Club, and I don't recall if you were here for all of them or not, but take me through the list off the top of your head. I can think of President Clinton and the singer Chris LeDoux. I came out and played a round with him, he invited me out once, and I didn't know him from Adam.

Eames: There have been an awful lot of celebrities have come and gone through Yellowstone Country Club. It's really fun to watch these people come into Billings, Montana, not knowing what to expect, come out to Yellowstone Country Club and go, 'Holy cow, this is a great golf course. What a great facility!' And now, with the new clubhouse that we just opened up in June of this year, what's really fun for me, whether it's our Member-Guest and the guests come in from Chicago, or they come in from Las Vegas or San Francisco, and they come in and look at this clubhouse and say it's not just a great golf course, but what a great facility it is.

MTN Sports: Final question - you haven't gotten a chance to play last couple years, not a lot. What's next?

Eames: The divorce rate amongst golf pros is pretty high. We love our job, we spend a lot of time at it. My wife has been the rock behind m,e for all these years that I've been a golf professional. Starting January 1, we're going to do what she wants, when she wants, and how she wants. She deserves that. She has been so supportive of me and my career, that I can't tell you how much I'm looking forward to turning the tables and doing what she wants, when she wants to do it. You know, we have 17 grandkids. By the way, we got a great grandchild as of a week ago. We're going to spend some time visiting them. Some of them are right herein Billings. Some are in North Carolina. We've got some in the Kaispell, Columbia Falls area, we've got some in the Portland area. So we're going to do a little bit of traveling and go to see our grandkids and what no. But I know one of the things that I'm looking forward to, when I turned 70, my wife got a reunion together, and all five of my kids and 14 of my grandkids showed up at the Flathead Valley. We had a KOA - it was so much fun. But on the way home, I told my wife, I said, 'You know honey? When we retire, I would like to go play East Rosebud and Shelby, all these little courses along the high-line that I've never played before. Let's get in the car and go play all those and tour Montana. I can't wait to do that. I'm hoping to do that this next summer.