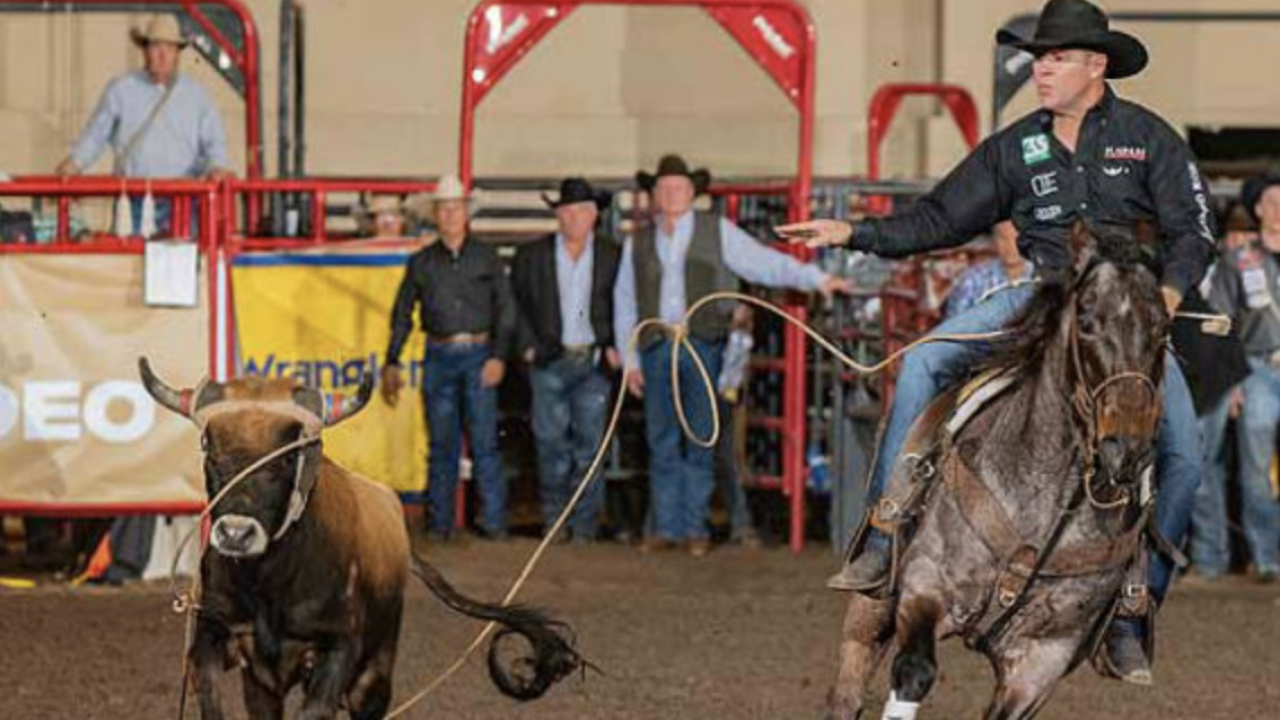 Brazile needed to rope a steer in Round 10 to win the world title and the average – and that's exactly what he did like he's done so many times before in his legendary career.
The Decatur, Texas, cowboy clocked a 12.4-second time in Round 10 to win his record 26th career gold buckle at the 2020 Clem McSpadden National Finals Steer Roping at the Kansas Star Arena.

"If you don't go do your job and you don't execute, somebody else is the world champ," said Brazile, 43. "Once they told me what I was doing, that was it. I just went and made my run. This is awesome. I want everybody to know that my thanks goes to my Lord and Savior Jesus Christ. He blessed me so much. I'm just thankful for the opportunity and the blessings that have come my way, and we were able to capitalize on this."

Brazile's eight steer roping gold buckles are second on the all-time list behind only ProRodeo Hall of Famer Guy Allen's 18.

When Brazile, the last cowboy to compete, roped his steer in 12.4 seconds in Round 10, it gave him the average win because he was the only competitor to tie down 10, and that in turn clinched his world championship.

Snedecor roped right before Brazile, and when Snedecor came up empty it changed Brazile's game plan.

Entering Round 10, Brazile was holding a slim $1,965 lead in the world standings over Snedecor. Brazile also was sitting second in the average, 1.2 seconds behind Snedecor.

"Scott had a steer they had been 9 seconds on, and I had a steer they had been three-tenths longer on in 10, so I was prepared for almost every scenario but that," Brazile said. "He's roped his butt off all weekend, and my hat's off to him. He pushed me as hard as anybody has ever pushed. It is one of those things where I can never let off because he doesn't. He's a great competitor. I was mentally preparing myself to have to be eight seconds. It was a huge difference in the shuffle of the cards right there."

"I think the steer was a little slow leaving out of there and I might have slowed up too much," Snedecor said. "The horse kind of quit me a little early maybe and the steer just rolled over and got up. I felt like I rode good and scored good and got out and had it on him to tie him fast, but it just wasn't my turn.

"I did my part I felt like for 10 steers. I scored and rode good, and it all felt good. I just got out-roped a little bit. Trevor earned it. He roped better than I did for 10 steers. We go lots of miles and it comes down to one steer at the end of the deal. It's all good fun. I still got out of there with good money and I was glad to see him win another championship."

By Round 4 Friday, Brazile reached and passed the milestone by earning $7,577 after placing second with a 9.3-second run. Brazile won Round 3 with a 9.9-second run extending his PRCA record to 74 career total round wins at the Wrangler National Finals Rodeo – in tie-down roping and team roping – and steer roping.

Brazile has won 36 rounds at the NFSR, second only to Allen's 48.

Before the start of the 2018 Wrangler National Finals Rodeo, Brazile announced that season was going to be the final one for him rodeoing full time so he could spend more time with his family – wife, Shada; son, Treston; and daughters, Style and Swayzi.

"I told them I wasn't going to steer rope much next year," Brazile said. "I only went to 20 this year, but I'm not even going to do that next year. I probably will not even go to enough to make the (NFSR), so this is a good way to leave here for me."

Outside of Brazile, Jesse Tierney had a memorable Saturday, splitting the Round 6 win and claiming the Round 7, 8 and 9 titles outright a day after he didn't earn any money in the first five rounds.

"This felt outstanding," Tierney said. "(Friday night) was a real humbling night. I drew some good cattle (Saturday night) and just focused on what I know how to do, and it felt really good to have that kind of success. Winning one round is an honor, winning four is something I never dreamed of."

Tuf Cooper, Brazile’s brother-in-law, finished sixth in the steer roping world standings and by earning $25,903 at the NFSR, he moved into the lead of the all-around standings with $111,450.

“I did pretty good at the NFSR and I have the lead in the all-around now,” said Cooper, 29. “But, Stetson has broncs and bulls each night and I have calves. Who knows what will happen? Stetson might ride all 10 (in his events), who knows? Honestly my focus is winning the world championship in (tie-down) roping. If I win the world championship in (tie-down) roping I’m probably going to win the all-around.

“I’m coming in second (in tie-down roping) and I have a bunch to gain on Shad (Mayfield). What I think is cool about the all-around this year is there are only three guys who have a chance to win it. The cool thing is Stetson, Clay (Smith) and I are all doing different events and it should be a lot of fun to see who wins.”

Wright is third in the all-around with $86,584 and will be competing in saddle bronc riding and bull riding in Arlington. Two-time team roping header world champion Clay Smith ($80,737) also is in the all-around mix as he returns to the NFR with Jade Corkill.