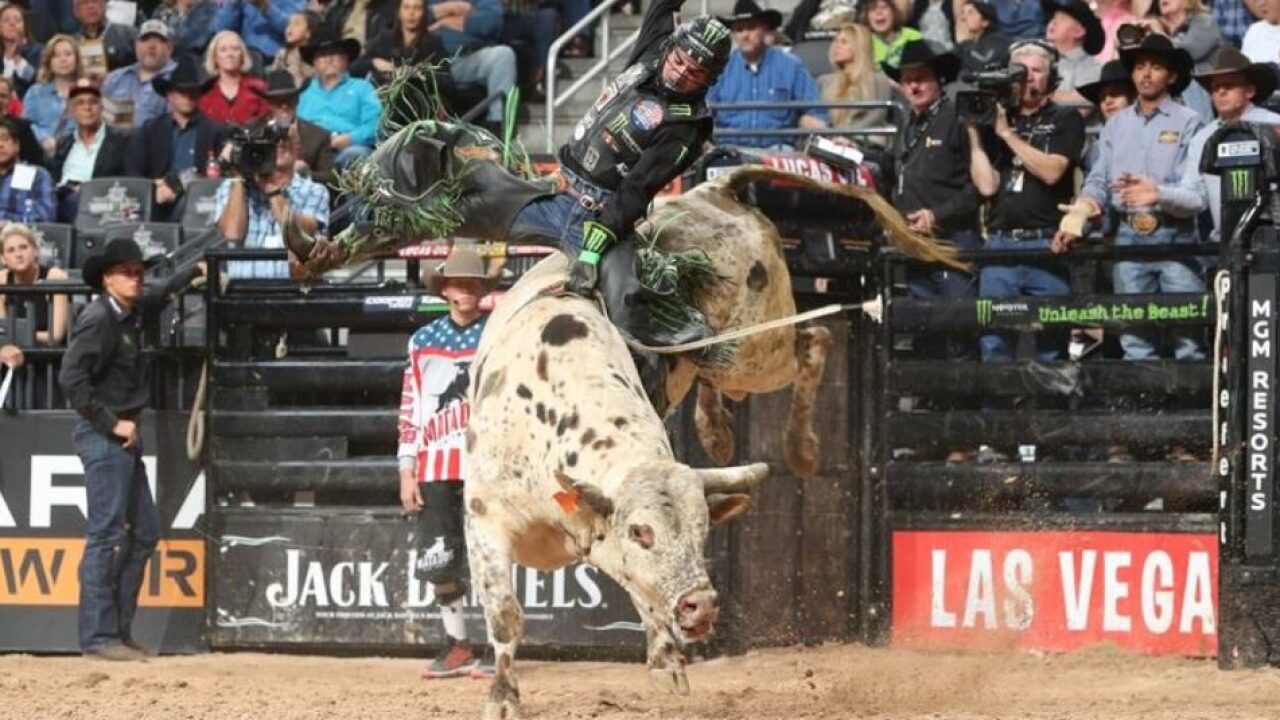 LAS VEGAS – Team Las Vegas began Challenge Day 3 of PBR’s new televised team tournament with a bang, riding to its second shutout victory and improving to 3-0 in Division A. Reigning PRCA All-Around Champion and Captain Stetson Wright (Milford, Utah) headlined his team’s dominating win inside the Pendleton Whisky Let ‘Er Buck Saloon at South Point Arena in Las Vegas with an 87.5-point trip aboard Dynamite Cap (Hart Cattle Co./Randy Wood). After delivering his first qualified ride of the uniquely formatted PBR Monster Energy Team Challenge, presented by U.S. Border Patrol on Saturday evening, Chase Dougherty’s (Canby, Oregon) momentum continued. The Oregon cowboy contributed the team’s second score, an 87.25-point ride aboard Silent Night (Hart Cattle Co./Randy Wood). The 174.75-0 win allowed Team Las Vegas to maintain their No. 2 rank in Division A. They trail No. 1 Team Cooper Tires, also with three wins, by 324 points in the overall event aggregate. Team Las Vegas will next go head-to-head against Team Can-Am on Challenge Day 4 on Friday, June 12. After a hard-fought loss on Challenge Day 1 when it was narrowly bested by Team Union Home Mortgage by 79.75 points, Team Wrangler has been on a downhill skid, shut out in its final two games. Ranked last in the Division A standings, the contingent captained by Colten Jesse (Konawa, Oklahoma) will look to right its course and advance to the championships in Sioux Falls, South Dakota, when the league will welcome back fans to the arena, when they next face off against Division A’s No. 1-ranked roster, Team Cooper Tires.

“They’ve done most of the work,” Captain Stetson Wright said of his team. “They have been packing me on this team, and I have let a few get by me. The have been riding good, and I feel good. This is just awesome. I want the riding to do the talking.”

“Even though (Team Las Vegas) have won three games, they haven’t ridden as many bulls as we would have expected them to,” five-time PBR World Finals Qualifier turned commentary Colby Yates said. “To get through this whole deal, they’re going to have to step up.”

LAS VEGAS – Entering halftime of Challenge Day 3 of the PBR’s new televised tournament, Team YETI looked dead in the water. The winless team was still searching for its first qualified ride of the new PBR Monster Energy Team Challenge. However, with their backs against the wall, Team YETI rose to the occasion, riding two consecutive bulls to come from behind to win a hard-fought battle against Team Can-Am. The battered Team YETI riders led by Derek Kolbaba (Walla Walla, Washington) were trailing 86.5-0 at halftime when Eli Vastbinder (Statesville, North Carolina) made the whistle to jolt his team with newfound confidence. Vastbinder, the team’s alternate who was activated after Cole Melancon (Paris, Texas) reinjured his knee while attempting Big Black Cat (Dakota Rodeo/Chad Berger/Clay Struve/Heald Pro Bulls), reached the requisite 8 aboard Red Rocker (Bland Bucking Bulls) for 85.75 points, inching Team YETI within 0.75 points of the game lead. In a must-ride situation, Captain Kolbaba faced a familiar opponent in Blue Stone (Dakota Rodeo-Chad Berger/Clay Struve/Ken Barnhard). In the rubber match between the two impressive athletes, Kolbaba delivered the team’s go-ahead score when he rode Blue Stone for 87.25 points. Team YETI’s first win was clinched when Team Can-Am’s Ezekiel Mitchell (Rockdale, Texas) was unable to convert in the game’s final out. Also attempting his bull for the third time in his career, Mitchell was bested in a swift 3.72 seconds by Church Bells (Hart Cattle Co./Hale). Courtesy of the dramatic, momentum-shifting win, Team YETI improved to No. 5 in Division A, while Team Can-Am maintained its No. 3 rank. Within the game, viewers around the globe also witnessed some of the event’s most powerful bovine athletes. Red Dawn (Dakota Rodeo/Berger/Struve/Heald Pro Bulls) was the YETI “Built for the Wild” Bull of the Weekend, compliments of his 3.6-second buckoff of Jordan Spears (Redding, California), marked at 44.75 points. On Challenge Day 4 on Friday, June 12, Team YETI will look to continue the positive momentum against Team Union Home Mortgage, while Team Can-Am will look to upset Team Las Vegas, the division’s No. 2 team, undefeated at 3-0.

“This is a ride right here that will get him on track to lead them all the way.” Yates said of Kolbaba’s ride aboard Blue Stone “With a win like this it could give them the momentum that they need.”

“Momentum is everything in this sport,” Eli Vastbinder said. “It’s all confidence, it is what we all thrive on. It’s just good to be on the board.”
“I guess we just needed that early morning wake up call,” Captain Derek Kolbaba added. “I am sure we didn’t really like the way it went the first two days. They aren’t’ going to hold us down forever, that’s for sure.”

“It’s exactly what we needed,” Kolbaba said of Vastbinder’s score, the team’s first of the game. “We’re ready for more. Just to get those rides out of the way. It fuels our fire. We ride as good, if not better than anyone. I am confident in the team we have here. I am confident in every single one of them.”

LAS VEGAS – Challenge Day 3 of the newly launched PBR Monster Energy Team Challenge concluded with the Game of the Week, a matchup between the seemingly unstoppable world No. 1 Jose Vitor Leme (Ribas do Rio Pardo, Brazil) of undefeated Team Cooper Tires, going head-to-head against three-time PBR World Champion Silvano Alves (Pilar do Sul, Brazil) and Team Union Home Mortgage, which went into the showdown with a 1-1 record. As the first rider to explode from the chutes inside the Pendleton Whisky Let ‘Er Buck Saloon at South Point Arena in Las Vegas, Leme conquered The Tickler (Dakota Rodeo-Chad Berger/Clay Struve/Ken Barnhard) for 88.5 points, his fifth consecutive qualified ride of the tournament. Team Cooper Tires’ lead, however, was short lived. Luciano de Castro (Guzolandia, Brazil), riding through an injured hip, evened the score with a matching 88.5-point effort aboard Rising Sun (Dakota Rodeo/Chad Berger/Struve/Heald Pro Bulls). After the game entered halftime tied up, six-time PRCA Bull Riding Champion Sage Kimzey (Strong City, Oklahoma), returning to action after injuring his right (riding) arm on Challenge Day 2, put his team ahead by besting Big Mac (Hodges/Shuler) for 87.25 points. The qualified ride proved crucial for Team Cooper Tires with bull power dominating the remainder of the game and no other rider lasting the full 8 seconds. Courtesy of its hard-fought 175.75-88.5 victory, Team Cooper Tires concluded the first weekend of competition a flawless 3-0. It remains atop the Division A leaderboard, while Captain Leme, now 5-for-6 throughout the entire event, is still in firm control of the Built Ford Tough MVP race. Looking ahead, Team Cooper Tires will look to notch its fourth win against the winless Team Wrangler on Challenge Day 4 on Friday, June 12. Now ranked No. 4 in Division A, Team Union Home Mortgage, who began the PBR Monster Energy Team Challenge with a win, will attempt to reverse its two-game loss streak when it next squares off against Team YETI.

“Having Leme and Kimzey as your one-two punch should strike fear in General Managers across the league,” CBS play-by-play commentator Craig Hummer said. “They knew the target was on their back coming in, and they proved worthy. Team Cooper Tires will have to be reckoned with if you want to win this competition.

“On paper, we are the favorites,” Sage Kimzey said. “There is a target on our back and that is a position I like to be in. We are No. 1 and that is the position everyone wants to be in.”

OUT: Team Wrangler’s Joseph McConnel did not compete on Challenge Day 3 after sustaining a left groin and lower abdominal strain while attempting Moulin Rouge, his first bull of the game, on Saturday night.

OUT: Team Union Home Mortgage’s Luciano de Castro aggravated a chronic right hip injury while attempting Paint The Town on Challenge Day 2. While he remained in competition for Challenge Day 3, he further aggravated the injury while riding Rising Sun, sidelining him for the rest of the game.

COMPETING: Team Union Home Mortgage’s Mason Taylor aggravated his injured right wrist while attempting Short Pop on Challenge Day 2 and did not get on his second bull. After not competing in the first half of the team’s game on Challenge Day 3, Taylor returned to competition to attempt Landslide as the alternate for an injured Castro.

RETURNING: Team Cooper Tires’ Sage Kimzey aggravated an existing right (riding) arm injury while attempting Skitso on Challenge Day 2. He did not get on his second bull on Saturday. He returned to competition on Challenge Day 3.


* Note: This indicates the YETI “Built for the Wild” Bull of the Weekend.

Challenge Day 4 for the 2020 PBR Monster Energy Team Challenge, presented by U.S. Border Patrol gets underway on Friday, June 12 with the next three games of Division A. CBS Sports Network and RidePass will bring viewers LIVE coverage of all the action beginning at 9:00 p.m. ET. CBS Sports will again broadcast the Game of the Week on Sunday.