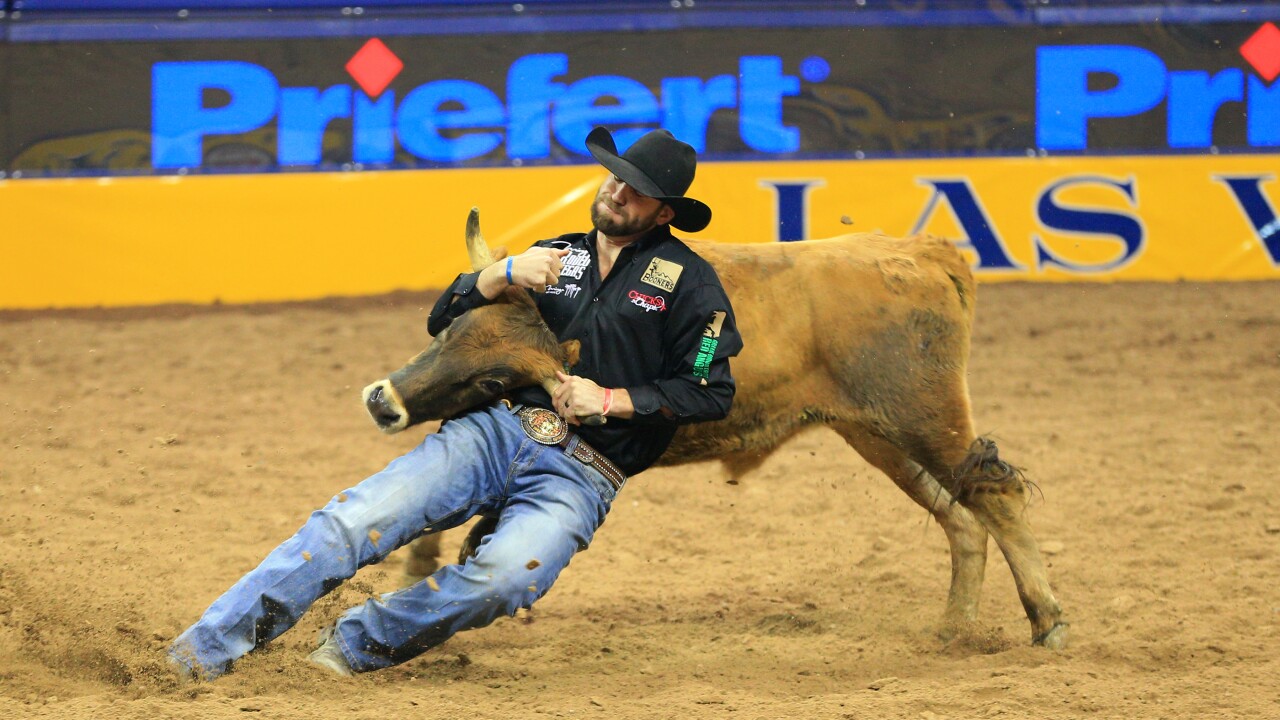 Jackie Jensen Photography for MontanaSports.com
Bridger Chambers wins the round in the steer wrestling at the 2019 Wrangler National Finals Rodeo.

FORT WORTH, Texas – Bridger Chambers has been the runner-up for the steer wrestling world title the last two seasons. Although he’s hungrier than ever for the gold buckle, he was facing a tough decision – rodeo full time or return to working full time.

Scoring a $6,000 boost in the world standings in a single day helped the Stevensville cowboy make his decision.

“I don’t really have a job outside of rodeo, and I’d have to choose one or the other,” Chambers said. “I think I doubled my (world) standings total, and it’s awesome. It’s a good opportunity and makes that decision easier to make.”

Chambers was 46th in the PRCA | RAM World Standings with $6,778 before winning Bracket 4 of the Super Series Finish in Fort Worth on Saturday.

“You can go broke rodeoing hard, especially this year, so you have to be very strategic in how you proceed,” Chambers said.

“Before, I never considered myself a contender with it, but going through that maybe I proved it to myself,” Chambers said. “Now I know I have the ability to get there. Now that’s the main goal, you don’t want anything else until you reach the top.”

Chambers practiced a lot during the COVID-19 hiatus, but he was more excited about the other rare opportunity that came with being home for the spring.

“It was awesome to get the time off to reconnect with my wife and four kids,” Chambers said. “I hadn’t seen them much when going hard, so there was some good that came out of it. Spending time with them is super important.”

Just like a fast steer wrestling run, it was a zero to 60 transition back into competition, as Chambers and everyone else at the Super Series Finish dived back into action with three rounds in a single day Saturday to determine the winner of Bracket 4.

“Usually you pull in with 20 minutes to warm up and then hit the road,” Chambers said. “But here, it’s all day, and that makes for a long day for you and your horses. But we have also not done anything for more than two months or however long it has been, so we’re all excited to be doing something.”

Chambers tied for first in the first two rounds and placed third in the final round to win Bracket 4 with 13.0 seconds on three head.

“It’s awesome to be competing again,” Chambers said. “Everyone feels the same way and is wearing a mask. It may be an inconvenience, but at least we get to rodeo.”

The empty stadium changed the vibe of the competition, but fans saw it all by tuning in to The Cowboy Channel or logging on to the PRCA and the Cowboy Channel Plus App. Even Chambers' dad saw him win via broadcast, which was presented in part by the hit-show "Yellowstone."

“I have my dad here (in Fort Worth), but he’s watching it on TV and that’s a bummer,” Chambers said. “That’s the longest he’s traveled to watch TV.”

“The cowboys miss them (the fans),” Chambers said, adding how appreciative he is of the support. “It’s hard to have a rodeo without fans and being away (from competition) you don’t know how much you miss something until it’s gone.”