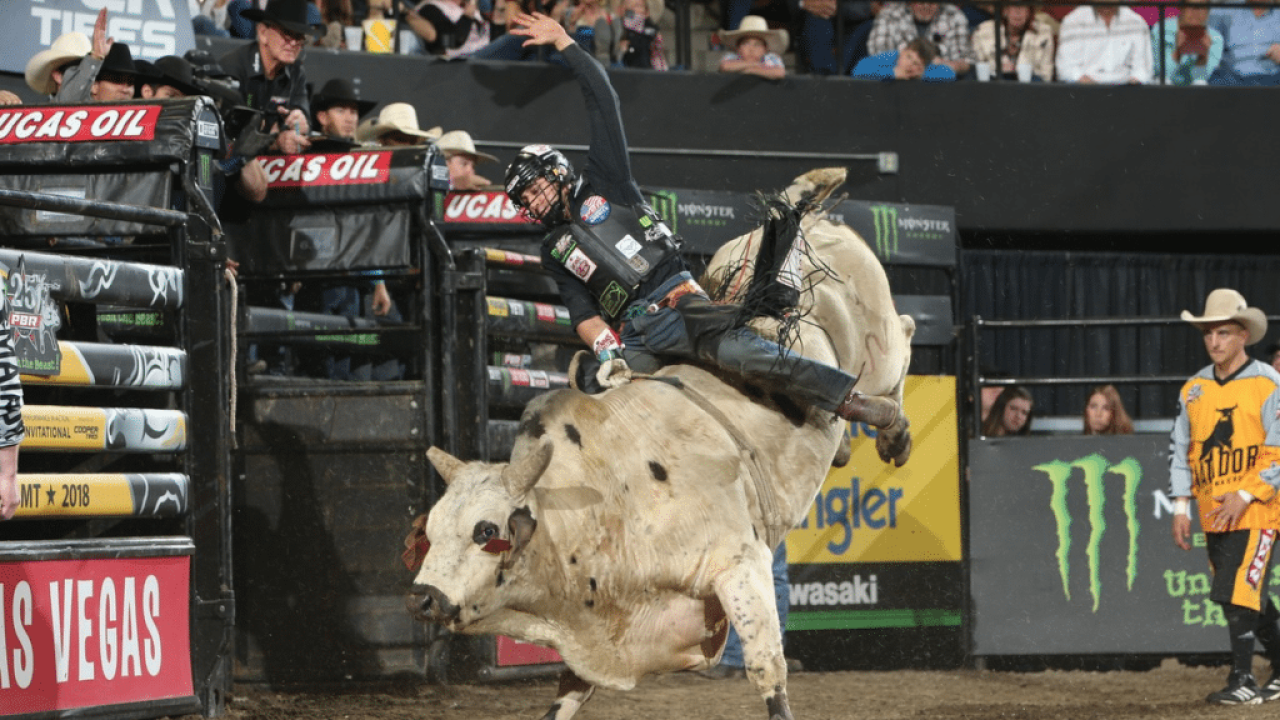 “He can ride anything,” five-time PBR World Finals qualifier turned commentator Colby Yates said of Leme on RidePass, PBR’s western sports digital network, which along with CBS Sports Network carried the action live. “There has been no rest for this guy. He has been working. He has been practicing, every single day.”

“All the rides are very important for us,” Jose Vitor Leme said following Team Cooper Tires’ first game. “There are a lot of good teams, and I am so grateful for these guys to help my team win today.”

“I wouldn’t rather be riding with anyone else,” Sage Kimzey added. “We’re definitely here to win.”

“A win is a win,” Yates said on RidePass. “It’s just like a football game when you win by only a touchdown or an extra point. If a team plays terribly, a win is a win and that’s what matters”

“This place is awesome,” Team Las Vegas’ Captain Stetson Wright said. ”I have never been to anything like this. It is just an unreal experience for all of us.”

LAS VEGAS –Challenge Day 1 for the PBR Monster Energy Team Challenge ended in the most fiercely contested game of the night, a dramatic ride-for-ride battle between Team Union Home Mortgage and Team Wrangler that was decided by the final out inside South Point Arena. In a must-cover situation, the night’s final rider, three-time PBR World Champion, and captain, Silvano Alves (Pilar do Sul, Brazil) rode Gambini (Dakota Rodeo/Julie Rosen/Clay Struve/Chad Berger) for 85 points, propelling Team Union Home Mortgage to a 337-257.25 victory. Earlier in the evening, the veteran Brazilian covered All It Takes (M Rafter E Bucking Bulls/Miller Farms) for 82 points. Also recording rides for Team Union Home Mortgage were Mason Taylor (Maypearl, Texas) who made the 8 on Ain’t Done Yet (M Rafter E Bucking Bulls/Miller Farms) for 85.75 points, and Luciano de Castro (Guzolandia, Brazil) who covered Anthrax (EVP Bucking Bulls) for 84.25 points in a rematch. Leading the valiant effort by Team Wrangler was Roscoe Jarboe (New Plymouth, Idaho). Going 2-for-2, the Idaho cowboy is now atop the leaderboard for the tournament’s Built Ford Tough MVP honor.

“Every single rider on Team Union Home Mortgage played a big part in this,” Yates echoed on RidePass.

“I just focused and rode my bull,” Silvano Alves said following the victory. “Stay here to help the guys, who had helped me. Thanks to god for winning this game.”

“It was all up to him,” Alves’ teammate Mason Taylor said of the pressure on the veteran Brazilian. “I just tried to do my job, ride both bulls I got on. I definitely let one get by me. I’m just glad I got the team that I do, and hopefully we’ll keep the ball rolling.”

Here are the current standings for Division A after Challenge Day 1 of the 2020 PBR Monster Energy Team Challenge, presented by U.S. Border Patrol:

Here are the game match-ups for Challenge Day 2 on Saturday, June 6, for Division A of the 2020 PBR Monster Energy Team Challenge, presented by U.S. Border Patrol:
Team Cooper Tires vs. Team YETI

Challenge Day 2 for the 2020 PBR Monster Energy Team Challenge, presented by U.S. Border Patrol gets underway at 9:00 p.m. ET on Saturday, June 6. All the action will be broadcast LIVE on CBS Sports Network and RidePass.