'Nobody in the seats'; PBR bucks without crowds 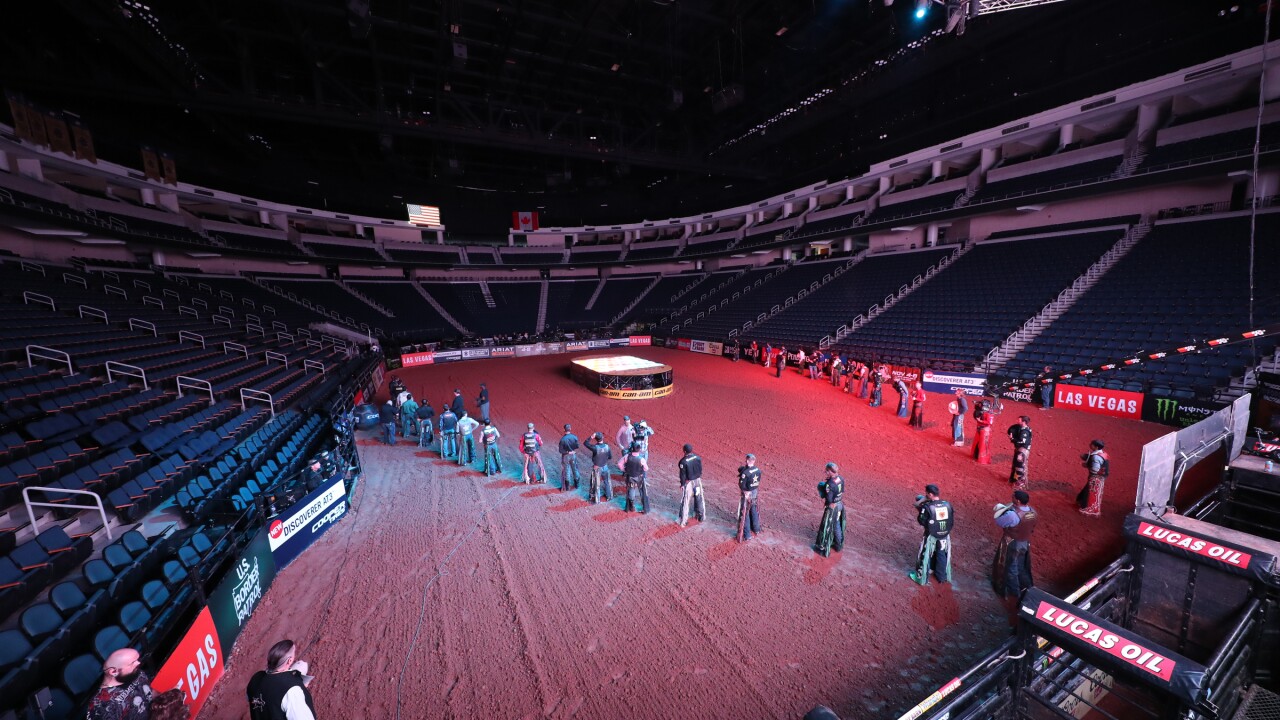 Photo By: Andy Watson @BullStockMedia.
Riders are announced in an empty arena during the second round of the Duluth Unleash The Beast PBR.

BILLINGS -- The Professional Bull Riders Tour (PBR) is one of your last sports standing amid today's Coronavirus COVID-19 scare, and it made for one of the most bizarre weekends of Flint Rasmussen's storied career as a bull riding and pro rodeo entertainer.

"I was getting ready to spend the weekend here at the Class A basketball tournament," said the Choatau native who's temporarily calling Billings home.

Casually chatting with MTN Sports Monday in the lower parking lot of First Interstate Arena in Billings, home to last week's Class A championships site, Rasmussen recalled a wild week where nearly every college and professional sports event was either canceled or postponed. Except his.

The PBR show went on Saturday and Sunday in Duluth, Georgia, about 30 miles north of Atlanta.

"We had our two announcers there," Rasmussen recalled back home less than 24 hours after the event wrapped up. "We had Brad Narducci on the music, mixing the music like he would a normal show, so there was energy in there. We kicked the music up a little, the announcers announced like they normally would. The arena was set with all the sponsor signs. Everything looked the same."

"Nobody in the seats," he said.

Duluth's Infinite Energy Center holds a seating capacity that holds up to 13,000. Rasmussen says Saturday night's PBR performance generally sells out or comes close. But not this time due to last week's tornado of virus precautions. No sellout. No half-empty arena. No fans at all.

Leagues like the NBA, NHL and PGA, among others, put their seasons on hold. College basketball's March Madness was canceled, as were several spring sports seasons in college and high school athletics. And that's just the beginning.

Some considered playing in empty arenas. The PBR followed through.

"What went into it really, was, these bull riders, the independent contractors, you, our cameramen, everybody is dependent on the PBR," said PBR CEO Sean Gleason during a telecast on CBS Sports Newtork. "This entire industry is based around our events, and if we don't have them, they don't get paid."

Rasmussen's normal gig is to dance, entertain, interact and joke with fans. But when he found out there wouldn't be any: "I, of course, made calls. 'What am I doing to do? Do I come, do I stay home?' (They said), 'No, you're coming.' So I helped a little with CBS. I helped with RidePass, our streaming network, with some broadcasting. But at least I get to work."

The PBR live-streamed the weekend's two-day event online with its RidePass and, as usual, it was televised on CBS Sports Network.

This weekend's upcoming stop in Glendale, Arizona is officially canceled. But, as promised, the show is set to go on, meaning Gleason and Co. are really getting creative.

"We are taking this entire tour and moving it to a controlled environment in Pueblo, Colorado," Gleason continued in his CBSSN interview. "We're going to buck bulls the next two weekends. There wasn't even an event in Glendale, but we're going to create one and run live TV."

Rasmussen compares the make-shift setting to an arena not far from his native Choteau.

"Kind of like the Four Seasons in Great Falls," he said. "Rented it, going to build the arena exactly like it looks on TV. They've got a couple floors of a hotel there for all of us."

He also stresses that nobody involved in the PBR production is pressured to be there.

"This isn't a (situation like), 'We're cowboys, we're going to keep going.' Not at all. Every rider that's there, they don't have to be there," Rasmussen said.

They're all scheduled to be here four weeks from Friday at First Interstate Arena in Billings, continuing the PBR's longest-running stop on tour. This April 17-19 would mark 24 straight years in the Magic City despite being the smallest city on tour.

It's nearly five weeks out, but in a culture where suddenly virus warnings, precautions and orders seem to change by the minute, it's anyone's guess to whether the show will go on -- this weekend or in Billings.

"I would love to tell everybody, 'Oh yeah, we're a month away, Billings is happening,'" Rasmussen said with the arena over his shoulder. "I don't know. I didn't know if I was going to get to buy bread in Alberston's today, so ..."