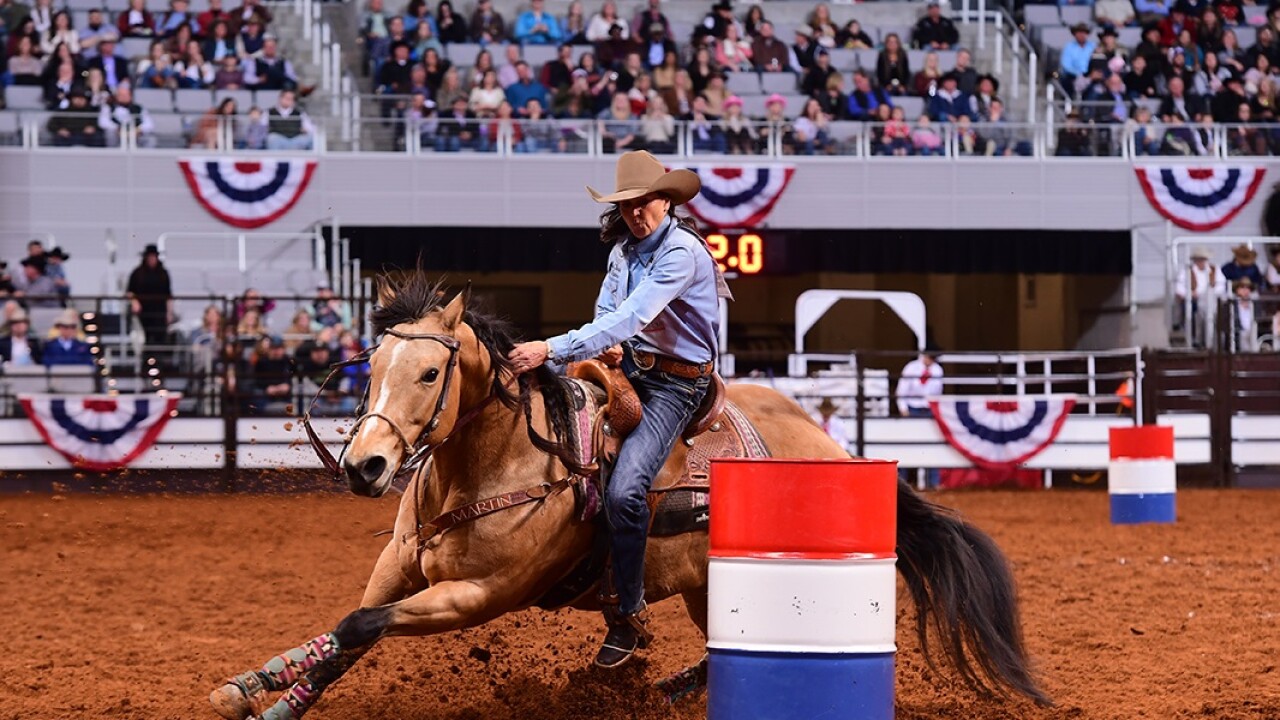 FWSSR photo by James Pfifer
<i>Lisa Lockhart of Oelrichs, South Dakota, rode her buckskin mare Rosa to win the barrel racing in Semi-Final B of the Fort Worth Stock Show &amp; Rodeo’s ProRodeo Tournament. Her time of 16.39 seconds earned her $4,000 and a berth in the championship finals Saturday, Feb. 8.</i>

FORT WORTH, Texas – Montanans dominated the barrel racing event during Semi-Final B Friday night at the Fort Worth Stock Show & Rodeo, claiming three of four championship round spots.

Saddle bronc rider Spencer Wright had the high marked ride of the whole rodeo so far when he scored 90.5 points on Calgary Stampede’s horse named Stampede Warrior. That was just a half-point shy of the highest recorded score in the history of the rodeo.

Wright, the 2014 world champion, got $4,000 for his ride. He will try to expand on that in the finals where the champion will leave with a $20,000 check. Also advancing are Wyatt Casper from Pampa, Texas; Mitch Pollock of Winnemucca, Nevada, and Colt Gordon from Comanche, Oklahoma.

Tie-down roper Tyson Durfey grew up in Missouri, but also chooses to live in the area. He made the trip from his home in Brock to compete and finished with the fastest run of the night at 7.8 seconds. He’ll be back on Saturday as will Adam Gray from Seymour, Texas; Tuf Cooper from Decatur, Texas, and Tyler Milligan from Pawhuska, Oklahoma.

In the steer wrestling, Louisiana and Mississippi took top honors. Jacob Talley, of Keatchie, Louisiana was first with a time of 4.1 seconds. Close behind was Byhalia, Mississippi’s Will Lummus with a 4.2. Jacob Edler from State Center, Iowa, and Bridger Anderson, from Carrington, North Dakota also advanced.

Sisters Anna and Cassie Bahe of Grantsville, Utah, are among the first breakaway ropers in history to compete for a FWSSR rodeo championship. Anna’s time of 2.3 seconds tied for first with Shai Schaefer from Torrington, Wyoming. Cassie’s time of 2.5 tied for third with Stephenville, Texas resident Jackie Crawford.

The fastest run in the team roping went to Tyler Wade from Terrell, Texas, and Billie Jack Saebens, from Nowata, Oklahoma. They stopped the clock in 5.2 seconds. The next three runs were separated by just one-tenth of a second each. Lane Ivy from Dublin, Texas, and Joseph Harrison, from Marietta, Oklahoma had a 5.3. Britt and Jake Smith from Broken Bow, Oklahoma finished third with a 5.4. Charley Crawford, from Stephenville, Texas, and Logan Medlin from Tatum, New Mexico got the final slot with a 5.5.

Two bull riders made it to the eight-second mark on Friday and they both hail from Oklahoma. At the top of the board was Strong City’s Trey Kimzey with an 86-point score on Rafter G Rodeo’s Texas Red. Fulton Rutland of Stilwell finished second with 84. Based on qualification rules, Trevor Kastner from Roff, Oklahoma and Jeff Askey from Athens, Texas, will also compete for the championship.

Saturday night’s Championship Round will be the culmination of this year’s rodeo. Action gets underway at 7:30 p.m.

The following are unofficial results from Semi-Final B of the FWSSR ProRodeo Tournament at the Fort Worth Stock Show & Rodeo. The top four from this round advance to the finals on Saturday: