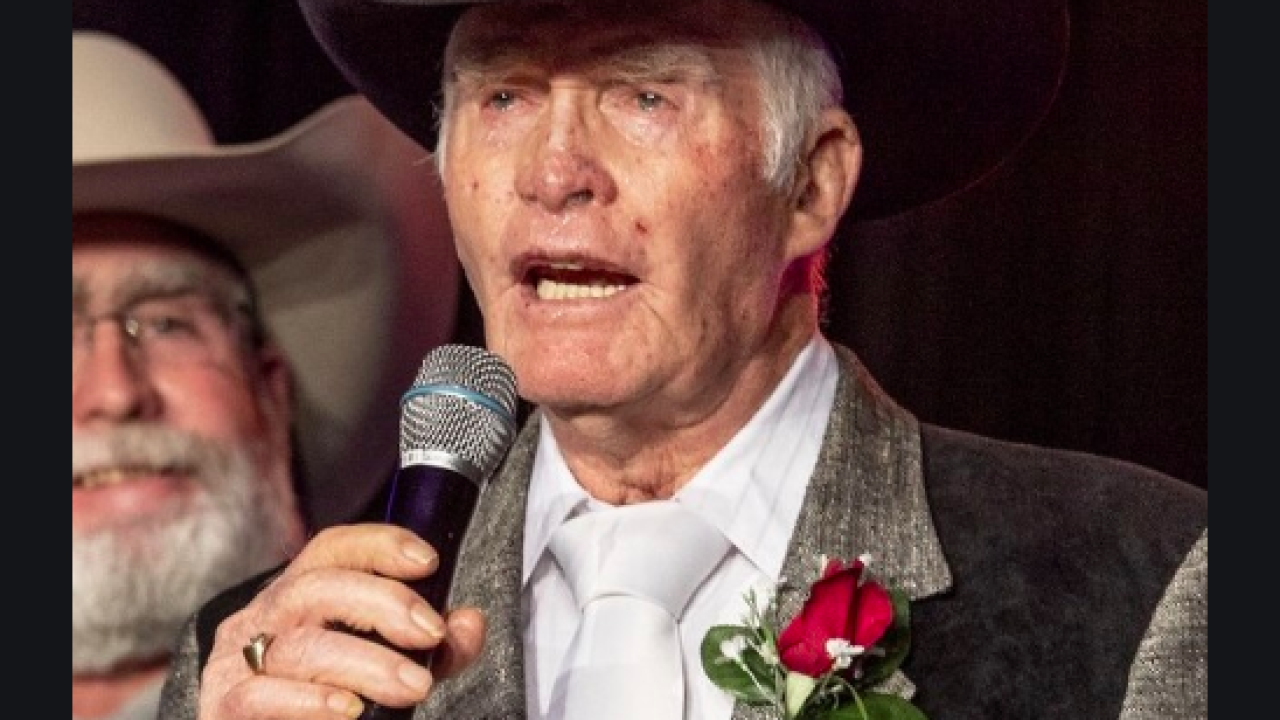 Virginia, the matriarch of the rodeo-oriented Honeycutt family, passed away Dec. 1, 2018. She was 76. Roy and Virginia started the Honeycutt Rodeo Company in 1976 in Alamosa, Colo. They traveled across the country and the world producing rodeos – every performance held on a Sunday included cowboy church.

Their son, Jerry, has owned Honeycutt Rodeo Company since 2012.

The Donita Barnes Lifetime Achievement Award was presented to Roy at the PRCA Awards Banquet at the South Point Hotel & Casino in Las Vegas on Dec. 4.

“I don’t know what to say,” said Roy, when notified he was receiving the award last year. “This is emotional. It is great to receive this honor. I’m very excited. This is a big deal.” Jerry Honeycutt understands what his father has meant to the sport of rodeo.

"In the rodeo business tradition means a lot," Jerry said. "We as a younger generation got to step in and realize the fruits of guys like my dad, Walt Alsbaugh, Harry Vold, Cotton Rosser, Mike Cervi, Neal Gay and guys I've missed who came before us they deserve a lot of credit. My dad started from nothing and established a lot of stuff. He did it on his own, and I'm proud of him for that fact. I'm also proud of him raising a great family in the midst of all of it."

Jerry, his younger brother, Scott, and younger sister, Janet, all worked in the rodeo business with their dad.

In 1886, Honeycutt’s great-grandparents homesteaded to Alamosa from New York. Virginia was the daughter of Walt and Alice Alsbaugh. Walt Alsbaugh was inducted into the ProRodeo Hall of Fame in 1990 under the stock contractor category. Virginia’s brother, Art Alsbaugh, and his wife, Linda, were the recipients of the 2012 Donita Barnes Lifetime Achievement Award.

“I was involved with my father-in-law, and I appreciated that so much,” Roy said.

"He (Roy) had a truck and trailer, but he didn't own any bulls or horses, didn't own one saddle, not one flank, nothing," Jerry said. "He got along with people and leased everything from my grandpa (Walt Alsbaugh). At that time, my grandpa was running 700 to 800 head of horses and 200 head of bulls. My dad would pay my grandpa a lease, and then my dad would go put on his own rodeos."

As a former rodeo contestant and producer, Roy took things he liked and incorporated them into his own outfit.
"He liked bucking horses, but he liked the pageantry," Jerry said.

The Honeycutt Rodeo Company has been one of the few rodeo stock contractors to have been a part of every National Finals Rodeo since 1976.

In 2010, Honeycutt Rodeo received the Family Heritage Award from the WPRA.