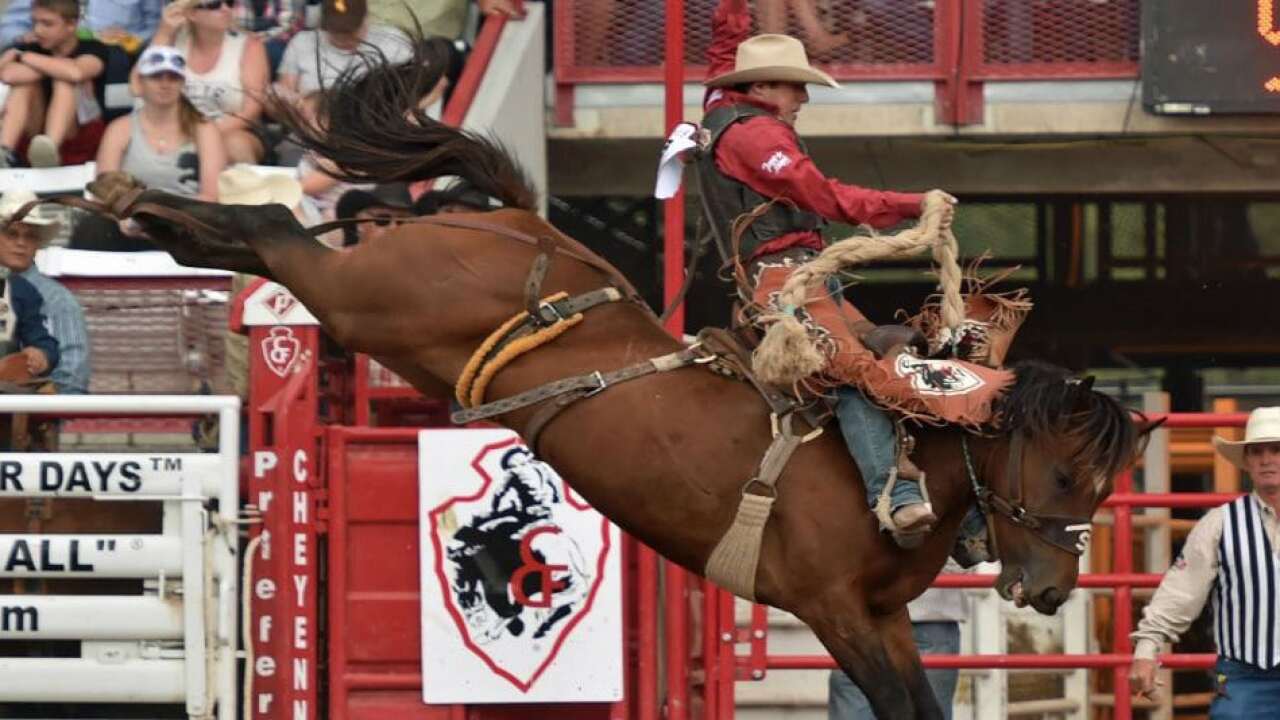 Dan Hubbell
Cheyenne’s Brody Cress moved to the top of the leaderboard at the fifth performance of the 122nd annual Cheyenne Frontier Days Rodeo. Cress leads the first round with an 88-point ride on Smith Pro Rodeo’s Utopia for 88 points.

RAPID CITY - History was made Aug. 22. For the first time in ProRodeo history, there was a saddle bronc riding Xtreme Broncs Tour Finale.

Reigning PRCA World Champion Wade Sundell and Brody Cress shared in the memorable moment as they split the title.

Sundell and Cress each notched 178 points in the two-head average.

“I've been looking forward to this deal for a long time,” Sundell said. “Having this amount of money and the crowd that was here, it was outstanding, and it was an amazing feeling to win.”

“I’m just so thankful for the guys who took the time to put something like this together,” he said. “It’s outstanding for us to be able to have Xtreme Broncs matches, and they took it a step further and gave us a Finale with $50,000 added. That was amazing. There could have been 22 other guys who came in just as well. The set of horses they put together and the crowd here was ecstatic with every ride. It was one of the coolest things I have ever been a part of. This is going to keep growing and getting better, and it's going to be an event you’re looking forward to every year.”

The top 12 saddle bronc riders in the PRCA | RAM World Standings and the top 12 in the Xtreme Broncs standings competed in the Finale. The top eight advanced to the finals. The Xtreme Broncs Finale will air on CBS Sports at a later date.

The PRCA's latest world standings can be seen here.

“He (Professional Lunatic) gives you every chance you need,” Cress said. “He took a little scoot and stacked and circled around to the left and was awesome.”

The Hillsdale, Wyo., cowboy broke his right ankle following his 86-point ride on Burch Rodeo’s Professional Lunatic at the Home on the Range Champions Ride in Sentinel Butte, N.D.

“When I jumped off, I got hurt, and it was much better (Thursday night),” Cress said.

“It takes a lot off a guy's shoulders winning a good chunk like that and bumping him up in the standings a little bit and getting off that bubble,” Sundell said.

In the first round, Sundell had an 86-point ride on J Bar J’s Bullet Proof. Cress, meanwhile, had an 88-point ride on Burch Rodeo’s Professional Lunatic.

“For the top eight guys in the short round, we all had to draw out of a bucket to pick our short-round horse,” Sundell said. “I was talking to my old buddy Chad Ferley (2006 and 2013 PRCA Saddle Bronc Riding World Champion) and told him I think Lunatic from Hell would look pretty good. He said that would be really good. Sure as heck, I pulled him out of the bucket, and I couldn’t believe it. I thought, ‘Yes, this is all working out the way it is supposed to.'”

Sundell didn’t have to do any homework on Lunatic from Hell. Sundell had a 91-point ride on the horse to win the final round at the Home On The Range Champions Ride, Aug. 3.

“That horse was amazing,” Sundell said. “He had a couple of moves right there and just stacked up and I did my part. It was fun. I love that horse.”

This was Sundell’s third 92-point ride this season. He had 92-point trips on Frontier Rodeo’s Medicine Woman in San Antonio and Flying 5 Rodeo’s Spring Plantin in Reno, Nev.
With the pressure on, Cress didn’t flinch. He posted a 90-point ride on J Bar J’s Hell on Hooves to tie for the win.

“That horse was hard to get along with in the chute,” Cress said. “They opened the gate and the horse stalled. Then she jumped out and was really good. She was dang-sure bucking, and I knew if I just gassed it and did my job that it would work out well. With the caliber of horses and guys who were getting on (Aug. 22), my mindset was to just go at them. I wasn’t going to safety up.”