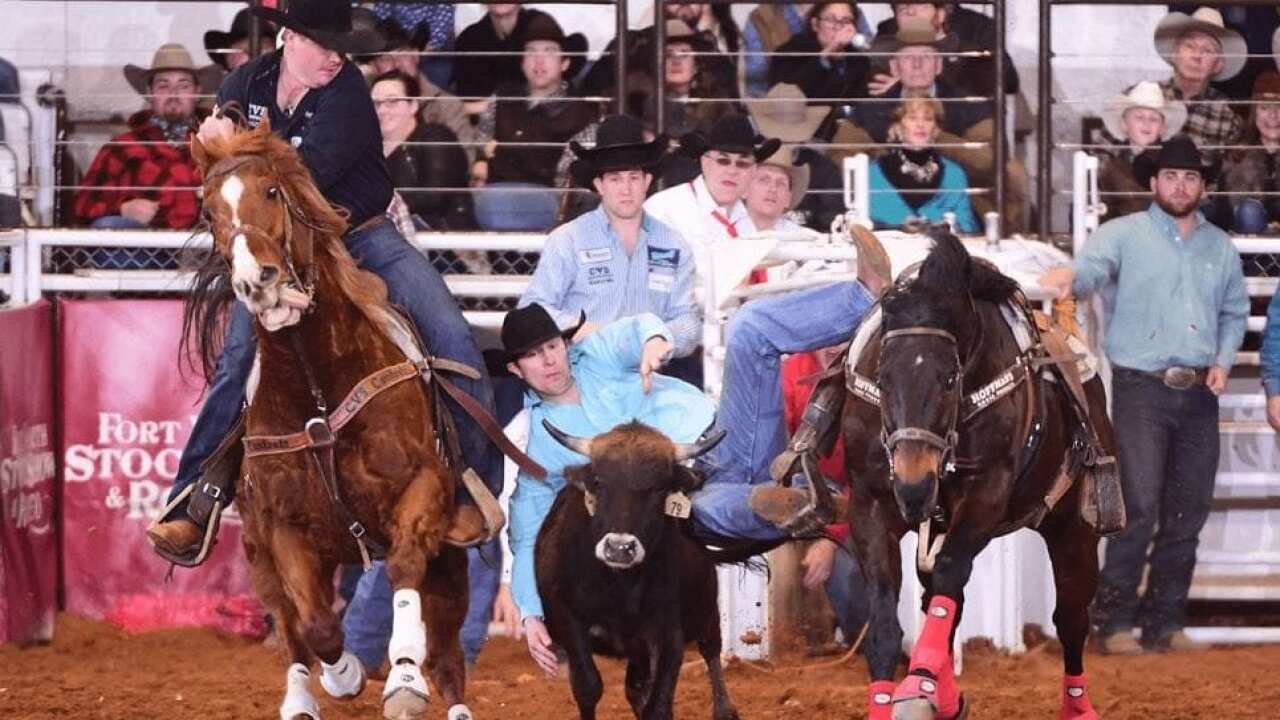 Brendan Laye, the 2018 Steer Wrestling Rookie of the Year from Consort, Alberta, wrestled this steer in 4.3 seconds in the second round at the Fort Worth Stock Show & Rodeo. (FWSSR photo by James Phifer)

He also won the Xtreme Bulls title on that final day in 2014, and there was little question that he was going to go on and do great things in his career. And he has. After winning over $40,000 that counted in the Professional Rodeo Cowboys Association world standings that year, he qualified for his first of six Wrangler National Finals Rodeos in Las Vegas, Nevada, where world champions are crowned.

Each time that Kimzey has left Las Vegas, it has been as the new world champion. He set a goal as a child to beat Don Gay’s record of eight bull riding world titles and is steadily closing in. San Antonio’s rodeo and bull riding have been instrumental in his success through the years. He won the rodeo again in 2016 and has gotten money each of the six years he has competed in the AT&T Center.

Make that seven. Kimzey had his first ride at the 2020 edition of the show on Monday night in Bracket 3. He was one of three men to ride a bull and finished in a tie for first place. Kimzey rode a bull from Powder River Rodeo as did Jordan Hansen from Ponoka, Alberta. They each scored 88 points and won $2,500. Kimzey’s ride was aboard Flight Risk, while Hansen’s success was on Danny Boy.

The other rider to make it to eight seconds was Trey Benton III from Rock Island, Texas. He scored 86 points on Powder River’s Kilroy for $1,500. All three of them will make their second-round ride on Tuesday night and third on Wednesday. At the conclusion of Wednesday’s rodeo, the top four money earners in each event will advance to the Semifinals. With the money that Kimzey and Hansen won on Monday, their positions are nearly secured.

But none of them will be sitting back waiting for the rest of the field to cash in. The money adds up fast and will determine who is the 2020 San Antonio Stock Show Rodeo champion, so every dollar earned is important. Kimzey knows from experience. He has earned money every year that he has competed here and with what he got on Monday night, that total is well over $170,000.

Bracket 3’s second round will begin Tuesday night at 7 p.m. in the AT&T Center.