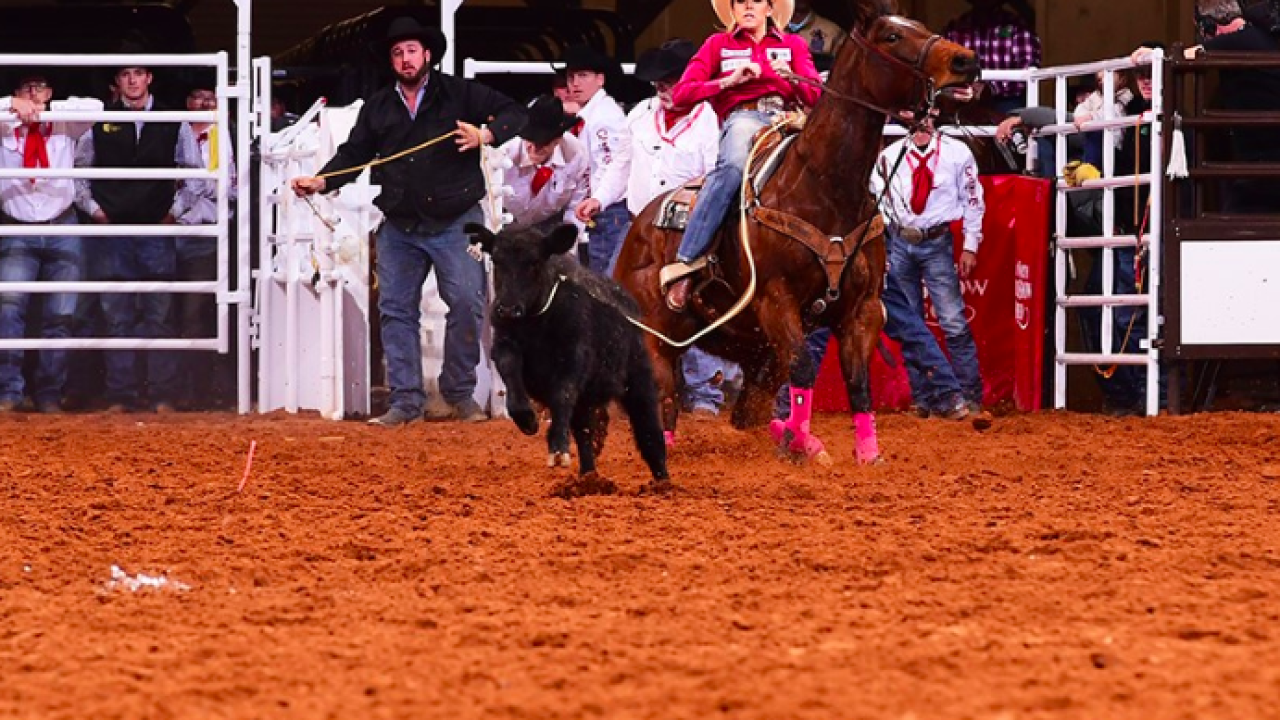 FWSSR photo by James Pfifer
<i>Cadee Williams, a Montana native who now lives in Weatherford, Texas, won the breakaway roping in Semi-Final A of the Fort Worth Stock Show &amp; Rodeo’s ProRodeo Tournament. Her time of 2.5 seconds earned her $4,000 and a berth in the championship finals Saturday, Feb. 8.</i><br/>

FORT WORTH, Texas – It’s taken 15 rodeo performances, countless runs and rides to be among the first qualifiers for the Fort Worth Stock Show & Rodeo ProRodeo Tournament Championship Finals.

When the dust settled Thursday night Beldgrade native Cadee (Tew) Williams won her semifinal round of breakway roping advancing to Saturday's championship round. The Montanan-turned-Texan stopped the clock in 2.5 seconds. Jordan Jo Fabrizio from Canyon, Texas made history when she won the title at Cheyenne Frontier Days last July. She finished second on Thursday. Rounding out the field is Martha Angelone from Aledo, Texas, and Tanegai Zilverberg from Holabird, S.D.

Action all started in the new Dickies Arena on Jan. 24 with the first of seven brackets. The top four money winners in each event advanced from the brackets to the Semi-Finals or the Wild Card Round, which was held on Wednesday, Feb. 6.

The top four in the first semi-final claimed their spot in Saturday night’s final round. That set the field for two Semi-Finals Rounds.

In the steer wrestling Matt Reeves from Cross Plains, Texas, had the fast time of the night. Reeves, a seven-time Wrangler National Finals Rodeo qualifier, earned $4,000. He won the title in the historic Will Rogers Memorial Coliseum in 2016 and showed livestock here as a youth. Reeves will be joined in the finals by world champions Hunter Cure from Holliday, Texas, and Ty Erickson from Helena, Mont., along with South Dakotan Jace Melvin.

Two members of the famed saddle bronc riding Wright family advanced, but the crowd cheered loudest for Erath County, Texas, native Sterling Crawley. Crawley rode Calgary Stampede’s Arriving Kamloops for 87 points and the semi-finals win. If he does that again Saturday night, he will have back-to-back titles at the Fort Worth Stock Show & Rodeo. Ryder Wright and his uncle Jesse Wright, from Milford, Utah, and Allen Boore from Axtell, Utah also advanced.

The reigning National High School Rodeo Association tie-down roping champion had the time to beat in the semis. Shad Mayfield of Clovis, New Mexico roped and tied his calf in 8.4 seconds and is on track to win his first Fort Worth title. Ryle Smith, the 2016 FWSSR champion tie-down roper from Oakdale, California, along with Cory Solomon of Prairie View, Texas, and Matt Shiozawa, from Chubbock, Idaho are moving on. Shiozawa won here in 2011.

The barrel racing offered slim margins as the four qualifiers were just over one-tenth of a second apart. Springer, Oklahoma’s Ivy Hurst, who won the Wildcard Round on Wednesday, stopped the clock in 16.47 seconds to win the semi-final. Right behind her was Montgomery, Texas resident Ashley Castleberry with a 16.48. The 2018 rookie of the year, Jimmie Smith, of McDade, Texas, had a 16.49. The final barrel racer to qualify was Ivy Conrado-Saebens from Hudson, Colorado, the 2016 champion here, with a 16.58.

Three bull riders made it to the eight second mark. At the top of the list was Ky Hamilton, from Mackay, Australia with an 89-point ride on Stock Yards Pro Rodeo’s Soy El Feugo. He earned $4,333. Brady Portenier, from Caldwell, Idaho finished second and Tanner Justin Willis, of Kearny, Arizona was third. The fourth contestant will not be determined until after Semi-Final B is completed.

Semi-Final B will showcase eight more contestants in each event competing on Friday night beginning at 7:30. Once again, the top four will advance to Saturday night’s Championship Finals.


Unofficial results from Semi-Final A of the FWSSR ProRodeo Tournament at the Fort Worth Stock Show & Rodeo, Thursday, February 6, 2020. The top four from this round advance to the finals on Saturday, February 8.