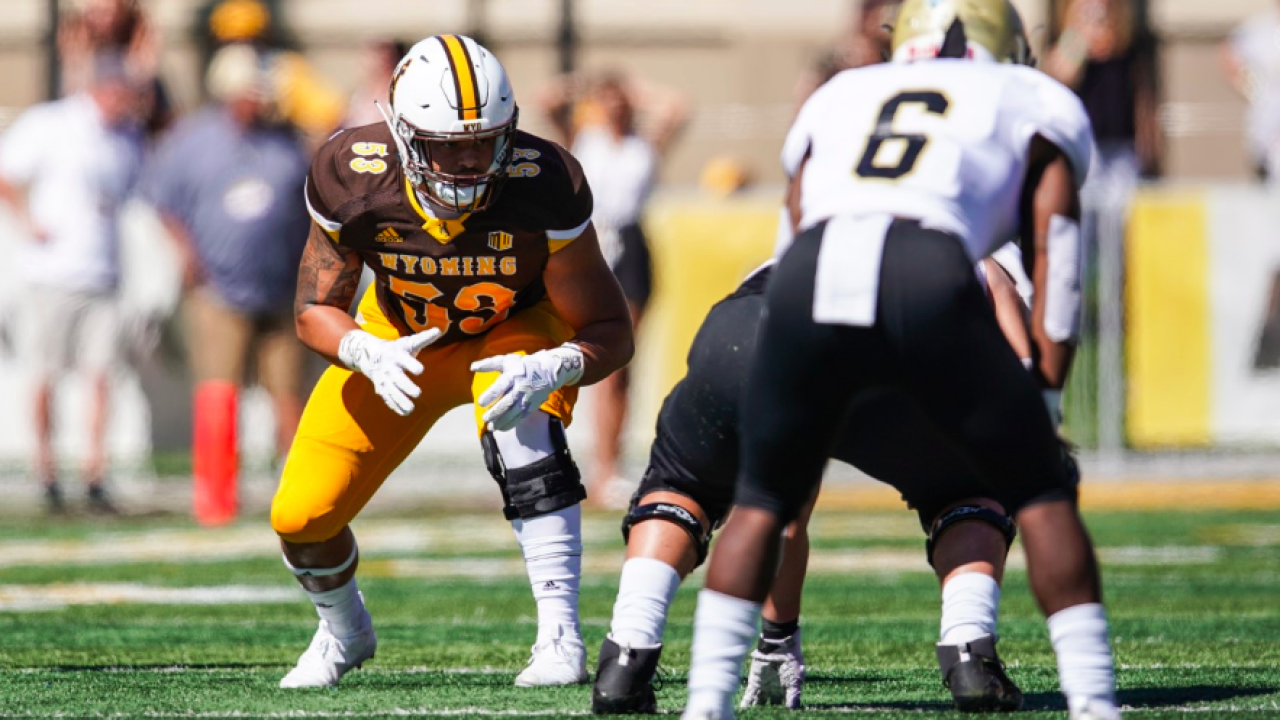 FAYETTEVILLE, Ark. – The Burlsworth Trophy Fountain has announced a record 83 players nominated from Division 1 (FBS) schools from across the country for its 2019 award, including Wyoming Cowboys' senior defensive end Josiah Hall.

The trophy, in its 10th year, is named in honor of Brandon Burlsworth, former University of Arkansas walk-on and All-American offensive lineman. It is awarded to the most outstanding football player in America who began his career as a walk-on and has shown outstanding performance on the field. Each nominee must have begun his first season of participation with FBS (D1) football program without financial aid of any kind from his university’s athletic department.

Burlsworth's life is also the subject of a major motion picture "GREATER" which was released in 2016.

Hall began his career at Wyoming in fall of 2015 as a walk-on. Since joining the Cowboy Football program Hall has gone on to: earn a scholarship, play in 41 career games, start 26 games, earn Academic All-Conference honors three times entering his senior season and be named a team captain his senior season. He was a starter on Wyoming’s 2016 team that hosted the Mountain West Championship Game and earn a berth in the San Diego County Credit Union Poinsettia Bowl. Hall also started on the 2017 Wyoming team that won the Famous Idaho Potato Bowl, and earned bowl eligibility for a third and fourth consecutive seasons in 2018 and ’19.

A year ago, former Wyoming Cowboy free safety Marcus Epps was one of three national finalists for the 2018 Burlsworth Trophy.

The 2018 winner was receiver Hunter Renfrow from Clemson University. After receiving no division one scholarship offers, Renfrow walked-on at Clemson, where he had 186 receptions for 2133 yards and 15 touchdowns, four of which were in national championship games. The 2017 winner was Luke Falk, a three-year starter for Washington State, where he broke the PAC-12 record for career passing yards during his senior season. The 2015 and 2016 winner was Heisman Trophy Winner Baker Mayfield who was the first pick in the 2018 NFL draft.

“This award is about the journey, the incredibly challenging journey that all of these nominees have taken,” said Marty Burlsworth, CEO and founder of the Brandon Burlsworth Foundation and older brother of Brandon. “When you begin your college career as a Walk-On there are plenty of skeptics, those that think you can’t do it. This group of Burlsworth Trophy nominees have proven all the skeptics wrong. They have put in an immense about of work and overcame numerous obstacles to make their dreams come true.”

Without one D1 scholarship offer, Brandon Burlsworth walked on at the University of Arkansas in 1994. He became a three-year starter and was eventually named an All-American in 1998. Burlsworth was selected as the 63rd overall pick by the Indianapolis Colts in the 1999 NFL draft, but was tragically killed in a car accident 11 days later. The Burlsworth Foundation was created in his memory and supports the physical and spiritual needs of children, in particular those children who have limited opportunities.

The Brandon Burlsworth Foundation, in conjunction with Springdale Rotary Club, will host an awards ceremony on December 9, 2019 in Springdale, AR to honor the three finalists and to announce the 2019 winner.