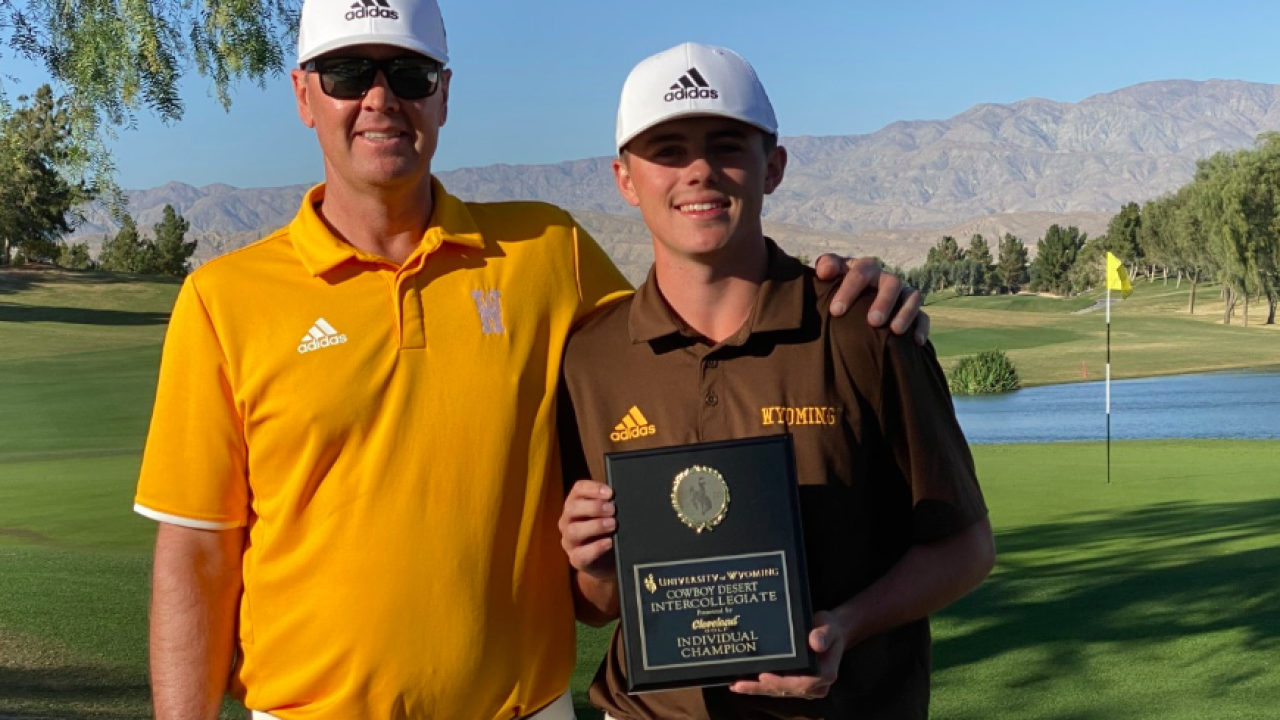 PALM DESERT, Cali. -- Cowboy sophomore Tyler Severin shot the best round of the day on Sunday in the final round of the Wyoming Desert Intercollegiate to come from three strokes out of the lead entering the day to capture a two-stroke victory. Severin’s final round 66 (-6) improved his 54-hole total to 207 (-9), giving the Longmont, Colo., native the first collegiate victory of his career. Severin becomes only the second Wyoming Cowboy in history to capture the Wyoming Desert Intercollegiate. The first Poke to capture the title was Gabe Maier back in 2009 when he shot a 208 (-8).

Severin began Sunday’s final round tied for ninth at 141 (-3) and was three strokes back of the tournament leader Tom Gueant of Oregon, who had sole possession of first place at 138 (-6). But Severin showed right from the beginning of the final round that he was out to win his first collegiate tournament. After recording pars on the first three holes on Sunday, Severin would birdie Holes 4, 5, 6 and 8 on the front nine. His birdie on Hole 6 came on a chip-in from off the green. On the back nine, Severin would also birdie Hole 10 and close out his round with a birdie on the 18th. In addition to his six birdies, he made par on the other 12 holes in the final round. Graysen Huff of Auburn finished second at 209 (-7). Gueant of Oregon, Mats Ege of Cal State Northridge and Brandon Mancheno of Auburn tied for third at 210 (-6).

“It was a pretty good feeling heading into the final round (just three strokes back), said Severin. “It’s been awhile since I’ve had that feeling and have had an opportunity to get a win. I played well over the summer, but in college events it really hasn’t been there. It was a cool feeling to have that confidence, knowing if I played well today I had a chance to win.”

Asked how he was able to maintain his composure once he took the lead, Severin said, “I was making good birdies, and then I chipped in on number six. That is when I said to myself, ‘I got a shot at winning this.’ Then I birdied eight and 10. I just focused on staying within my process on each hole. I made a good par on 11 to keep me in the hunt, and then I just tried to not let the nerves get the best of me. When it came down to 18, I was feeling really comfortable and was able to birdie 18 to end my round.”

Severin played amazingly consistent in all three rounds, which he attributed to a number of factors. “I got comfortable on this course this week,” said Severin. “Knowing this course pretty well after playing it last year, I knew where to and where not to hit the ball. I also had a lot of wedges on my approach shots, and I was feeling pretty comfortable with my wedges, so I attribute it to those factors. Just posting good numbers, minimizing mistakes and making very few mental mistakes.

“I can’t describe this feeling (winning his first college tournament). It feels unbelievable.”

Asked what kind of confidence this gives him heading into the rest of the spring season, Severin said,”I think it does give me good confidence, knowing I can win and did win. Also it gives me confidence that I can post better scores and help my guys out as we continue our spring season, try to win some tournaments as a team and get in good position for conference. I couldn’t have gotten here without my boys on this team. They were awesome.”

The other Cowboy who finished strong on Sunday was senior Dan Starzinski, who moved up nine spots from 30th to 21st in the final round. Starzinski shot his best round of the tournament, a 70 (-2), on Sunday to improve his 54-hole total to 215 (-1).

As a team, Wyoming retained its 12th-place position, concluding with a three-day total of 876 (+12). The Cowboys final round of 284 (-4) was their best round of the tournament by 10 strokes, and it was the fourth best round on Sunday out of the 21 teams competing in the 2020 Wyoming Desert Intercollegiate.

Auburn recorded a dominating team victory, posting an 842 (-22) team score to win by 18 strokes over second place Charlotte 860 (-4). The Tigers entered the tournament ranked No. 19 in the nation. Charlotte was ranked No. 50 coming into the Desert Intercollegiate.

“I told the guys, including Tyler (Severin), heading into the final round to focus on contributing to the team and playing their best,” said Joe Jensen, UW Director of Golf. “I give Tyler a lot of credit. He showed a lot of maturity today, and he went out there and made a lot of birdies and didn’t make mistakes. I’m really proud of him.

“I was proud of all the guys today. They went out and played hard. This has been a long week, playing in two tournaments back-to-back. We had some ebbs and flows, but today’s final round was a great way to end the week. I challenged them to have a solid round today, and they ended up posting one of the best rounds of the day. This has been a great trip to start the spring. These first two tournaments showed the balance we have on this team -- sometimes its Tyler, sometimes its Dan (Starzinski) and in the fall it was Kirby (Coe-Kirkham) who led us. I like the balance on this team.”

The 2020 Wyoming Desert Intercollegiate was hosted by the University of Wyoming at the Classic Club in Palm Desert Calif. The Classic Club measured 7,305 yards and played to a par of 72.