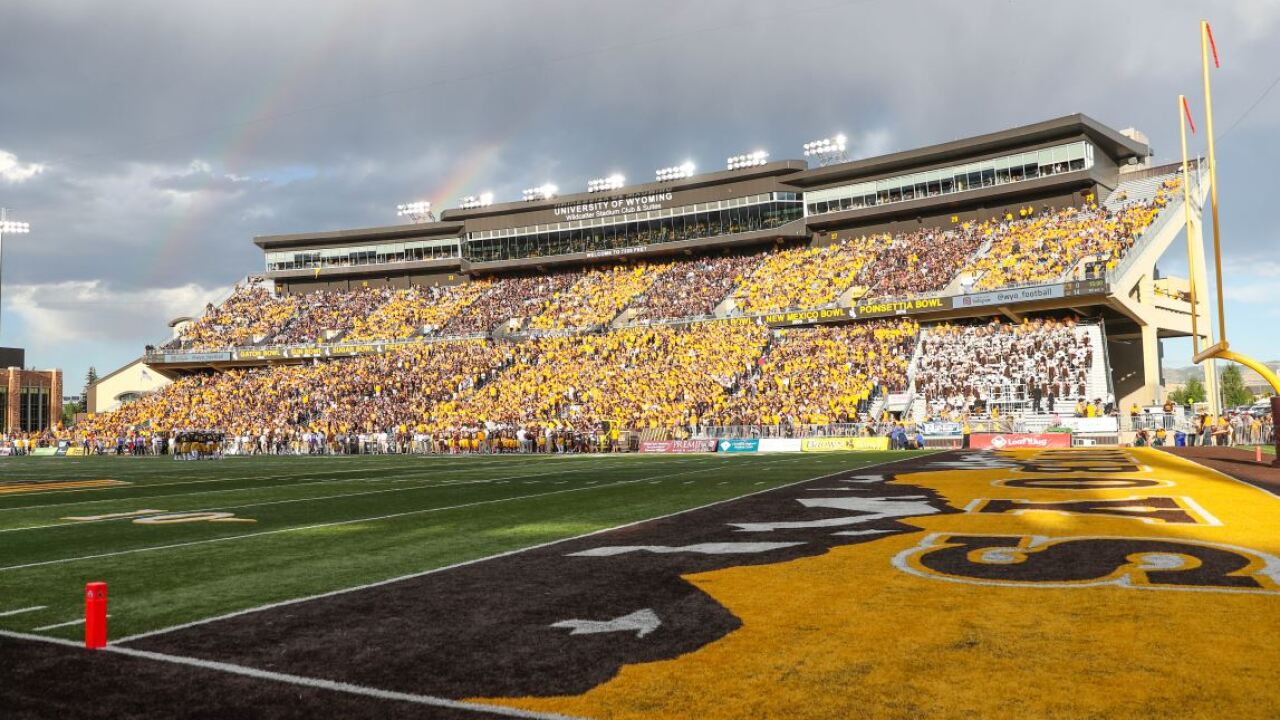 LARAMIE, Wyo. - The 2020 University of Wyoming Football schedule will feature one of the best home schedules in history, with all six home games featuring opponents that played in the postseason last year.

Those six home games include the return of long-time rival Utah and perennial Mountain West contenders Air Force, Boise State, San Diego State and Utah State. Weber State, one of the top teams in the nation at the Football Championship Subdivision (FCS) level, rounds out the home schedule. Weber State advanced to the National Semifinals of the 2019 FCS Playoffs.

The Wyoming Cowboys are coming off an 8-5 season and a postseason win in last year’s NOVA Home Loans Arizona Bowl. Wyoming was a perfect 6-0 in home games last season. Attendance at Wyoming home games in 2019 was the second largest home attendance in school history for a six-game home schedule.

Game dates are tentative and subject to change

+The Mountain West Football Championship Game will be played at the home stadium of one of the divisional champions based on the current MW policy in place to determine the host team.

∙Season tickets are currently on sale for the 2020 Wyoming Football season. Season-ticket packages start at $159 for adults and $89 for children ages 3-12 years old.

∙More details on season-ticket sales are available online at www.GoWyo.com/tickets. Fans may also email tickets@uwyo.edu, call (307) 766-7220 or stop by the Athletics Ticket Office on the west side of the Arena-Auditorium.

Highlights of the 2020 Wyoming Football Schedule

∙The return of the Utah Utes to Wyoming’s War Memorial Stadium will be the first game between the two teams since the 2010 season, which was the last year Utah was a member of the Mountain West Conference before moving to the Pac-12.

∙Utah won the Pac-12 South Division last season, and played in the Pac-12 Championship Game and the Valero Alamo Bowl.

∙Wyoming’s series with Utah is the second longest for the Cowboys. The two teams will be playing for the 84th time. Only Wyoming’s 112-game series versus Colorado State is longer. Wyoming will play a return game at Utah in 2025.

Wyoming Home Schedule Features a Premier Non-Conference Game for the Fourth Consecutive Season, Pac-12 Team Will Visit Laramie for the Third Time in Past Four Seasons

∙Wyoming Athletics’ commitment to bringing high quality opponents to War Memorial Stadium continues this season with the Utah Utes from the Pac-12 Conference returning to Laramie for the first time in 10 seasons.

∙A year ago in 2019, the Missouri Tigers from the SEC made their first appearance in Wyoming and the Cowboys captured a 37-31 victory over the Tigers.

∙The Utah and Missouri games follow appearances by Pac-12 members Oregon and Washington State, which appeared in War Memorial Stadium in 2017 and 2018, respectively.

∙Wyoming will open the 2020 season on Saturday, Sept. 5 at home versus the Weber State Wildcats.

∙Weber State was the No. 3 seed in last year’s FCS Playoffs. The Wildcats advanced to the National Semifinals before losing to James Madison. Weber State ended the season with an impressive 11-4 record.

∙The other September game will be versus the Utah Utes on Sept. 9.

∙The last visits by the Aztecs came in 2016 when they traveled to Laramie for a regular-season meeting that the Cowboys won by one point, 34-33. Two weeks later, the Pokes hosted the Aztecs in the 2016 Mountain West Championship Game. In another down-to-the-wire finish, SDSU won by three points, 27-24.

∙Who could forget the furious come-from-behind win by the Cowboys over Air Force in the Falcons’ last visit to Laramie in 2018. In one of the great comebacks in Wyoming history, the Cowboys scored three touchdowns in the final five minutes of the game to erase a 27-14 deficit and turn it into a 35-27 home victory on senior night.

November Will Bring Games vs. Utah State and Boise State to Laramie

∙Three of the perennial contenders for the Mountain West Conference will be facing each other in Laramie in November when Wyoming hosts Utah State on Nov. 7 and Boise State on Nov. 21 to wrap up the home schedule.

∙The 2020 road schedule for the Pokes, will see them travel to Louisiana on Sept. 12. The Ragin’ Cajuns posted an 11-3 record in 2019, winning the Sun Belt Conference West Division and advancing to the LendingTree Bowl. On Sept. 26, Wyoming will travel to Muncie, Ind., to play the Ball State Cardinals in the final non-conference game of the season. That game will be followed by Wyoming’s one bye week of he season on Oct. 3.

∙The Mountain West road schedule for the Pokes will include a trip to UNLV on Oct. 10 to open conference play. Wyoming will play Colorado State in the 112th edition of the Border War on Halloween in Fort Collins. UW will make a second trip to the state of Nevada on Nov. 14 when they play the Nevada Wolf Pack in Reno. The regular-season will come to an end on Nov. 28 in Albuquerque against the New Mexico Lobos.

∙The Wyoming Cowboys are coming off their fourth consecutive season in which they earned bowl eligibility.

∙The Cowboy offense returns three outstanding running backs in First Team All-Mountain West selection and junior Xazavian Valladay, graduate transfer Trey Smith and sophomore Titus Swen, who all recorded 100-yard rushing games in 2019. Valladay rushed for 1,265 yards as a sophomore. Smith was granted a medical hardship and an additional year of eligibility by the NCAA to return to the Cowboys in 2020.

∙On defense, five regular starters return and 12 players with at least one game of starting experience return from a Cowboy defense that ranked No. 11 in the nation in scoring defense, allowing opponents only 17.8 points per game. That defensive unit will be led by the likes of senior defensive end Garrett Crall, junior nickel back Keyon Blankenbaker, cornerbacks Azizi Hearn and C.J. Coldon, and sophomore safety Rome Weber. Five other defensive linemen with starting experience also return. Another key returnee will be redshirt junior defensive tackle Ravontae Holt, who missed the entire 2019 season due to injury.