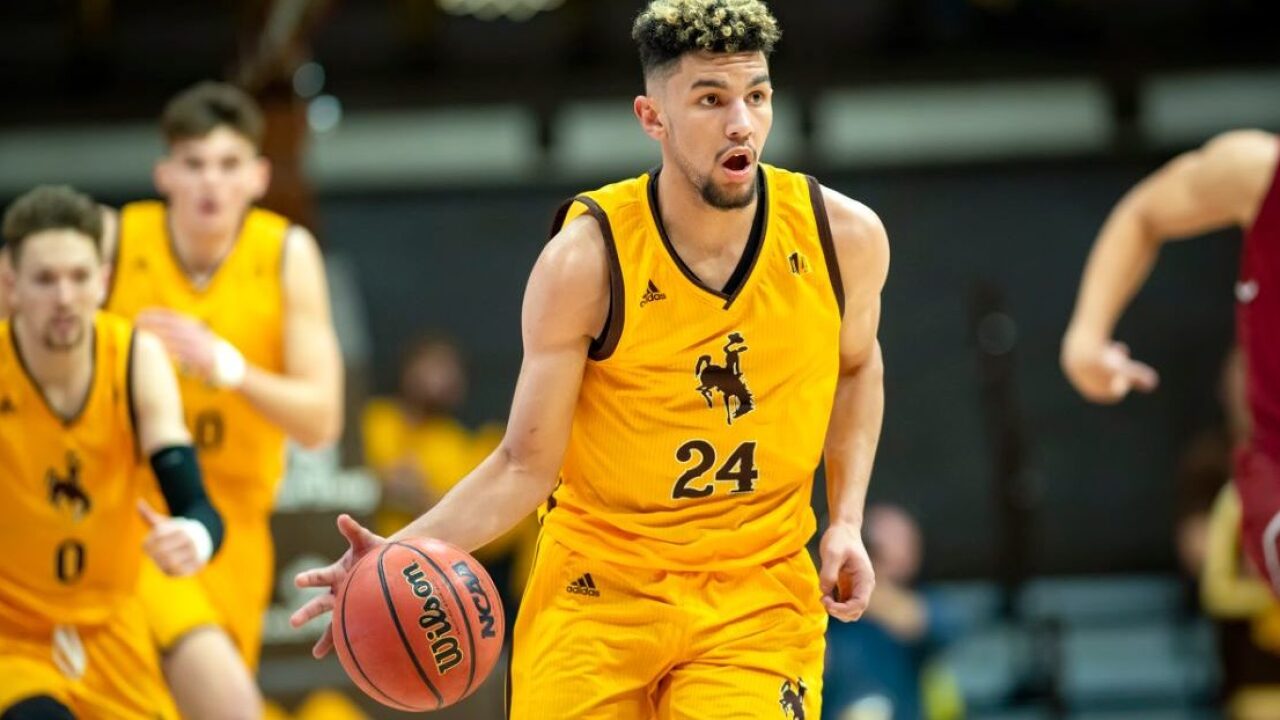 LARAMIE, Wyo. - The Wyoming Cowboys' late rally fell short in a 73-68 loss to Nevada in the final home contest of the season on Tuesday evening in the Arena-Auditorium in Laramie. Senior Jake Hendricks tied a career-high with 27 points and tied a career best with seven threes for the game on senior night.

“I told the guys that I loved their effort, but we came up short in the second half in some areas that we talked about at halftime,” UW head coach Allen Edwards said. “Guarding the three-point line was a big emphasis for us tonight defensively. Nevada only had two threes in the first half, but they got six in the second half. And as always, because we are smaller, we have to work hard at limiting offensive rebounds by our opponent,, I thought the eight offensive rebounds Nevada got in the second half really affected us in the sense of put-back layups by them or rebound kick-outs for threes really hurt.”

Hendricks’ seven threes was tied for the fourth most in single game school history along with Arena-Auditorium history. He also finished his final game at home tied for 10th with Alexander Aka Gorski and Fennis Dembo in career three pointers with 143. Fellow senior A.J. Banks added four assists on the night for the Pokes, tying for the game high.

“It was great to see Jake (Hendricks) hit some threes on senior night because he’s been struggling for a while,” Edwards said. “But when you’re able to do that offensively and then be able to guard the way he was guarding Jazz Johnson really showed a lot of heart by Jake. Jazz is a guys who gets up eight to nine three-point shots a game, and Jake did a great job of limiting him to only four attempts and only one make. I thought Jake did a great job chasing Jazz around, and he also had enough energy on the offensive end of the floor to give us 27 points.”

Redshirt sophomore Hunter Maldonado reached double-figures for the 26th time this season, as he added 14 points to go along with five rebounds and four assists. Sophomore T.J. Taylor added 11 points and a team-high seven rebounds for his eighth game in double-figures this season.

Wyoming hit 11 threes for the night for the first double-digit three point evening since hit 10 against Fresno State on Jan. 18. The Wolf Pack shot 45 percent from the field for the evening and held the Pokes 39 percent. The Wolf Pack added 34 points in the paint holding the Pokes to only 14 for the game.

The Wolf Pack jumped out to an early 8-2 advantage in the opening five minutes of the contest. The Pokes opened 1-of-7 from the field during that stretch. Maldonado and Hendricks would add five points to make it an 8-7 contest with 13:17 remaining in the half.

After the Pokes held the Wolf Pack scoreless for nearly four minutes, Nevada’s Jazz Johnson helped the Wolf Pack go on a 7-0 run to take a 15-7 advantage with under 10 minutes remaining in the opening 20 minutes. Johnson would then lead a 6-0 run to make it a 21-10 game at the 6:26 mark.

Wyoming responded with an 8-0 to make it a 21-19 game with 4:54 left, as Jake Hendricks added six points to fuel the Cowboy run. But Nevada added a 7-0 run themselves to push the lead to 28-19 just over a minute after Wyoming’s streak.

The Pokes would hold the Wolf Pack scoreless in the final 3:34 of the half to make it a 28-24 game in favor of Nevada at the half. Wyoming knocked down five threes in the first half, we were out shot by the Wolf Pack 43 percent to 32 percent in the opening 20 minutes.

Nevada opened the second half hitting their first three shots to take a 35-26 lead on the Pokes in the opening ninety seconds. Both offenses would then heat up with Hendricks scoring nine points, but the Wolf Pack answered with a trio of three pointers and owned a 49-42 lead with just over 14 minutes remaining in the game.

Nevada’s Jalen Harris the leading scorer added five-straight points with a put back dunk and a triple to make it a 59-47 game halfway through the second period. Maldonado added five-straight points with a dunk and triple to cut it to 59-52 with 9:20 left in the game, as he got to double-figures for the 26th game this season. He would add another triple at the 7:46 mark to make it a 59-55 contest.

Hendricks hit his seventh three of the game and Kwane Marble added a pair of freebies to make it a one-point deficit at 63-62 with 4:21 left in the game. The two teams would then battle with the Wolf Pack carrying a lead no larger than three until Robby Robinson hit a layup for a 71-66 game with 1:31 left.

Taylor would add a pair of freebies to make it a three-point game with 33 seconds left. Wyoming would record a steal and Maldonado’s shot from three was short as the Wolf Pack took the game after a pair of free throws, 73-68.

The Wolf Pack were led by Harris with 23 points. He also added seven rebounds for the night. Johnson added 13 points and Robinson led the team with eight rebounds.

Wyoming wraps up the regular season on Saturday heading to Fresno State for a contest with the Bulldogs set for a 5 p.m. MT start on the Mountain West Network.