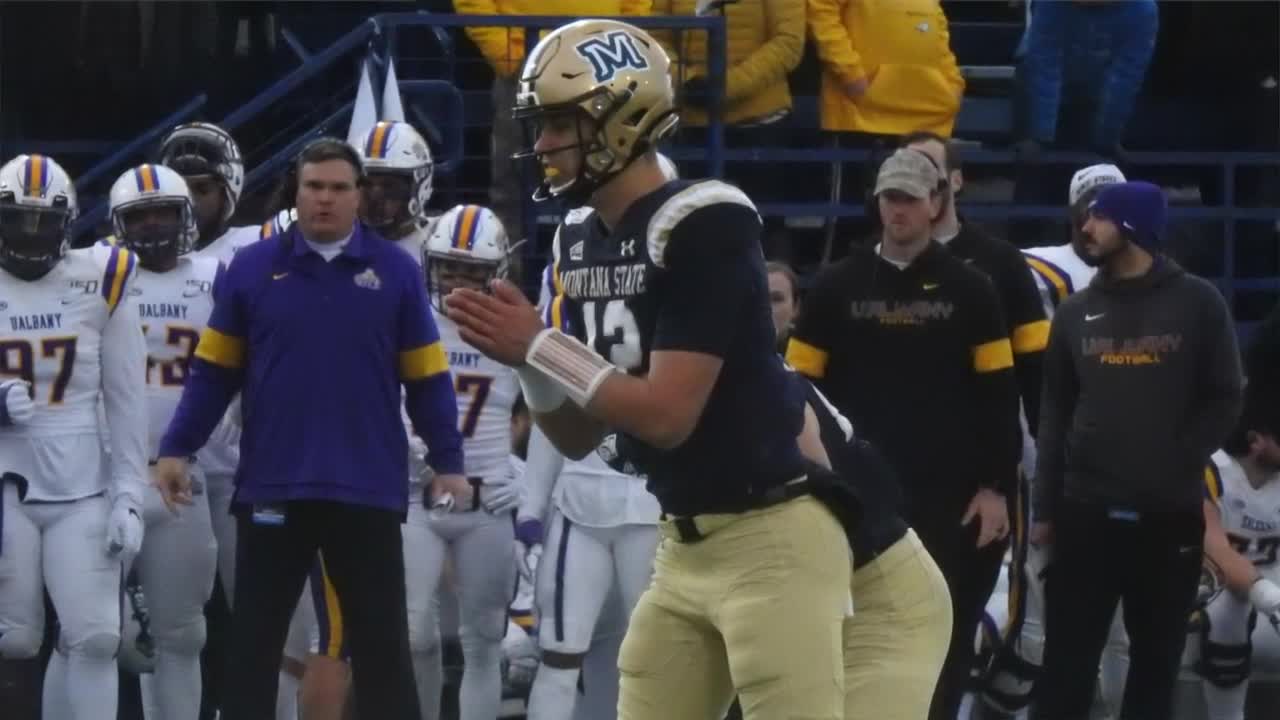 BOZEMAN — The fifth-ranked Montana State Bobcats hosted the University of Albany Great Danes in the second round of the FCS playoffs at Bobcat Stadium Saturday afternoon.

The Great Danes struck first on the opening drive of the game when redshirt freshman quarterback Jeff Undercuffler found his favorite wideout, Juwan Green, on a 58-yard touchdown pass to open up an early 7-0 lead. Undercuffler threw for 273 yards, two touchdowns and two interceptions on the day.

But from there the Bobcats would score 26 unanswered points to close out the half and roll to a 47-21 win.

Montana State didn't let off the gas pedal to start the third quarter. Rovig would throw two touchdown passes to receiver Lance McCutcheon (91 yards, two touchdowns). Then in the fourth quarter Logan Jones (19 yards rushing, one touchdown) would punch one in to make it a 47-7 Bobcats lead in the fourth.

The Great Danes would add two fourth-quarter touchdowns to gain a little pride back, but Montana State cruised to a 47-21 win.

Bobcat punt returner Coy Steel had a great game, returning four punts for 105 yards and head coach Jeff Choate made note of how Steel and the rest of the special teams unit made a difference in today's contest.

“Coy is a fearless guy, and oftentimes at the FCS level a lot of punters will kick high, short balls -- they don't give you a lot of return opportunities, and when you look at things statistically that happens a lot. One thing that happens to an East Coast team, or any team that’s coming from near sea-level to altitude, the ball is going to carry farther," said Choate. "Their punter was kicking well beyond their normal average and at times over-kicked his coverage and created seams. But Coy is a fearless guy, he’s got the right mentality for a punt returner for sure.”

Rovig had one of the best games of his young MSU career Saturday, completing 24 of 30 passes for 279 yards and three touchdowns. Choate and Rovig both talked about the redshirt sophomore's performance and what has changed over the course of the past couple games that has resulted in an offensive surge for the Bobcats.

“I think we gave him opportunities and he took advantage of them. This is the guy we see every day at practice. Our coaching staff and entire team has a tremendous amount of confidence in Tucker," Choate said. "We knew we were going to need him, and when you play one of the best 16 teams in the country you’re going to need your best. And Tucker had his best today and I’m hoping there’s a little more left in the tank."

“I’d say giving receivers more of a chance when it comes to fades or posts, whatever it may be," said Rovig. "And taking every single play and just focusing on that play alone, and when the next play come just focus on that next play."

On the defensive side of the ball cornerback Damien Washington racked up two interceptions.

"He's been owing me those interceptions for about four years now, so it's about time I got paid back, but I thought our secondary did a great job disguising," Choate said.

All joking aside, seeing the program reach this point is something Washington was especially proud of reflecting after the game.

"I think it's really great for this team because four years ago we were like 4-6. We weren't that good of a football team. And now we're trying to set the standard of every year, playoff football," said Washington. "That's the new standard for Bobcat football, and we owe it to the fans."