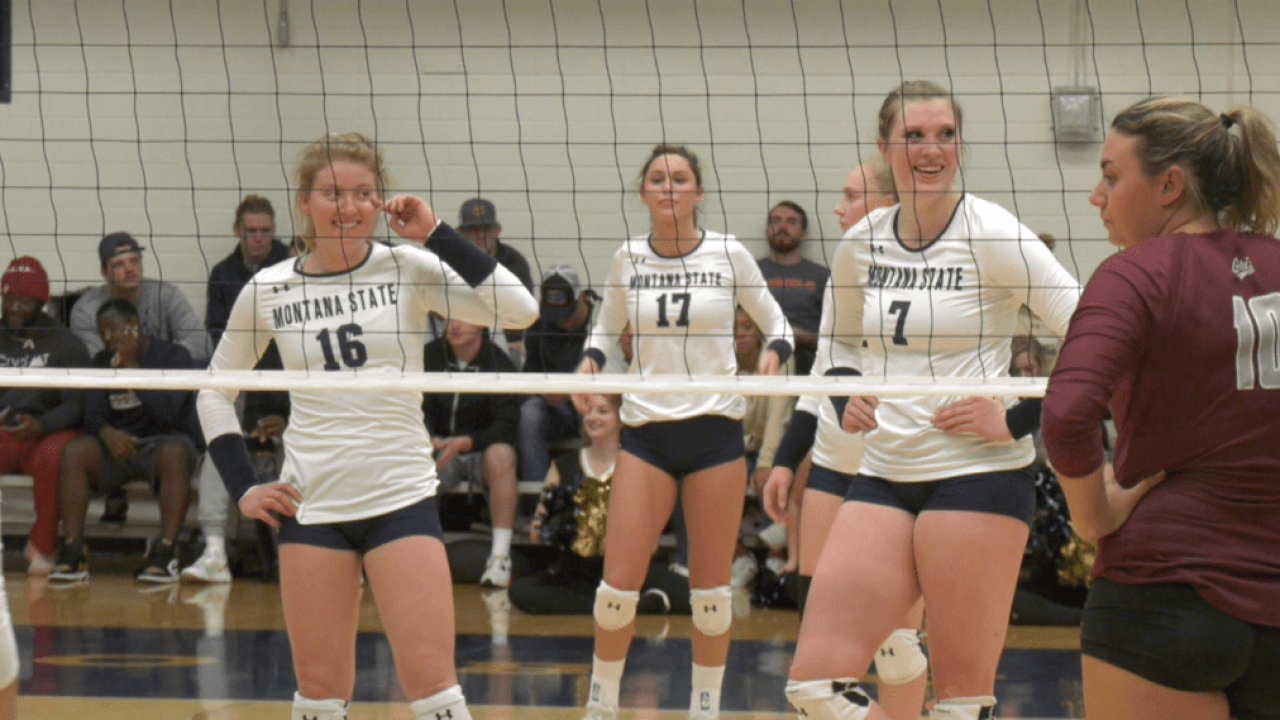 Hannah Scott (16), Evi Wilson (17) and Kelsi White (7) await the second set to begin during their match against the University of Montana. (Nick Petraccione/MTN Sports)

BOZEMAN – Evi Wilson spent the last four years building a legacy as a member of the Montana State volleyball team. The Vancouver, Wash., product, who will receive her undergraduate degree in business finance in two weeks, will use her pioneer spirit as she becomes the first Bobcat graduate transfer to continue her career as a member of the Boise State beach volleyball squad.

“This is an exciting moment not only for Evi, but also for the MSU volleyball program,” said MSU head coach Daniel Jones. “Evi built an impressive legacy here, and she has just added to that by becoming the first graduate transfer from our program to join a beach volleyball program.

“There is great significance in this, as it shows that anyone can come here and play with our indoor program, work hard, gain their undergraduate degree, while developing their skills then continue to progress both in their education and love for the game of volleyball after their time at MSU,” he added.

Wilson garnered First-Team All-Big Sky Conference accolades as a senior guiding the Bobcats to its best season in recent memory. Montana State finished the fall season with 15 victories, its highest total since 2012. MSU's ten Big Sky Conference wins were its most since the 2004 campaign. In addition, Montana State made its second straight Big Sky tournament appearance and won its first postseason match for the first time since 2005 with a win over Sacramento State.

Wilson, an outside hitter, played in 107 of 112 sets and led Montana State with 371 kills, averaging 3.47 per set, which ranked among the top five in the Big Sky. She closed out her career with an impressive effort at the Big Sky tournament, recording 31 kills (3.88 kps), while hitting .371 from the field and adding 29 digs. Wilson was named to the All-Big Sky Conference Tournament team, a first for the Bobcats since 2005. Off the court, Wilson was an All-Big Sky Academic selection.

“I am extremely grateful for my experience at Montana State, and all that it has brought me- lifelong friends, a second home, and a sense of direction in my life,” Wilson said. “Montana State provided me the opportunity to continue playing volleyball, while preparing me for this next chapter. I can’t thank everyone who has been part of my journey in Bozeman, enough. The support I have received here is unmatched. I’ll always know where my roots lie- Go Cats always.”

Wilson will pursue a master’s degree in business administration or leadership.

“My hope is that Evi is the first of many to follow this path,” Jones stated. “I am committed to seeing our athletes get the best opportunities in all aspects of life, and this extends beyond graduation. Evi is going to big things in this world, and getting a graduate degree is just another step in the right direction for her.”