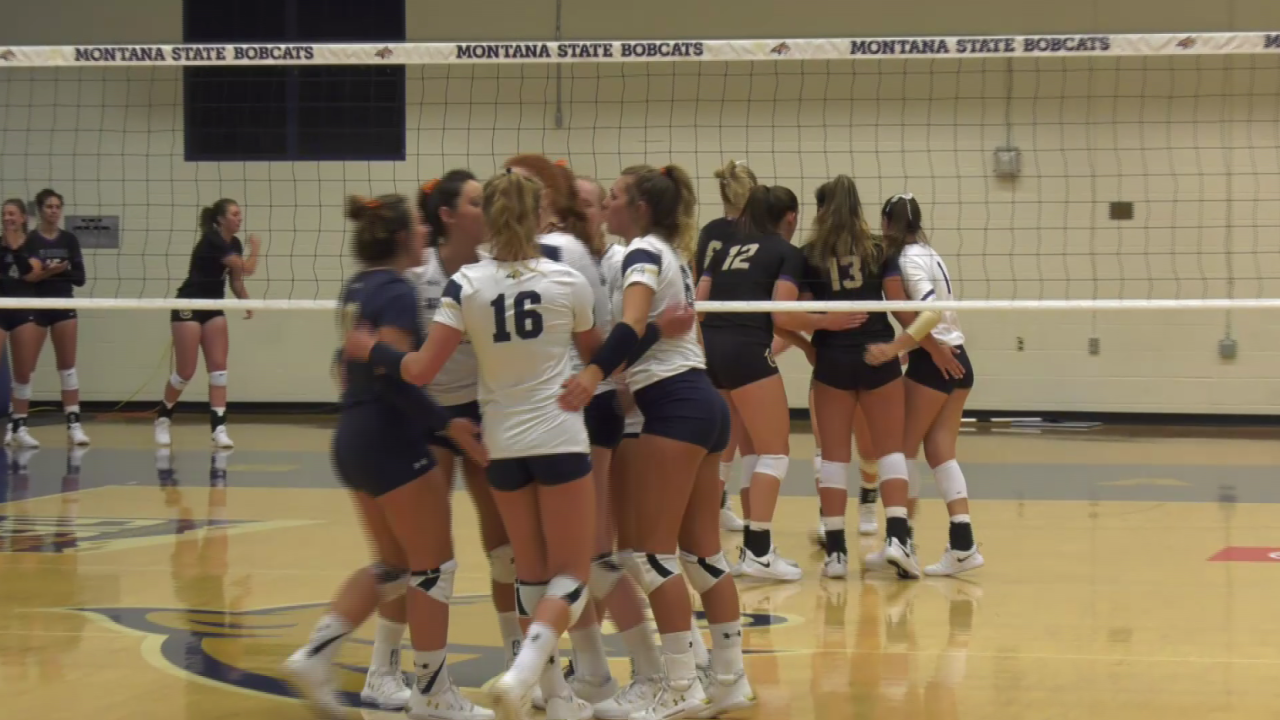 The Montana State Bobcats celebrate a point during their scrimmage against Carroll College. (Nick Petraccione/MTN Sports)

SACRAMENTO, Calif. – In a match that featured 48 ties and 18 lead changes, the Montana State volleyball team went toe-to-toe with top-seeded Northern Colorado before suffering a 29-27, 25-22, 22-25, 25-22 setback to the Bears on Friday night in semifinal action of the Big Sky Conference Tournament.

The opening frame set the tone for the entire match as both Montana State (15-14) and Northern Colorado (25-7) fought off a pair of set points. But in the end, UNC's Taylor Muff gave the Bears the lift it needed to take a 1-0 advantage.

MSU held a late 22-21 margin in the second set following a block by Kelsie White and Hannah Scott, but the Bears reeled off a 4-0 run to close out the set.

The third set saw 15 ties before the Bobcats broke away from 21-20 with a 3-1 run to hold set point following a Scott kill. MSU took the game on an Emma Pence kill.

UNC looked poised to roll the Cats in the fourth set taking an early 10-5 advantage. But, behind the serving of senior Sydney Mathison MSU chipped away at the margin, eventually taking a 13-12 lead. The set was tied four times in the waning moments before the Bobcats used a Mathison ace, followed by a Kira Thomsen kill and block to go up 21-18. The Bears used its last surge to rattle off a 6-1 run to put the match away.

"We definitely gave them everything they could handle, and I think we were the best equipped team to take on Northern Colorado," said MSU head coach Daniel Jones. "I'm so proud of the fight and determination and resilience of the group tonight.

"In the three sets we lost we had late leads in all of them," Jones commented. "But, UNC has that upper-hand right now going through conference at 17-1 and they have that air of confidence about them that they can find their way out of any kind of hole, and they've done that on several occasions, including at our house a couple of weeks ago. They have the athletes and the fight to do it and they're hard to stop."

Montana State was led by senior Evi Wilson who recorded a match-high 20 kills to go along with 17 digs. Thomsen was also in double-figure kills with 12. She also added eight digs and five blocks.

Asides from Wilson's dig total, Allyssa Rizzo notched double-digits with 12 saves. Rizzo finished her career with 2,120 digs, which smashed the old Bobcat mark by 400. She also broke her own school record for digs in a single-season with 652.

Wilson completed a solid senior season with 371 total kills, averaging 3.47 kps which ranked in the top five of the Big Sky Conference.

"Our seniors can say the left it better than they found it," Jones said. "We have some really big shoes to fill. Rizzo is an all-time great; Evi had a single-season that is comparable to any in recent memory; and Sydney was such an incredible leader.

"We'll have a hard time replacing them," Jones stated. "It will be a challenge, but we have a lot of talent coming back. The leadership and toughness thing are what we need to figure out and where that's going to come from."

Montana State wrapped the season with 15 victories, its most since 2012. MSU's 10-win Big Sky Conference season was its best since 2004.