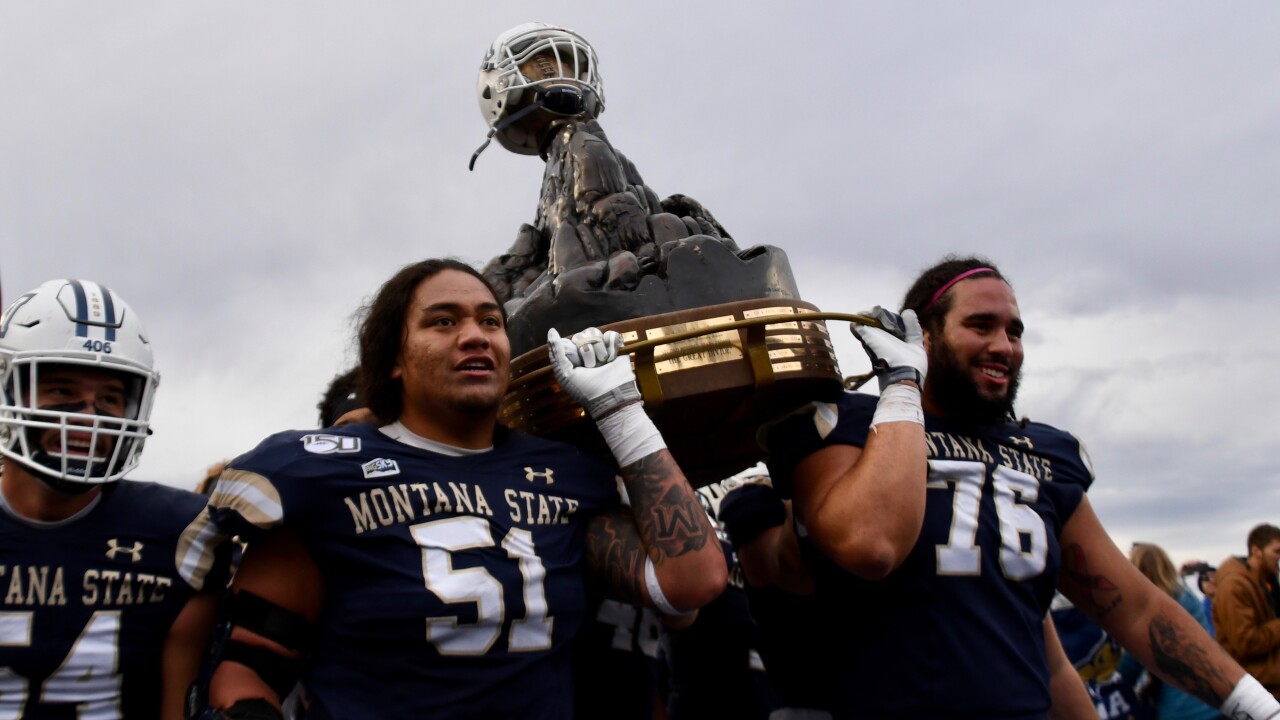 BOZEMAN – Montana State University officially took control of the all-time Brawl of the Wild Series, presented by Town Pump, over the University of Montana following the 2019-20 athletic season.

The head-to-head matchup between the two athletic departments was slated to close with the Big Sky Outdoor Track and Field Championships which were originally scheduled to end on May 16. The Bobcats clinched the Series win at the start of March before the remainder of the spring sports schedule was canceled.

The Cat-Griz rivalry series started out with a split in volleyball. The Bobcat volleyball team earned a 3-0 sweep (25-21, 25-13, 25-18) over the Griz in Missoula on Sept. 24. MSU totaled a .362 hitting percentage over Montana's .182 mark to stake claim to the opening point. Montana came back to tie things up in the Brawl of the Wild Series with a four-set victory (25-21, 10-25, 25-20, 25-18) in Bozeman on Oct. 29. Despite tying things up in the second set, MSU was unable to keep momentum as the Griz took control of the remainder of the match midway through the third frame.

MSU's cross country teams gave the Bobcats a 3-1 advantage in the standings at the Big Sky Conference Championships on Nov. 2. MSU wouldn't give the lead up again.

A trio of Bobcats earned all-conference honors for the men's team and helped lead the squad to a third-place showing. It was the highest finish for MSU at the Big Sky meet since 2012 while Montana took 11th overall. Camila Noe won the Big Sky women's individual title to pace the Bobcats to a fifth-place effort. The MSU women scored 116 points, finishing a spot ahead of Montana which scored 137 points.

The Bobcats went up 5-1 in the head-to-head competition after MSU defeated Montana, 48-14, in the 119th football matchup between the two schools on Nov. 23. Montana State held on to the Great Divide Trophy for the fourth consecutive year while scoring the most points by a Bobcat team against the Griz in program history.

The margin remained the same following the Cat-Griz basketball doubleheaders held in Missoula and Bozeman.

MSU's women's team rallied from 14 points down in the second half of its Feb. 1 matchup in Dahlberg Arena to force overtime. Fallyn Freije eventually scored 10 of the Bobcats' 15 points during the final five minutes of play to help lead MSU to a win. In their next meeting on Feb. 22 in Worthington Arena, MSU built a double-digit lead to open the second quarter and were never threatened in sweeping the season series. The Bobcats' 92-78 victory was their fifth straight over the Lady Griz and helped seal a Big Sky regular season title.

The Bobcat men's team dropped both matchups against the Griz. Despite a 37-point outburst from senior guard Harald Frey, MSU was unable to claw out of an early deficit in the 300th meeting between the two programs in Missoula on Feb. 1. Montana shot 10 of 14 (63%) from 3-point range in the first half and never looked back. Montana held a lead for the majority of the second matchup on Feb. 22 and left Bozeman with a 59-54 victory. Both teams struggled offensively, but the Griz held the advantage from the floor by outshooting MSU 48-35%.

Another split in the Series came on Feb. 29 at the Big Sky Conference Indoor Track and Field Championships. MSU's men's team totaled 77 points for a third-place finish while the Griz men's squad finished in fifth with 60 points. The Montana women narrowly topped MSU as the Griz scored 55 points to take sixth and the Bobcats tied for seventh with 53 points.

The Montana State women's tennis team clinched the Brawl of the Wild trophy by defeating Montana 4-3 in a hard-fought dual in Missoula on March 8. The Bobcats opened the matched by winning a crucial doubles point. Montana won the first two singles matches before Linnea Fristam won her No. 2 singles contest in straight sets to tie the score at 2-2. After the Griz took a 3-2 lead, MSU's No. 5 and No. 6 singles players earned victories. JJ Chen and Enni Zander each won their respective matches in straight sets to give the Bobcats a victory.

MSU held a 9-4 edge with four points available in the Brawl of the Wild Series when the Big Sky Conference announced it had canceled the remainder of the season's spring competition and championships.

The 2019-20 athletic year served as the seventh season of the Brawl of the Wild Series between Montana and Montana State. The Griz won the Brawl of the Wild Series in its first year of existence in 2013-14 by a 14-3 score. Montana held on to the trophy for three years before the Bobcats earned the Series victory for the first time in 2016-17. Montana State holds a 4-3 edge in the Series after winning by consecutive year-end scores of 10-7, 12-5, 11-6 and 9-4.