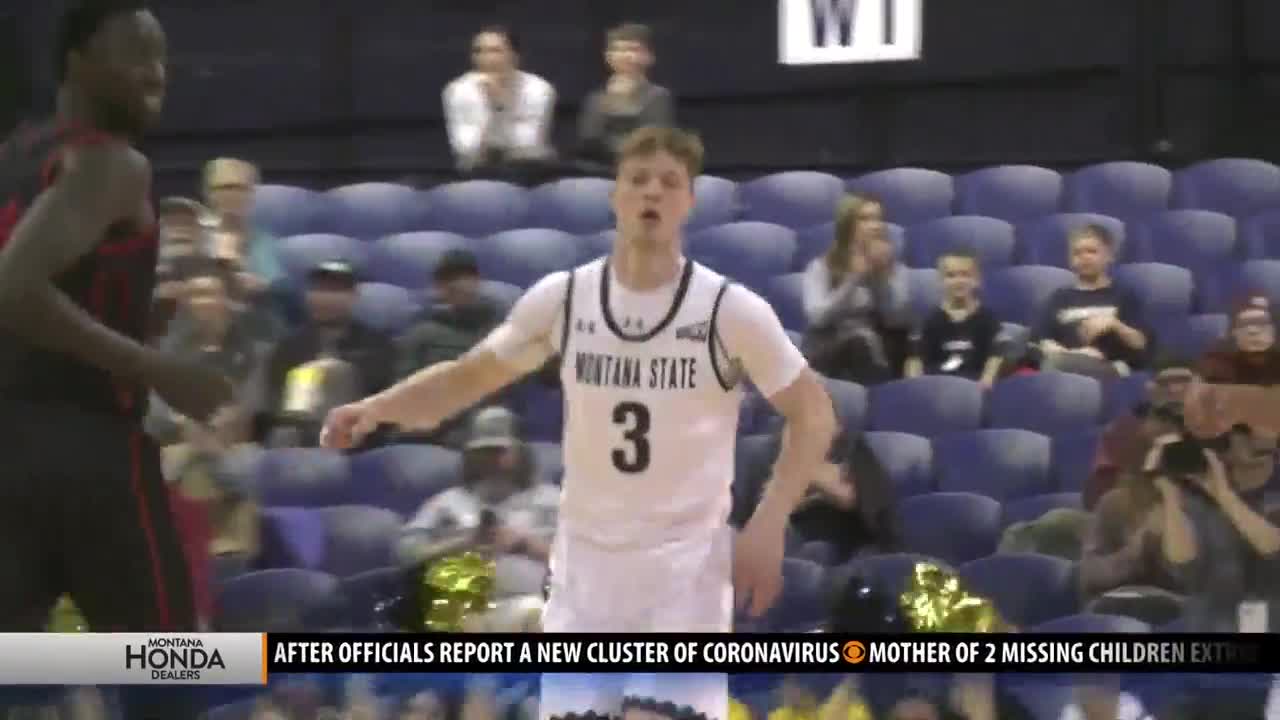 BOZEMAN -- Harald Frey isn't interested in ranking the importance of his shots, but by anyone's measure, his shot with 37 seconds remaining in Montana State's Thursday night contest against Southern Utah is near the top of the list.

"The clock was running down and John Knight Is a good defender and really quick," Frey said of the 3-pointer from the cat-head logo that spans the center court area of Worthington Arena. "He's more athletic than I am. He gave me a little bit of cushion there, so I thought that was a better shot than trying to go by him."

The shot ripped through the netting on the west end of the gym, brought the crowd of more than 3,000 to a roar, and gave the Bobcat a 73-65 win that – coupled with Northern Arizona's loss at Portland State – clinched MSU's men's basketball's first first-round bye in the Big Sky Tournament since the league expanded to 11 teams. "It was a good shot," Frey conceded, "and the most important thing is we found a way to win."

Danny Sprinkle, who has both witnessed and made many big shots in that building, was not surprised by Frey's clutch bomb. "That's just Harald Frey," Sprinkle said. "He makes the big shot every time we need it. He's done it all year, every game, he's the critical piece."

The box score might indicate that the win was fairly comfortable, as the game featured only one lead change and two ties. Southern Utah's biggest lead was two points, coming on Dwayne Morgan's jumper to open the proceedings, while Montana State led by as many as 17. But the mood in the Fieldhouse on Thursday night would indicate anything but comfort. Southern Utah's full-court pressure throughout the second half helped the Thunderbirds reel MSU in whenever the Bobcats built a lead.

After Frey's jumper pushed the lead to 17 with 16:34 to play, Southern Utah used a 15-4 run to get back into the game. The lead reached 13 when Frey sank a pair of free throws with 9:15 to play, but again SUU answered by scoring eight straight. SUU cut the lead to 2 with five minutes to play on a pair of Dre Marin free throws and did so again when Maizin Fausett hit a short jumper with 2:43 remaining.

The biggest defensive play of the night came just after that, when Jubrile Belo swatted a Cameron Oluyitan layup with 2:24 to play, then snatched the ball out of the air. Belo said the play showed the perfection of a technique he's been working on throughout the season. "If one of my guards gets beat, I've got to come over," the sophomore forward said, "and most of the time I come over too early and he dumps it down to the big. I made sure to wait for him to think he has an open layup, and as soon as he goes up, I can contest a shot."

Sprinkle was thrilled with what he saw. "I didn't see nothing but Jubrile about two feet above the rim, he slapped it off the glass then he secured it," Montana State's first-year coach said. "(The score was 66-62) when it happened, and if they get (the basket) and cut it to (two), that's a game-changing play."

Starting at the 2:43 mark, the Bobcats made six of their last eight free throws to close the game, and in all converted 18-of-25 in the second half and 21-of-31 on the night. Southern Utah made 16 of its 21 charity tosses. "Thank goodness we made free throws when it mattered in the second half, 18 of 25 was huge," Sprinkle said.

The Bobcats answered Southern Utah's attacking, pressure defense with aggression. "We stayed aggressive," Sprinkle said. "They made the game kind of ugly when they're pressing, and once you break the press ,they try to not let Harald get it back."

Frey's timely shots were huge, but other Bobcats contributed. "Our guys made some huge shots," Sprinkle said. "I thought Mychael Paulo and Ladan (Ricketts) hit some huge 3s, especially early in the second half to get a lead big enough to hold on." Those two combined to make four of seven 3-point attempts.

Statistically, though, the lines of Frey and Belo stand out. Frey had 22 points, and as Sprinkle pointed out, "six rebounds and four assists." Belo's 25 points were a game high and he grabbed 11 rebounds.

But Sprinkle said just as important as what was done was what wasn't. "I thought the key against Southern Utah was you can't turn the ball over and you can't take bad shots. When they're going downhill, they're either going to lay it up or dunk it, or they're going to get you in foul trouble, which they did at times in the second half." The 'Cats turned the ball over only a dozen times, six in each half. Southern Utah scored just seven points off the fast break, 10 off of turnovers, and five off of the team's five offensive boards.

Frey said that Montana State's maturity and growth as a team continues to pay dividends. "Staying in the moment, taking it one possession at a time" was important, he said, as was maintaining focus. "We wanted to stay composed and stay together and do the little things."

The little things added up to a big win. Montana State raised its record to 16-14 overall, 10-9 in the league. In addition to wrapping up a first round bye in the Big Sky Tournament, MSU clinched the team's first winning regular season since 2016-17 and only the second at MSU in the last decade. Southern Utah falls to 15-15 overall, 8-11 in Big Sky play. The Bobcats close the regular season Saturday with Senior Day against Northern Colorado at 4 p.m.