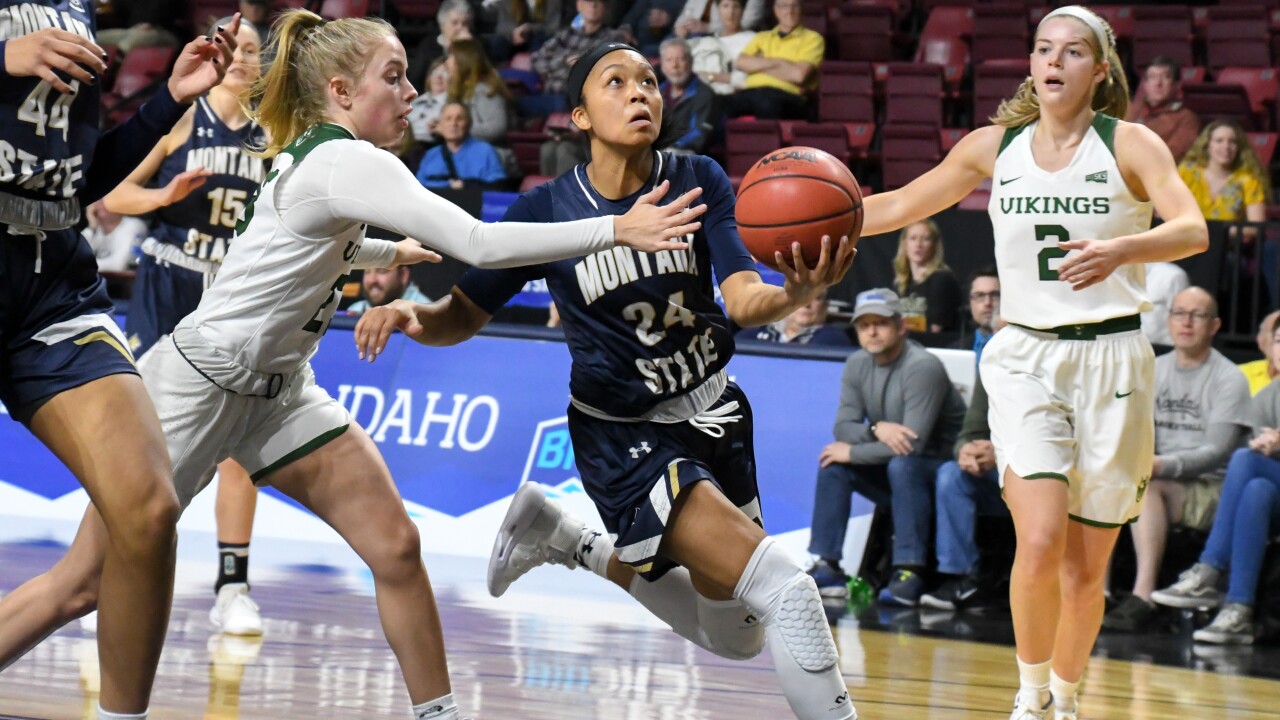 GREELEY, Colorado -- Montana State took advantage of two big runs in the third and fourth quarters, respectively, to post a 73-63 victory over Northern Colorado on Friday night in Bank of Colorado Arena to close out the Big Sky Conference regular season for both squads.

Montana State (23-6, 19-1) finished league play with 19 victories, the most in the 32-year history for women in the Big Sky. In addition, the Cats tied the University of Montana (2012-13) men’s team for most wins recorded in Big Sky Conference history.

“We’ve said all along that this team is special,” said MSU head coach Tricia Binford. “It wasn’t easy tonight, and credit Northern Colorado, they played hard. This team has done some things that no other teams have accomplished. We can celebrate that, but we know there is a lot more work to be done.”

Most noticeably, the Bobcat effort under the boards was lacking in the opening half as Northern Colorado (12-17, 8-12) out-rebounded MSU 22-11. Montana State was able to grind its way to a 20-15 lead at the 6:49 mark of the second quarter, but UNC regained the lead with an 8-1 run to go up 23-21 with 3:49 remaining until halftime. The two squads traded baskets, before MSU’s Oliana Squires hit an off-balanced shot from the top of the key as the buzzer sounded to give the Cats a 32-30 advantage at intermission.

“Defensively, we have a lot of work to do,” Binford said. “UNC was killing us on the boards and were getting second and third opportunities. That was certainly a key point for us heading into the game and was something we addressed at halftime.”

Leading 40-38 at the 7-minute mark of the third period, the Cats rattled off a 7-0 run and held a 53-46 cushion heading into the final frame. Fallyn Freije paced MSU in the third quarter with seven points.

MSU used its second big run of the contest opening the final 10-minutes on a 12-3 streak and took its largest lead of the contest at 65-49 with 5:30 remaining following a Squires’ pull-up three-pointer. MSU maintained its double-digit lead down the stretch to record its 15th consecutive victory- second most in school history to the 1987-88 squad that recorded 17 straight to open its season.

The Bobcats shored up the glass in the second half outrebounding the Bears 25-20. Freije pulled down eight boards in the fourth quarter to guide the Cats.

“We did a better job on the boards and on the defensive end in the second half,” Binford said. “We were cold with our shooting compared to the last few games, but the thing I love about this team is they never get down, they just find a way to win. They’re great competitors.”

Squires paced MSU with 15 points, while adding three rebounds, three steals and three assists. Also in double-figures were Freije and Darian White with 12 points, apiece. Freije also pulled down a team-best 11 rebounds for her sixth double-double of the year. For the game, MSU shot 46 percent from the field, 29.4% from beyond the arc and 62.5 percent from the line.

The Bobcat defense forced 22 UNC turnovers which they converted into 14 points.

UNC was led by Jasmine Gayles and Alisha Davis with 15 points, apiece.

Montana State enters next week’s Big Sky Conference tournament as the No. 1 seed and will open action in quarterfinal play, Tuesday, March 10 at 12 p.m. against the winner of No. 8 Northern Colorado/No. 9 Sacramento State at CenturyLink Arena in Boise, Idaho.