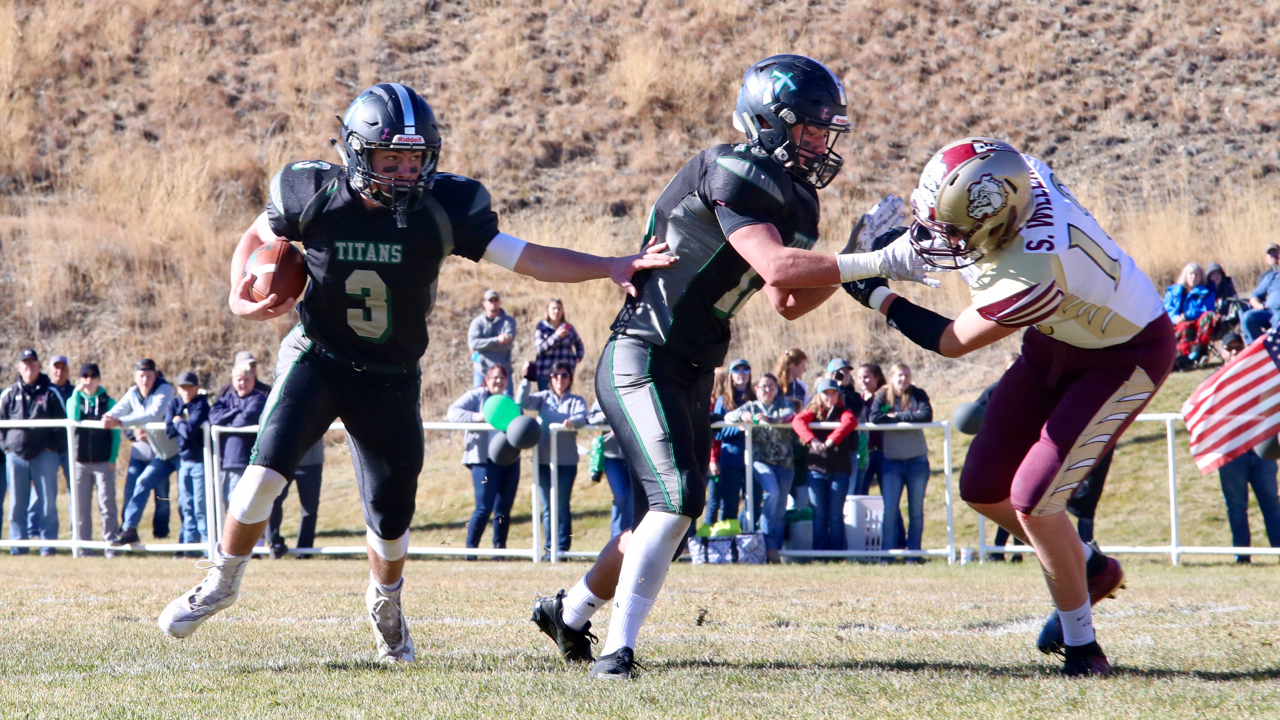 MELISSA HEMPSTEAD/Copperhead Country
Drummond-Philipsburg&#39;s Kade Cutler (3) runs a quarterback keep against Choteau in the first round of the 8-Man football playoffs.

“Honestly, I feel like I’ll fit in better (at Montana State),” Cutler told MTN Sports. “They told me a long time ago I need to figure out where I fit best, and I believe that I fit at MSU. It felt like a family to me, and I couldn’t be more happy to be part of the Bobcat family.”

Cutler, now a dynamic 6-foot, 180-pound athlete, grew up a fan of the Grizzlies but was ultimately drawn to the Bobcats this spring. Cutler said Montana State special teams coach B.J. Robertson offered him a scholarship in January after he had attended camps and games in Bozeman.

The Bobcats will be getting a talented do-everything athlete in Cutler. He’s played quarterback and defensive back for the Drummond-Philipsburg co-op Flint Creek Titans, earning all-state honors each of the past two seasons, but Cutler said the Bobcats have talked with him about primarily playing running back or possibly a safety position.

“It doesn’t matter to me as long as I’m on the field,” Cutler said. "I can’t wait to be on the field with my teammates, and wherever I fit in the system is where I’ll play. Team guy.”

Cutler burst onto the 8-Man scene as a sophomore when he was the starting quarterback for a Titans team that won its second consecutive state championship. He then helped an inexperienced squad back to the playoffs as a junior last year. The Titans finished the regular season with a 6-3 overall record, ultimately advancing to the second round of the 8-Man playoffs, where their season ended against Great Falls Central.

Cutler had a monster statistical season, finishing with 1,435 yards and 29 touchdowns on the ground and another 1,473 yards and 24 touchdowns through the air. He also returned three punts and two kickoffs for touchdowns.

With his commitment now solidified, Cutler will look to help the Titans back to the postseason and potentially another championship run this fall in what will be his dad’s final season coaching the Titans. Mike Cutler is one of the legendary figures in Montana 8-Man football, having etched his name in the Montana High School Association record books as a runner in the 1980s. He enjoyed a Hall of Fame career at Montana Western before entering the coaching ranks.

The elder Cutler has served as the Flint Creek coach since 2014, sharing duties with Jim Oberweiser from 2014-16 and then taking the solo lead in 2017. Mike Cutler plans to retire from coaching after this season, which will be his 25th as a coach, so that he can watch his son play in college.

“It’s awesome. It’s definitely not normal,” Kade Cutler said of playing for his dad. “He means more to me than a father, coach. I wouldn’t be the man I am or the son I am without him.”