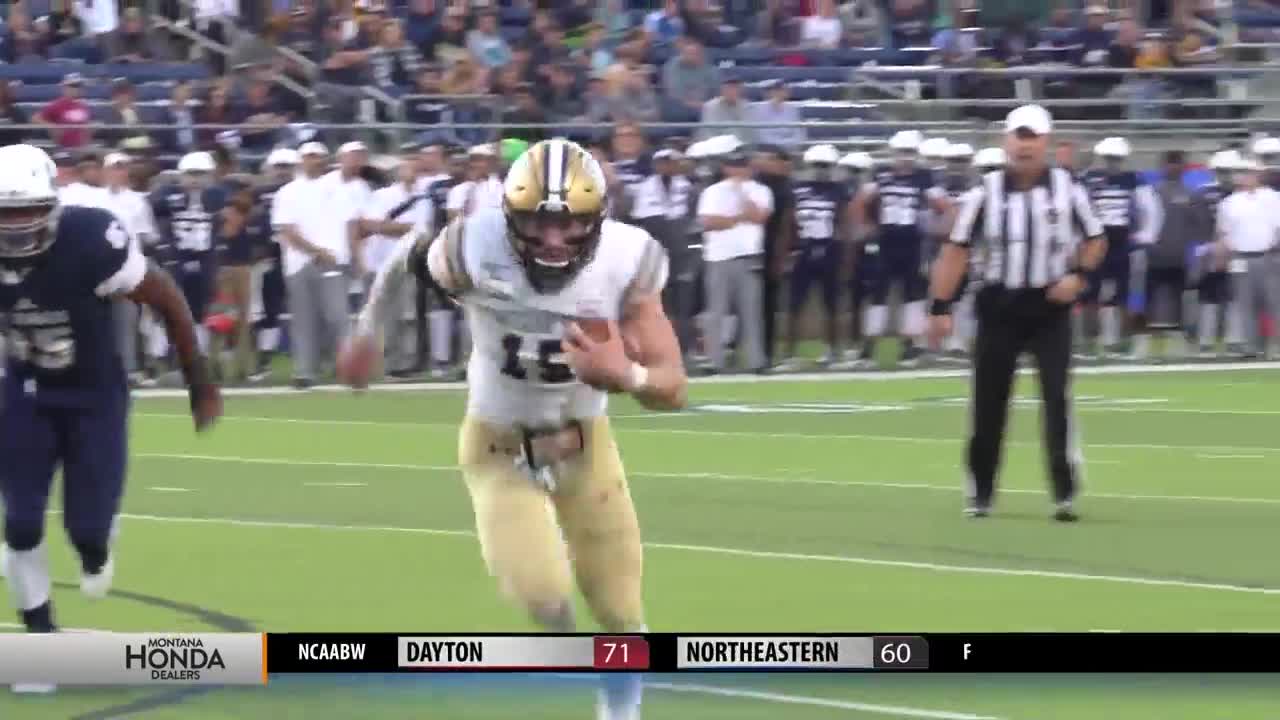 DAVIS, Calif. -- Jeff Choate doesn't care who steps up or how, as long as his Montana State football team wins and improves, and that was the case Saturday night at UC Davis Health Stadium as the Bobcats rallied past UC Davis 27-17 in a key Big Sky Conference football contest with likely postseason implications.

"It's a tough place to win on the road. This is a defending conference champion with one of the best players in the FCS, and for us to come in here in a game where they had a lot on the line, they weren't going to roll over for us. We knew it was going to be a fight," said Choate after his team's fifth conference win of the season.

MSU's head coach had high praise for Davis quarterback Jake Maier, who was one of many Aggies celebrated on Senior Night. But on the night Maier broke the program's record for career passing yards, it was Montana State that left celebrating. Travis Jonsen, Troy Andersen and Isaiah Ifanse each rushed for a touchdown for No. 10 Montana State, which improved to 8-3 overall and 5-2 in Big Sky play, keeping pace with the front-runners in the league -- Montana (9-2, 6-1), Weber State (8-3, 6-1) and Sacramento State (8-3, 6-1).

"We always talk about dragging them into deep water. We do what we do and don’t panic and keep fighting," said Choate, whose Bobcats held Maier without a passing touchdown and limited the Aggies to a 2-of-14 performance on third downs and an 0-for-3 effort on fourth downs. “(The defense) rose up at the most opportune times, whether that was in the red zone, on our money downs, and then obviously having (three) fourth-down stops was big, big, big in this game.”

That Bobcat defense was on display on the opening drive, which UC Davis quickly drove into the MSU red zone. But the Bobcats took the cliche "bend don't break" mentality, stopping Maier and the Aggies on a fourth-down attempt. The two teams traded the next five possessions, with Andersen coughing up a rare fumble on MSU's first drive, but the utility player made up for it with the first touchdown of the game on a 5-yard rush near the end of the first quarter.

The touchdown was set up by Tucker Rovig's 47-yard pass to Travis Jonsen that brought MSU to the 5-yard line.

"I really felt like Tucker Rovig played his best game as a Bobcat," Choate said of his signal-caller, who finished 17-of-25 passing for 217 yards. "He was very poised, managed the offense tremendously well."

Davis tacked on a field goal to open the second quarter, drawing within 7-3, then Ulonzo Gilliam scored a 4-yard touchdown on the Aggies' next possession to give home team a 10-7 advantage. Then MSU's defense and special teams took over.

Nose tackle Jason Scrempos blocked a Davis field goal attempt later in the second quarter, getting both hands high in the air and knocking the ball from its trajectory. Three plays later, Jonsen burst 75 yards down the field for an MSU score that put the Bobcats back in front, 14-10.

"We called a different call that time, so I lined up on the outside of the extra tackle and just kind of went down," said Scrempos, who had four tackles, one for loss. "The tight end stayed with one of our other guys, it was planned that way, and I just jumped through the gap. It was cool."

"It was a busted play, but I felt like I had to make something happen, get some positive yards out of it," said Jonsen of the touchdown run. "It just happened that it turned into a 75-yard touchdown run. That was pretty good."

Brayden Konkol intercepted Maier less than a minute later, and the Bobcat offense moved back inside the red zone following a Kevin Kassis 43-yard reception that left three seconds on the clock, but MSU's field goal team couldn't get a snap off in time to tack on three more points before the half.

The Aggies briefly took the lead in the third quarter when Gilliam rumbled 18 yards for a 17-14 lead, but arguably the biggest play of the game came on their next drive when coach Dan Hawkins elected to go for a fourth-and-1 attempt that was stuffed by MSU linebacker Josh Hill for a turnover-on-downs. Tristan Bailey's 37-yard field goal early in the fourth quarter tied the game, and Ifanse scored on the next possession to give MSU the lead for good.

Bailey would add a 41-yard field goal in the final minutes to bring the score to its final, 27-17.

“(Ifanse) is a difference-maker. I think everybody saw the type of player that young man is a year ago," said Choate. "We’ve been without him, so having Isaiah back is a nice thing.”

Ifanse finished with 10 carries for 77 yards and the score, while Jonsen had a team-high 93 yards on six attempts, with 75 of those coming on the touchdown run. Kassis played arguably the greatest role for MSU's offense, giving Rovig a consistent target on third downs. Kassis finished with seven receptions for 135 yards.

"We executed on some deep balls. Tucker gave me a great chance to go up there and grab some," said Kassis. "We ran the ball really well. It was great having Isaiah back. ... Tucker just gave me a good chance to go up and get the ball. They have a good secondary, that No. 21 (defensive back Devon King) is a good player and we were nervous for this week, but I felt that I was able to get some separation and get over the top, we were able to connect on a couple of big ones and that was fun."

Montana State looks to improve its postseason resume in the regular-season finale, the annual rivalry game against the University of Montana. The Grizzlies (9-2, 6-1) impressed in Saturday's 35-16 win over No. 3 Weber State. The Cats and Griz kick off at noon Saturday, Nov. 23 at Bobcat Stadium.