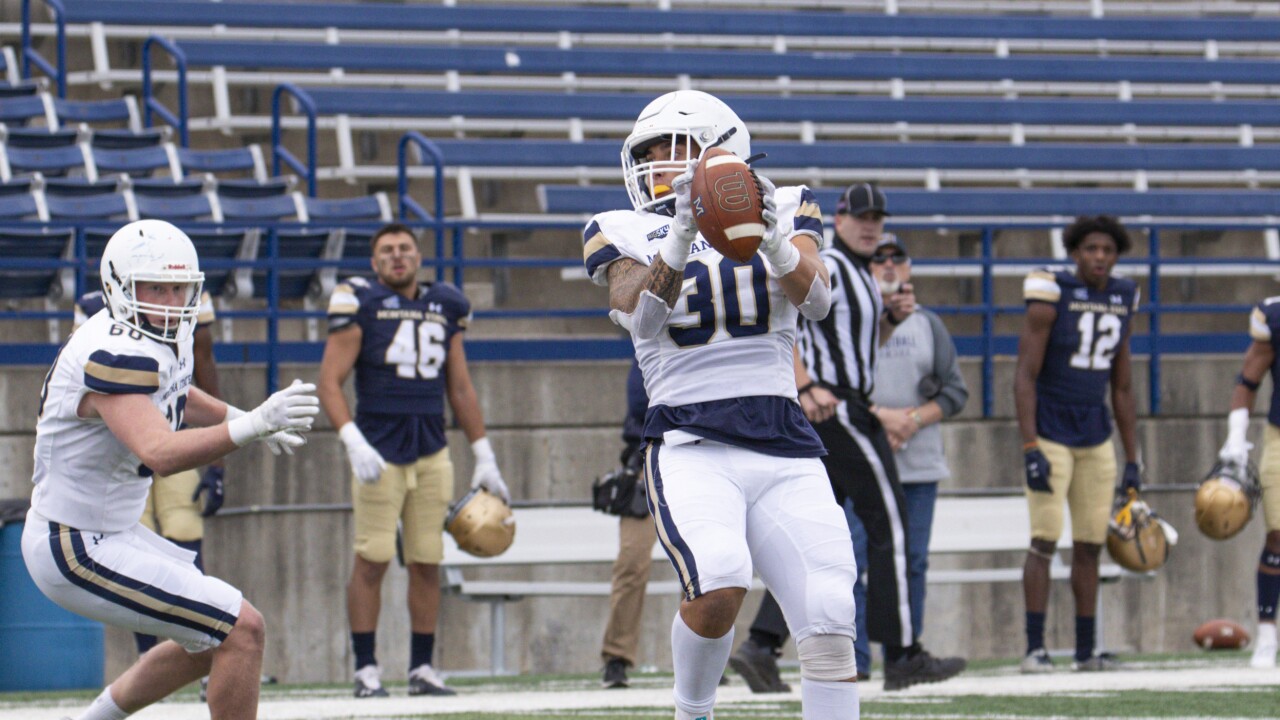 BOZEMAN – Down to the final play of the afternoon, one team was going to make a play.

It was the White defense.

After marching the Blue offense to the four-yard line Matt McKay threw a pass into the end zone, the ball was batted into the air, and Tadan Gilman snared the ball for an interception to preserved White’s 14-7 victory in the 2020 Bobcat Fall Brawl Presented by Hilton Garden Inn. The scrimmage capped a fall unlike any other in the Bobcat football program.

“It was pretty exciting,” MSU head coach Jeff Choate said of the scrimmage between teams that were drafted by the assistant coaches. “I thought it was pretty even.”

Choate praised McKay for moving his team down the field in the final two-and-a-half minutes.

“I thought Matt extended some plays and gave us opportunities,” he said, “and did a really nice job operating. And then it came down to one play. Even in that situation I thought Matt did a nice job sliding in the pocket, trying to keep the play alive, and he gave us a chance. That’s what you’ve got to do in that situation. You don’t want to take a sack, you want to put the ball up in the air and see if somebody can make a play. Credit the White defense, they made the play.”

The White staged a strong drive to open the day’s activity, advancing to near midfield before being forced to punt. On its second possession, the White offense was intercepted by Michael Jobman. The Blue offense staged its first strong drive in the second quarter, taking over near midfield. A 30-yard pass from Casey Bauman to Lance McCutcheon gave the Blue good operating position, and Bauman was three-for-four on the scoring drive that was capped by a two-yard Lane Sumner touchdown.

On the ensuing drive, the White offense answered. Tucker Rovig completed three passes – five-yarders to Jaharie Martin and Charles Martin and a 22-yarder to Jaden Smith. Elijah Elliott then carried for seven yards and eight yards and, after a 16-yard rush by Mark Estes, a nine-yard touchdown. Jeffrey Manning’s interception ended a Blue team scoring drive, and sent the game to halftime.

The scrimmage turned in the fourth quarter, when Bauman was intercepted by Uluilakepa, a freshman linebacker who has had an outstanding fall. Taking over at the Blue 12-yard line, the White offense took advantage. Elliott gained seven yards, Martin gained four, and on the series’ fifth play Martin lunged in from two yards out for the touchdown. That set up the Blue offense’s final, fateful drive.

Choate like what he saw from both team’s ground game.

“It’s Bobcat football,” he said. “It probably doesn’t look that much different than it has in the past. I mentioned Elijah Elliott coming into the scrimmage and I thought Elijah had some really nice runs today. Lane (Sumner) was awesome in pass pro, that’s something that will go a little (unnoticed). We didn’t really let (Isaiah Ifanse) play a lot, that would have tilted things a little toward the blue team. That was by design, we know what Isaiah can do. We wanted to see some of those young backs get an opportunity and Lane was the most veteran back with the Blue team in that last series. He made a couple of blitz pickups that were really impressive.”

Each defensive unit also impressed Choate, in spite of each team being thinned in the front four by injuries.

“I thought they tackled well," he said. "That was the thing that was my takeaway. I thought the linebackers played well at the line of scrimmage. The area where we were really depleted was across the front.”

Saturday’s Fall Brawl Presented by Hilton Garden Inn concludes “spring ball in the fall,” as Choate has called it. Beginning Monday the team enters a six-week period of strength training punctuated by occasional off-season team activities. It will primarily be a time for healing from injuries and gaining strength in preparation for a potential Big Sky Conference spring season.