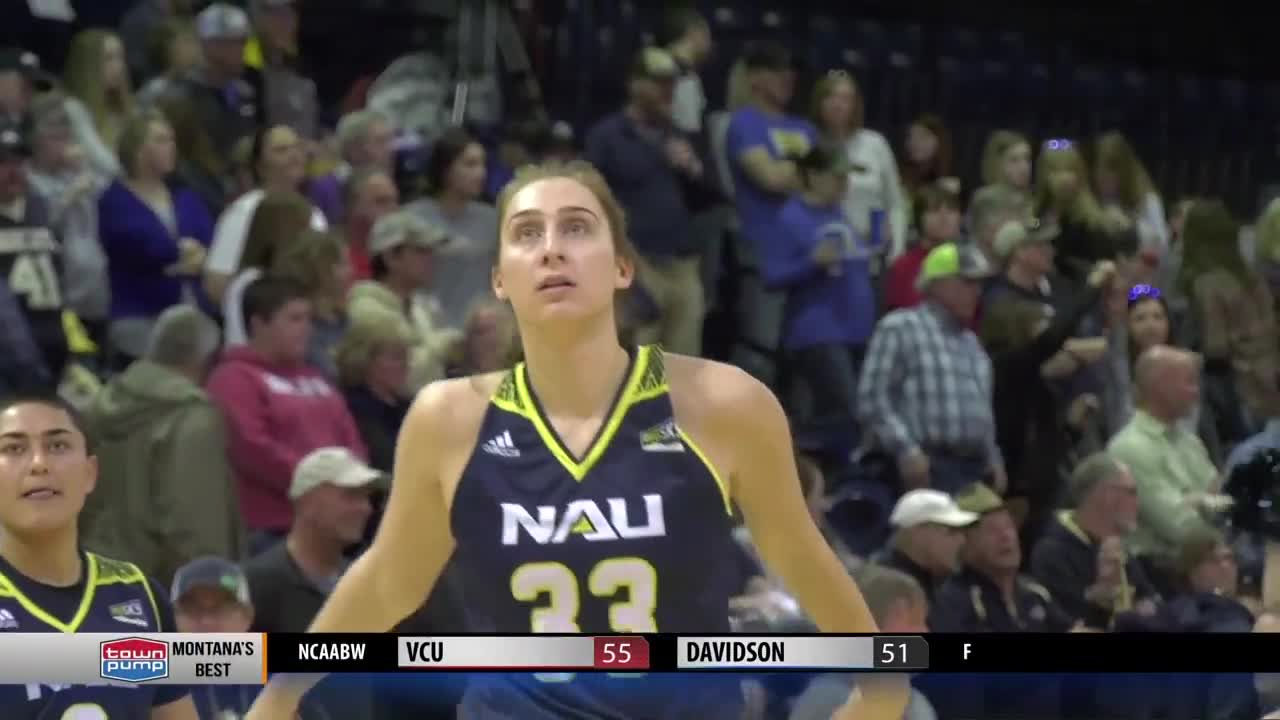 BOZEMAN -- None of Montana State’s five-player senior class majors in history, but together they made some on Saturday.

Senior Blaire Braxton’s two free throws with two minutes to play capped a furious second-half comeback, as Montana State beat Northern Arizona 73-71 in Worthington Arena on Saturday. The win extended Montana State’s win streak to 13, the team’s 21st win is tied as the fourth-most in a season in school history, the 17th conference win is the most by any women’s team in Big Sky history, and the 78th win by the team’s three fourth-year seniors ties for the most by a class with last year’s senior contingent.

The path to Saturday’s historic win, which came on Senior Day, was anything but easy. “When three of your starting lineup is still crying and you’re tipping off, I looked at my assistants and said, ‘This will be interesting,’” Montana State coach Tricia Binford said. “It’s just hard. Your seniors are wrapping up a career on their home court and it’s hard to lock in and get that out of the way.”

After the game was tied at four 90 seconds in, Northern Arizona (15-13, 12-7) used a 10-2 run to seize command. Montana State (21-6, 17-1) pulled to within one when senior Oliana Squires hit a short jumper near the end of the first quarter, but the Lumberjacks used a 12-1 run late in the second quarter to build a 40-26 lead at the intermission. NAU hit six three-pointers to Montana State’s one in the first half, and MSU hit only six of its 14 free throw attempts in that stanza.

Binford said she thought her team’s emotion combined with Northern Arizona’s hustle and execution spelled the difference in the first half. “You try to get some time during the national anthem, but these kids care a lot about each other and they’ve been very, very close. Credit NAU jumping out, I thought they were fantastic during the first half. I thought they were getting all the hustle plays, the loose balls, the second opportunities on the glass. We just had to regroup at halftime and play the last 20 minutes the best we could.”

NAU’s 43 perfect shooting in the first half, including 9-for-19 from the arc, spurred the Cats into mixing in more zone defense in the final half. The result was two quarters in which the visitors shot 39 perfect, including just 1-for-10 from the three-point line.

“Part of it was we changed up our defenses a little more often” in the second half, Binford said. “I think NAU’s got a lot of great scorers, they really stretch you out, so we wanted to be a little more attack-minded defensively. We obviously talked about finishing plays as far as cleaning up the things we can control, the glass, the effort plays, the loose balls. I also think settling down at the foul line, missing free throws, those little things that add up that are usually a strength for us.”

“In the second half Blaire Braxton comes in and fights on the glass, does what she does,” Binford said. “Kids start battling the way they’re supposed to be battling, (they) locked in on the game plan and started executing a lot better. I think (Braxton’s rebounding is) a heart thing. You can teach kids technique all day long, and anticipation, but this kid has tremendous heart. She’s a fighter, she’s a competitor, and she’s not going to get outworked on the glass.”

Braxton, one of the five seniors and one of the group of three who have played their entire four-year career in the Blue and Gold, tied for game-high honors with eight rebounds, including seven after halftime. She scored all eight of her points in the second half. Her classmates also found ways to contribute. Fallyn Freije scored 10 points and grabbed six boards, Martha Kuderer grabbed six rebounds, and Madeline Smith scored a dozen points with six rebounds. Her effort pushed the center over the 1,000-career point mark.

MSU closes out the regular season on the road next weekend, playing at Southern Utah on Wednesday and Northern Colorado on Friday. MSU plays its first Big Sky tourney game on Tuesday against a yet-to-be-determined opponent.