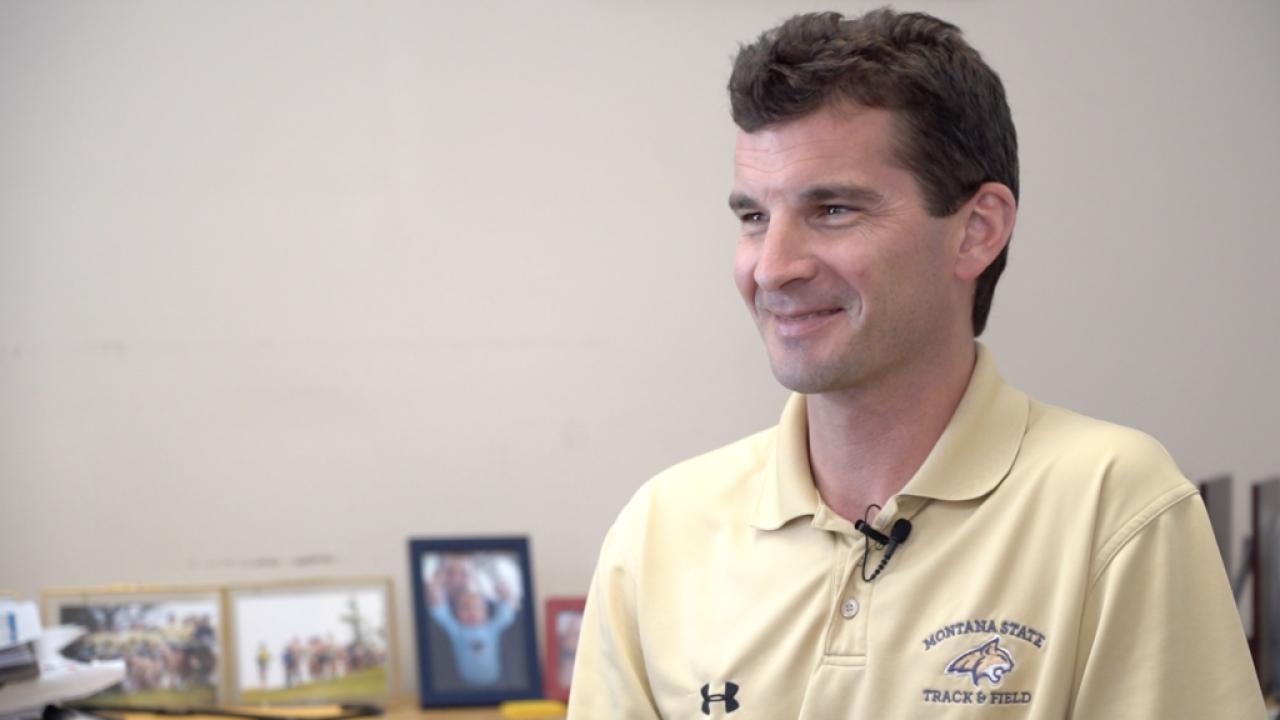 BOZEMAN – The Montana State track and field and cross country program will have a contingent of newcomers when the 2020-21 academic year begins. After previously announcing National Letters of Intent from four student-athletes in December, MSU Director Lyle Weese on Wednesday publicized the signing of four more to the program while eight others are also slated to join the Bobcats this fall.

"This group of future Bobcats is filled with talent," Weese said. "With their senior high school track season being canceled, this group is highly motivated with an incredible amount of untapped potential. Once these individuals have a chance to train and compete as Bobcats, we are going to see them reach new heights in their time at Montana State."

Delaney attended Fergus High School as a senior and ran for the Eagles' cross country team this past fall. She advanced to the MHSA State Class A Championships, earning 26th overall at the meet. Her highest finish was a fourth-place showing at the Fergus High Invitational.

Her top exploits during her prep career came on the track at Winnett-Grass Range. Delaney capped an accolades-filled junior season with three gold medals and a bronze at the MHSA Class C Track and Field Championships in May of 2019. The Rams' sprinter took first place in the 200, 400 and 800, while she finished third overall in the 100. Her time of 2:21.15 in the 800 finals was a personal best.

Moore was a fixture for the Bozeman High distance group participating on the Hawks' cross country and track and field teams. Moore finished in the top 10 individually in each appearance she made at the MHSA Class AA State Cross Country Championships, placing as high as fourth during her junior season when she completed a personal-best 5K time of 18:17.7. She had over 10 top-six finishes during her time on the Bozeman cross country team with several first-place marks. Moore placed as high as 21st at the Nike Cross Northwest Regionals as a sophomore en route to an appearance at the Nike Cross Nationals meet that season.

While Moore set lifetime personal bests in the 800 and 1,600 in the midst of her junior campaign, she set her lifetime best in the 3,200 at the Arcadia Invitational to open that season in California. She placed ninth overall with a time of 10:49.68.

Russell was a three-year standout in sprint events for Wind River High School. Russell helped spearhead the Cougars' second-place team finish at the 2019 WHSAA State Championships. She earned gold medals in the 100, 200 and 400, while also serving as the anchor leg of a gold medal 4x400 relay squad. She completed lifetime bests of 12.40 in the 100, 25.65 in the 200 and 56.34 in the 400 during her junior campaign. Russell had over 15 first-place finishes during the 2019 slate.

Russell's breakout junior campaign followed back-to-back seasons which ended at the WHSAA meet. As a freshman she took second overall in the 400 and 15th in the long jump. Despite not appearing in roughly half the events in any other of her seasons as a sophomore, Russell placed second in the 200 at the state championships and had a first-place showing in the 400 at her regional meet.

Vandersloot has been a standout for the Broncs cross country and track and field teams during her athletic career at Billings Senior. Vandersloot made appearances at the MHSA State Class AA Cross Country Championships every year competing for the Broncs, finishing a best fourth as a senior at the 2019 meet. Her senior cross country season featured a finish no higher than fourth in eight races and a personal-best 5K time of 18:02.9 that came in a first-place finish.

Schmautz was a contributor for the Frenchtown High School varsity program each season of his prep career. He made four appearances at the MHSA Class A Cross Country Championships, earning a personal-high third place as a senior in a time of 16:18.3. He also competed at multiple Nike Cross Country Northwest Regional Championships. Schmautz qualified for the Class A Track and Field Championships three times. He earned runner-up finishes in the 800 and 1,600 as a junior, along with an eighth-place showing in the 1,600 as a sophomore. He holds personal bests of 1:56.94 in the 800 and 4:33.94 in the 1,600.

Smith was one of Billings Senior's top performers in the boys distance group. He made his fourth trip to the MHSA Class AA Cross Country Championships, taking a personal-best 10th overall as a senior. His personal-best 5K time 15:27.8 came as a senior and also highlighted one of his three first-place showings in the fall of 2019. Smith has also raced in multiple Nike Cross Country Northwest Regionals. In track and field, Smith earned third in the 1,600 and fourth in the 3,200 at the Class AA Championships as a junior. He had seven first-place finishes during the season while setting lifetime bests in the 1,600 (4:24.52) and 3,200 (9:36.46).

Ascraft competed in cross country and track and field for Camas High School in Washington. She made two trips to the WIAA 4A State Cross Country Championships, finishing as high as sixth as a junior. That season included a 52nd-place at the Nike Cross Northwest Regionals and five top-three individual showings. In track and field, Ashcraft advanced to the 4A Championships as a junior in the 3,200. She had a personal-best time of 11:18.47 in her district event prior to state meet. She has experience also running in the 800, 1,600 and 3,200.

Carter qualified for two MHSA Class AA State Track and Field Championships for Helena Capital High School. She earned fifth overall in the 200 and 10th in the 100 as a junior, with personal bests of 26.11 and 12.79 in each respectfully set during the season. Carter was a member of back-to-back silver medal 4x100 relay squads for the Bruins. She's had over 15 top-three showings during her prep track career and also ran cross country for Helena Capital.

Fish has been a contributor to Skyline's varsity track and field program since her freshman season. That year, Fish made her first district championship appearance and made it to the finals of the 100. She made her first trip to the IHSAA 4A Championships as a sophomore, finishing 16 in the 100 and serving as a member of a bronze-medal winning sprint medley relay squad. Fish claimed back-to-back runner-up finishes in the 100 – at her district championships as a junior – with a personal-best time of 12.46 seconds while she also claimed a lifetime best 26.98 in the 200 during the season. She went on to compete at the IHSAA 4A Championships earning gold in the sprint medley relay and bronze in the 4x200 relay.

Stark made her first podium appearance at a MHSA Class AA State Track and Field Championship in 2019 as a junior for Billings West High School. The pole vaulter completed a personal-best height of 11-03 to earn a bronze medal in the event. She also finished second in the pole vault at the divisional meet. Stark cleared 11 feet five times during her junior season a year after clearing it for the first time to finish fourth at the Class AA Championships. Stark improved from 8 feet at the start of her sophomore season. Stark also ran the 100 and 200 during her prep career while specializing in the pole vault.

Sullivan has continued to develop in the pole vault and reached new heights in the past year. The Belgrade native qualified for the USATF National Junior Olympic Championships in July by clearing a new personal-best mark of 11-00.25. At the national meet, she placed 17th overall with a height of 10-08. Her junior track and field season ended at the 2019 MHSA Class A State Track and Field Championships with a second-place showing by clearing 10-06. Sullivan placed 10th at the Class A Championships as a sophomore in the event, while she previously earned eighth in the long jump at the state meet in the long jump. She also has experience competing in the high jump.

Yovichin has been a standout for Coeur d'Alene Charter Academy's cross country and track and field teams. Yovichin made four appearances at the IHSAA 3A Cross Country Championships, finishing a personal-best 11th as a senior. She completed her best 5K time of 20:11.0 during the season and her best overall showing of third in a race. She advanced to the IHSAA 3A Track and Field Championships on three occasions. Her best finishes came as a junior at the 2019 meet when she earned a silver medal in the 800 (2:23.98) and took fourth in the 400 (1:01.51). She was also a member of her team's first-place 4x400 relay squad and back-to-back champion sprint medley relay. She claimed back-to-back top finishes in the 400 at her district championships and was the top 800 finisher as a junior at the meet.