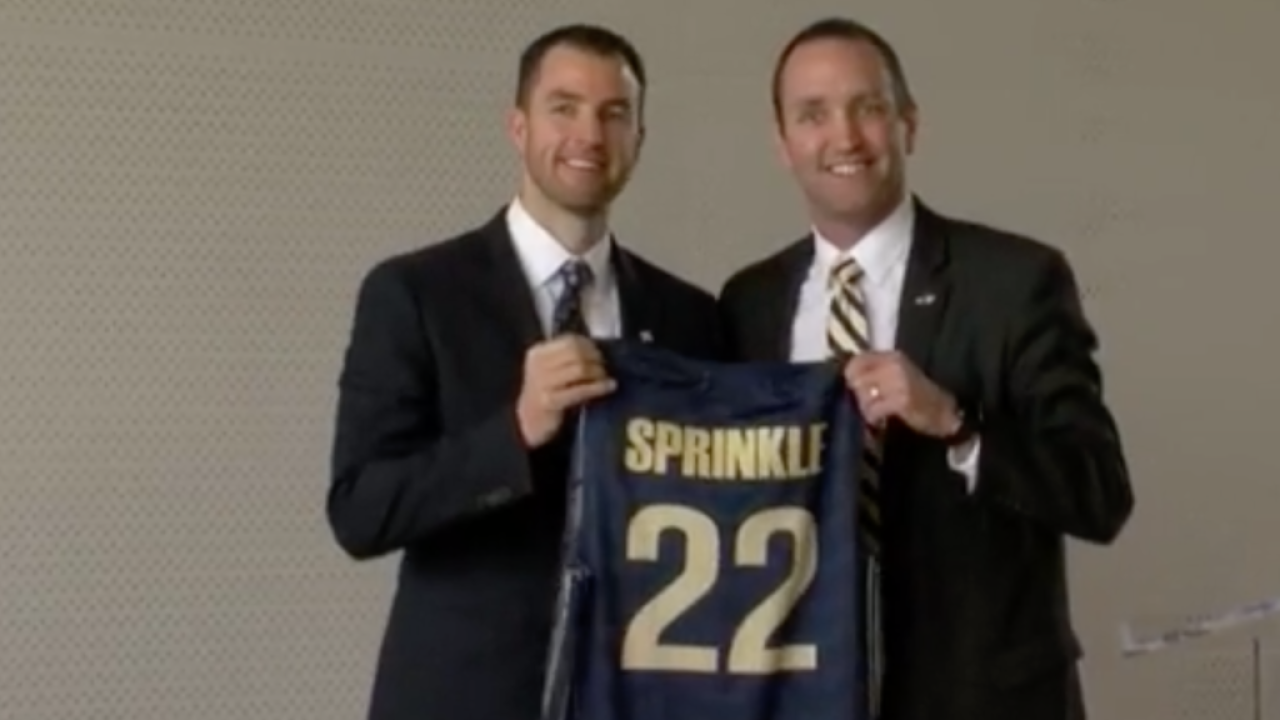 BOZEMAN – The Montana State men's basketball program opened the Early Signing Period on Wednesday, Nov. 13, with Tyler Patterson and Mike Hood submitting their National Letters of Intent to join the Bobcats. Patterson will be an incoming freshman and Hood will be a junior in eligibility when each joins the MSU roster under head coach Danny Sprinkle ahead of the 2020-21 season.

"Tyler (Patterson) is a huge part of building this program," Sprinkle said. "He's legitimately 6-foot-7 now and he could get to 6-8 and play as a two-guard. He can really shoot the ball, he's really skilled and he's played at a high level at Mount Si for Jason Griffith and at Team LaVine for Tayon Ary-Turner who have done tremendous jobs. He's not going to be a guy who comes in and you have to teach him the basics, he's going to have that stuff down. I'm excited for Tyler and his future as a Bobcat.

"We needed a guy that is dynamic with the ball and can get his own shot at the end of a shot clock and that's Mike (Hood). He's a tremendous shooter, he's about 6-foot-2 and is a great athlete who can really finish at the rim which I like. We had plenty of conversations with his junior college coach Jeff Reinert and Adam Donyes at Link Prep and they had great things to say about not only him as a player, but the type of person he is and how hard of a worker he is. I think he's a guy Bobcat fans are going to enjoy watching."

Patterson is preparing for his senior year at Mount Si High School looking to build off a strong summer and junior campaign. Patterson spent this summer playing for Team LaVine on the AAU circuit and competed in the Adidas Gauntlet Series for the second straight year. It followed a junior prep season for Patterson that ended with him earning 1st Team All-KingCo league honors and the 4A KingCo boys basketball defensive player of the year award. He's ranked as the fourth best player in the state of Washington and in the top 200 nationally by Prep Hoops in the class of 2020.

Patterson averaged 14.8 points per game, 4.5 rebounds and 1.4 assists in 29 contests last year while helping the Wildcats win their district title and advance to the WIAA 4A Boys Basketball State Championship game. He shot 48% from the field and 37% from 3-point range. He had 24 double digit efforts, including five contests of over 20 points in Mount Si's 29 games. Patterson recorded a double-double performance of 19 points and 10 rebounds in a Jan. 15 victory. He totaled 13 blocks and averaged over a steal per game for the Wildcats, recording a career-high 5 steals in an outing.

Patterson has improved over the first three seasons of his varsity career at Mount Si. He started as a freshman then averaged 13.5 points and 3 rebounds per game as a sophomore. That season he registered a career-high 33-point performance in a game. He was a 1st Team All-KingCo performer that year. He's served as a two-year captain for Mount Si.

"I had a message about Tyler Patterson the first day I got the job from his high school coach Jason Griffith," Sprinkle said. "What really attracted us to him was how tough he is defensively. He's a kid that when you talk to him, he talks about defense and locking guys up and using his length and athleticism. That's something you don't hear from kids these days. I'm very excited about him because obviously that's how I want to build this program. I want to play great defense.

"The other thing he can do is make 3's. He comes from a basketball family. His dad played at Utah State and was a Division I assistant coach too. I know his mom is super excited because she went to school here."

Mike Hood has played against various levels of competition in the last couple of seasons and is currently attending the College of Southern Idaho. Hood has averaged 20.5 points per game – including a 27-point effort on 8 of 17 shooting in the season opener – in four contests for the Golden Eagles this season. Prior to his arrival at Southern Idaho, Hood was enrolled at Moberly Area Community College and appeared in 35 games during his freshman year of eligibility.

Hood had two standout seasons for Shawnee Mission West High School in Overland Park, Kansas, before graduating in 2017. He averaged 21 points, 4 rebounds and 4 assists per game as a senior. He was an all-conference performer two straight seasons and earned 2nd Team All-State honors in his final prep season. After Shawnee Mission West, Hood spent a season at Link Year Prep in Branson, Missouri. Hood averaged 13.8 points and 3.4 assists per game while preparing for the college system. He was the team's leading 3-point shooter, finishing the year with 10 games of at least four 3-pointers made.

"I also have tremendous respect for his junior college coach, Jeff Reinert. I recruited his program a lot when he was the high school coach at Santa Margarita. He does a great job of developing guys. I know Mike will be Division I ready and we're expecting big things from him in his two years at Montana State."

The Montana State men's basketball team hits the road for four of its next five games. The Bobcats compete in three games at UNCG's Spartan Invitational in Greensboro, opening play against Appalachian State on Friday.