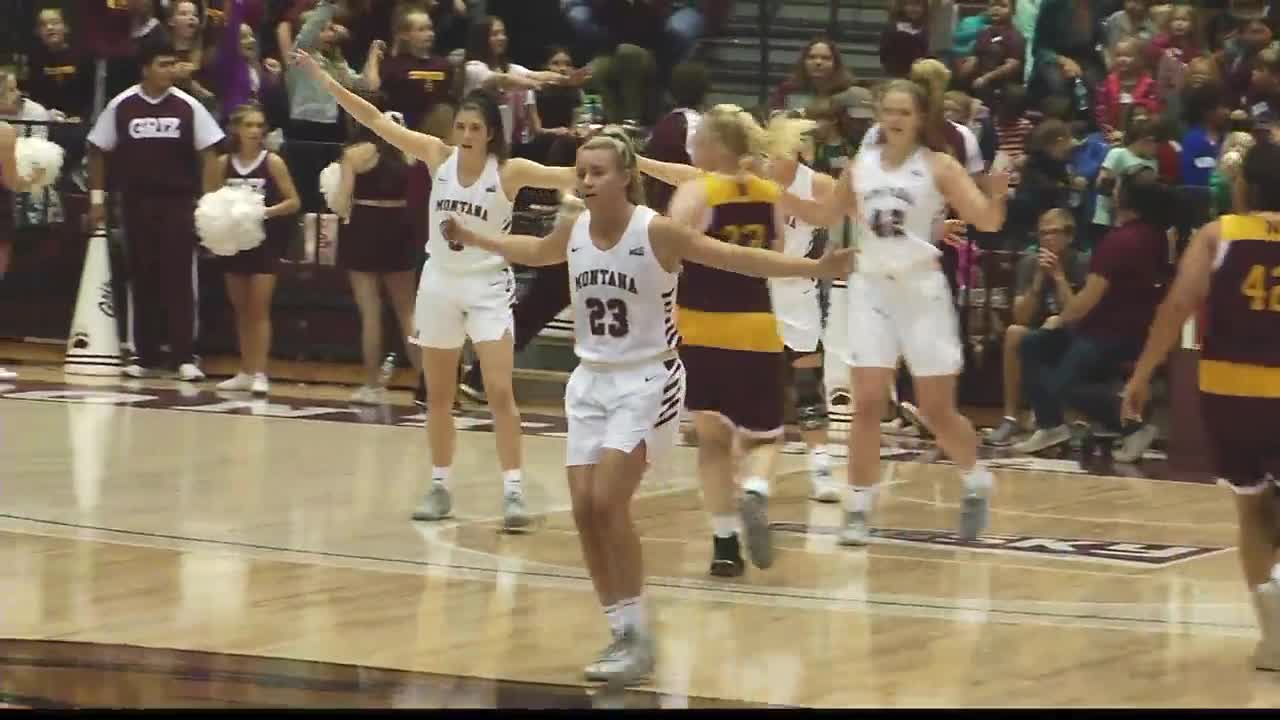 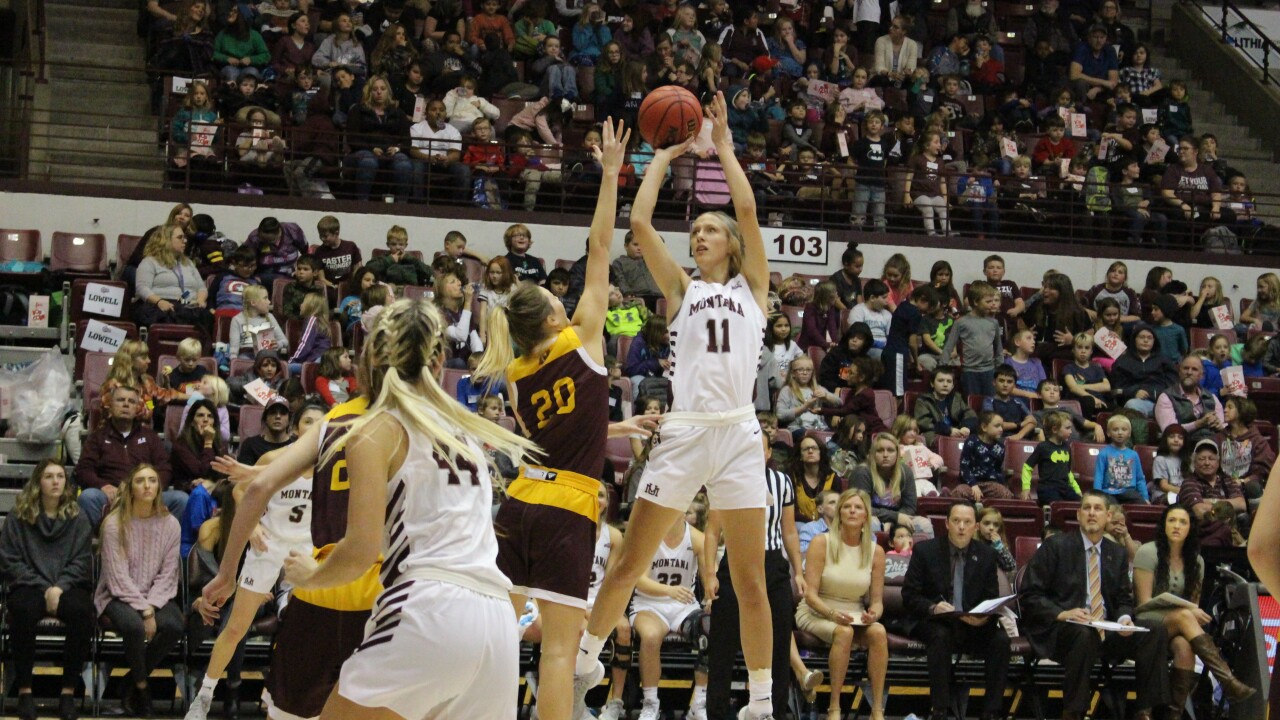 MISSOULA -- The fans went gaga at the sight of Taylor Goligoski on Tuesday at the third annual Lady Griz School Day, and that was before she hit six 3-pointers and scored 20 points to lead Montana to a 98-45 victory over MSU-Northern in front of a boisterous crowd of 7,205 at Dahlberg Arena.

Goligoski has an aunt who’s a teacher in Shelby, and her class was one of the first through the door on Tuesday morning. Another aunt’s class from Hot Springs wasn’t far behind, and the two groups, some of the lucky few with courtside seats, lost it when their hero for the day made her first appearance.

The game was still more than 60 minutes from tipping off.

“It definitely motivates you. It gets you going and pumped up to hear all those kids screaming. It was a great feeling and definitely sparked some intensity,” said Goligoski.

Once the game got underway, after another 5,000-plus kids had made their way to their seats, it was all Lady Griz. Montana scored the first 15 points, went 11 for 19 from the arc and set a new program record with 30 assists on 41 made field goals.

After getting pushed by Lewis-Clark State and surviving Carroll in overtime in exhibition games, Montana’s third opponent from the Frontier Conference to begin the season simply got overwhelmed.

“It’s always a lot easier when the shots are going in,” said coach Shannon Schweyen, whose team shot 59.4 percent, going 41 for 69. The 41 made field goals were a program record as well.

“We shot the ball extremely well, so we were able to get them a little frustrated from the get-go. It always helps when you come out and light them.”

Gabi Harrington put match to the fuel provided by Montana’s largest crowd since the NCAA tournament game of 7,413 against Louisiana Tech in 2004 by hitting a pair of 3-pointers in the game’s opening 90 seconds.

She could have done a mic drop at that point. Her work was done (even though she’d play another 28 efficient minutes. Her team was a preposterous +42 when she was on the floor.)

Montana’s starting five got the Lady Griz out to a 15-0 lead. The four available players off the bench -- Goligoski, Sammy Fatkin, Jamie Pickens and Kylie Frohlich -- did most of the heavy lifting after that.

That quartet, with Fatkin adding 17 and Pickens 11 to Goligoski’s 20, would actually outscore the starters 53-45.

“Overall a great effort by the entire team,” said Schweyen. “Everybody came in and did something good. Everybody played well. Everybody got some boards, got some assists and scored, which is a bonus.”

That Goligoski needed just 10 shots to put up her 20 points, her highest scoring game since December 2016 during her redshirt freshman year, hints at what kind of day it was for the fifth-year senior.

She actually missed her first shot, a 3-pointer in the opening quarter, right in front of her cheering section. Then it was six straight makes from the arc until an off shot late in the fourth quarter that felt oddly out of character on this day.

“I just went in there with confidence,” said Goligoski. “I missed my first shot but after that I said, All right, I’ve got to knock a few down.

“As a team we did a really good job sharing the ball today. It went well.”

Carroll was picked first in the Frontier Conference preseason poll and played like an NAIA title contender last Tuesday. Lewis-Clark came in fourth in the poll with a first-place vote. Both teams were able to match up physically with Montana and execute offensively.

Despite having former Lady Griz Hailey Nicholson on the roster, the Skylights, picked sixth out of seven teams in the Frontier, had little chance against Montana’s size and length.

They shot 31.8 percent and made only eight shots inside the arc. Ball-handlers were hounded, passing lanes were clogged, post entry passes were largely unavailable.

The Skylights retreated farther and farther from the basket as the game went on, taking 12 of their 22 second-half shots from 3-point range.

“I liked our defensive intensity from the beginning,” said Schweyen, whose team forced 25 turnovers, the most by one of her four teams as head coach.

“I thought we created some turnovers and got in the lanes a little bit and deflected some passes that led to some easy ones.”

If it wasn’t 32 points off turnovers or their 42 points in the paint, the Lady Griz were raining threes. Led by Goligoski’s 6-for-8 performance, Montana finished 11 for 19.

It was 112 games ago, in Robin Selvig’s final season, with McCalle Feller playing the role of Goligoski, that Montana made that many from the arc.

“It was so good to see Taylor come in and knock them down,” said Schweyen. “The team needs that. It’s always great when you feel like you can get them shots, and she’s been answering.”

It was the type of performance that was able to overshadow the productive game by Sammy Fatkin, who went 8 for 14 to finish with 17 points (two off her career high) and four assists.

McKenzie Johnston was herself, totaling 10 points, seven assists, five rebounds, two blocks and an assist. She even got to spend 17 minutes on the bench, enjoying the work done by her teammates, which is a new look for her.

Sophia Stiles, Emma Stockholm and Abby Anderson combined for 23 points on 11-of-21 shooting, with seven assists and five steals as another Lady Griz School Day comes to an end.

“What an awesome day for these young ladies to be able to play in front of a crowd like this,” said Schweyen.

“I can’t thank our staff enough and all the teachers and chaperones and people who make this possible. There is a ton that goes into it.”

Montana’s focus now goes strictly Division I after a hectic two-week stretch that went Maroon-Silver scrimmage, Lewis-Clark State, Carroll and MSU Northern, with hardly a chance to breathe in between, much less dig into the film and correct flaws in practice.

The Lady Griz won’t host Fresno State until Friday, Nov. 15, then remain home for games against Grand Canyon and Arizona.

“This will be a nice little break for us to really spend some time working on things we need to be better at,” said Schweyen.