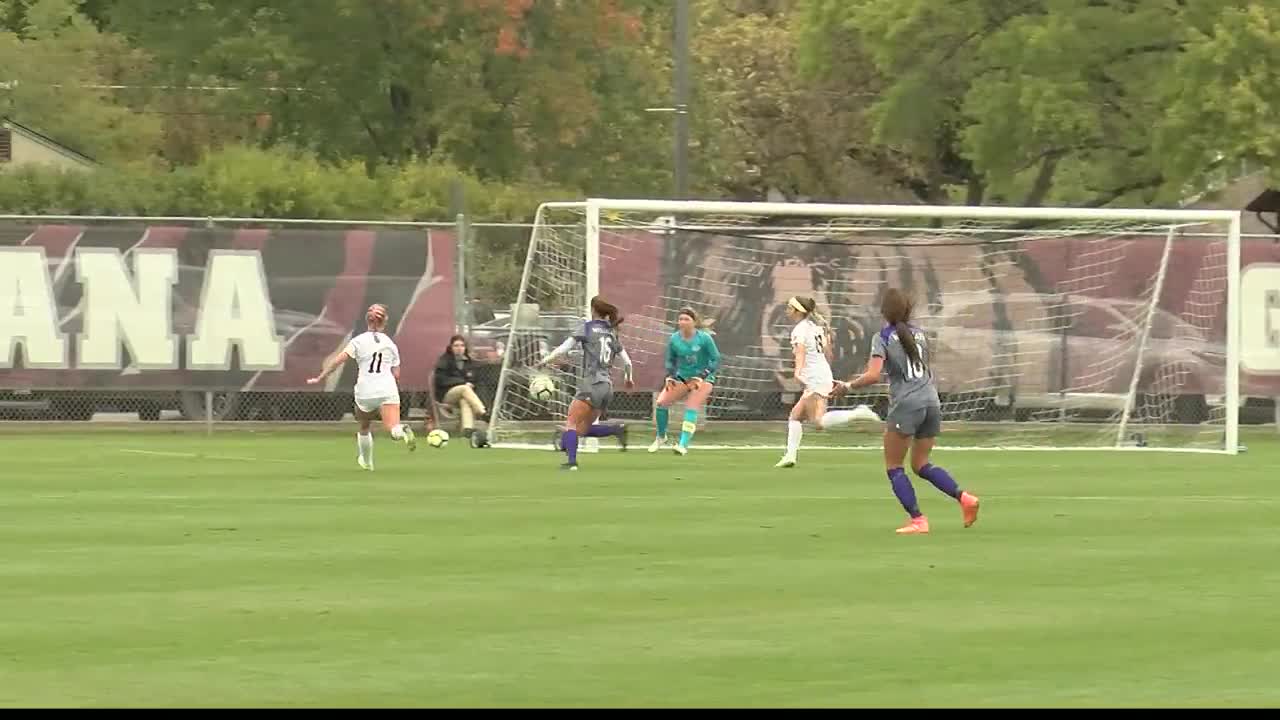 MISSOULA - The Montana soccer team remained unbeaten in league with a 1-0 victory over Weber State on Friday afternoon at South Campus Stadium in Missoula in the Grizzlies’ Big Sky home opener.

The only Big Sky team without a loss or tie spoiling its league record, Montana (3-5-3, 2-0-0 BSC) got a goal from Rita Lang in the 76th minute (assist: Taylor Hansen, the fifth of her career) and Claire Howard collected her 21st career shutout.

The teams combined for just seven shots in the first half and two corner kicks. So something had to be done to break a stalemate that wasn’t creating good looks at goal for either team.

The change came from Montana and got Lang her second career goal, her first in more than two years, when she went upper right corner off a bouncing ball. A goal-scorer’s goal.

“When we sat down at halftime, we said, We’ve got to do something different,” said coach Chris Citowicki.

“I enjoy being around people like (assistant coaches Katie Benz, J. Landham and Janessa Fowler), because the ideas flow. Credit J. for dropping the idea and getting it in my head. We made the change, and that’s what led to the goal.”

Opportunities picked up for both teams in the second half, more so for the Grizzlies, and they cashed in at 75:59, with Hansen getting the ball to Lang, who scored on a bouncing ball that most players would have sent high over the crossbar.

“Thank god that dropped to Rita. She’s the only one on our team that hits those consistently,” said Citowicki.

“The matchups were good across the board. They’re a good team. We’re a good team. It just came down to, is one of our players going to beat one of theirs? Or can we tactically change it up to overload them somewhere and score? That’s what we did.”

Lang’s only other goal as a Grizzly came on Sept. 10, 2017, in Montana’s 2-1 road win at Northern Iowa. She redshirted last season while overcoming a knee injury.

Yes, she scored against Mount Royal in an exhibition match in August, but that’s nothing compared to putting in the game-winner against one of your program’s fiercest conference rivals.

And to do so late in the match, from inside the box, with commotion all around?

“In that moment, with so much going on, I just try to tell myself to be calm and trust in my ability that I can find the back of the net,” Lang said. “We’re working well together. It’s starting to come together.”

If the offensive end of the field is starting to come together -- Montana has scored in back-to-back matches for only the second time this season -- the defensive end has been there all along.

Make that consecutive shutouts to open league and one or fewer goals allowed in 10 of 11 matches this fall.

“Our back line is super, super strong. I have 100 percent faith in them,” said Lang. “I have no doubt they have it on lockdown. They are all super solid. It’s very calming to know they are back there.”

The shutout was No. 21 for Howard in her career, which moves her into a tie for third in the Big Sky record book, eight away from matching the league standard of 29.

Of course no player competes on an island, and Howard is tied to the play of the back line in front of her. And no hole was more gaping entering the season than center back, where Taryn Miller had dominated for so long.

Into the void stepped freshman Allie Larsen early in the season. And Montana’s defense didn’t miss a beat.

“I think we’ve all become rally close and we all understand how everyone plays now, and we support each other,” she said. “I trust everyone next to me.”

All 985 minutes she’s played this season, second on the team to only Howard, have been a learning experience, all with the Big Sky’s best eraser behind her.

“That’s an added comfort. There is no other goalie like Claire. You know you’re safe when she’s back there. If you make a mistake, you know she’s going to cover for you.”

Next up for Montana: home on Sunday against Idaho State at 1 p.m.