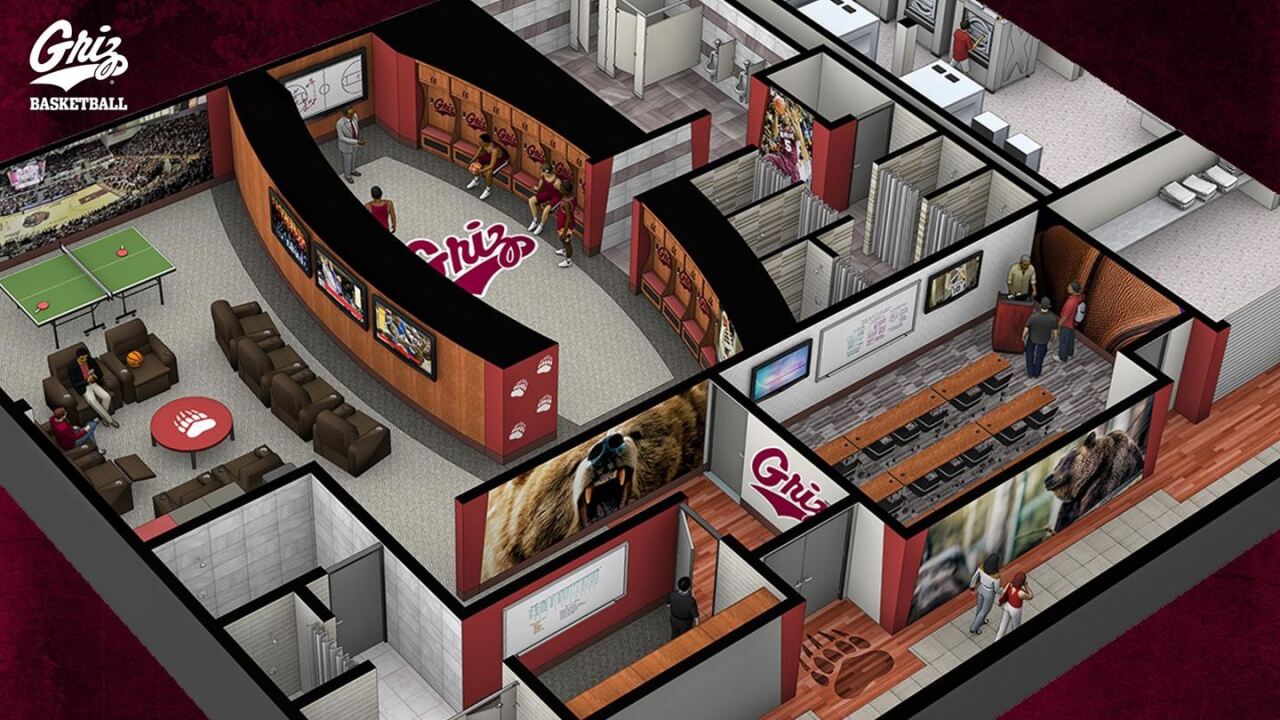 University of Montana
The Montana Men&#39;s Basketball program is set to undergo a facility upgrade for the 2020-21 season.

MISSOULA - On the heels of back-to-back Big Sky Conference championships and NCAA tournament appearances, the Montana men's basketball team is now in line for a major facilities upgrade. The program is set to receive not only a renovated locker room, but an expanded space that will feature a players' lounge, coaches' locker room and a team meeting room.

"We want to make sure we are doing projects that directly impact student-athlete success," Montana athletics director Kent Haslam said. "That success can be academically, socially or athletically, and this project is focused on that goal."

When Montana opened the doors to the Washington-Grizzly Champions Center in October 2017, the university's $14 million, 51,000 square-foot, state-of-the-art facility that includes a football locker room, team meeting rooms and a strength and conditioning center for all student-athletes, it also created a domino effect, which is providing the opportunity for the next phase of the athletics master plan.

The Washington-Grizzly Champions Center was considered Phase I of the facilities master plan, and when football moved out of its locker room and student-athletes began working out in their new, multi-level 20,000 square foot strength center, it left vacant real estate. The men's basketball locker room and lounge, as well as the equipment center, will occupy that area, expanding space for both departments.

The biggest change will simply be more space. The current locker room allows for the student-athletes to change and shower but little else. The renovation will nearly triple the team's area, expanding from approximately 1,200 square feet to 2,900 and provide a much-needed team meeting area.

Travis DeCuire sees it not only as a recruiting advantage, but one that will serve his current student-athletes.

"Our Griz family is growing, and we are grateful for their support," DeCuire said. "The lifestyle of a student-athlete is very important, and for us to continue elevating that is allowing us to compete at the highest level.

"This project is not just about recruiting, but the success of all of our student-athletes. As opposed to going home between classes, workouts, treatment and study hall, this new area will be a one-stop shop. There's more opportunity to stay in the building and spend time together as a team, which is huge for the success of the student-athlete."

Funding for the $2 million project will come entirely from private support. In June, the Montana Board of Regents approved the project, and now the department is in the process of selecting an architect. Construction on the project will begin in April, once basketball season is complete, and will be ready next fall in time for the 2020-21 basketball season.

Montana is in the home stretch of the fundraising campaign, and is nearly to its $2 million goal to complete the project. Even with great response, Montana is still looking for financial help to bridge the gap and stay on the timeline. Those interested in learning more about donating, including the opportunity to purchase a locker with your name on it, can contact Dan Ingram at (406) 243-6294.

"Every day I'm grateful for the people we have behind us," Haslam said. "We at Montana are in a unique situation where we have to raise the money to get things done, and our fans know that and they have always stepped up. I am so appreciative of our loyal supporters."

While Phase II will benefit the men's basketball program and the equipment staff – which serves all student-athletes – Phase III will allow for the athletics department to continue enhancing the overall experience for even more student-athletes. With the equipment center relocating, it will open up more space, which in the future will turn into a renovated Lady Griz locker room and lounge along with improvements for volleyball. Plus, new locker room facilities for many of Montana's Olympic sports.