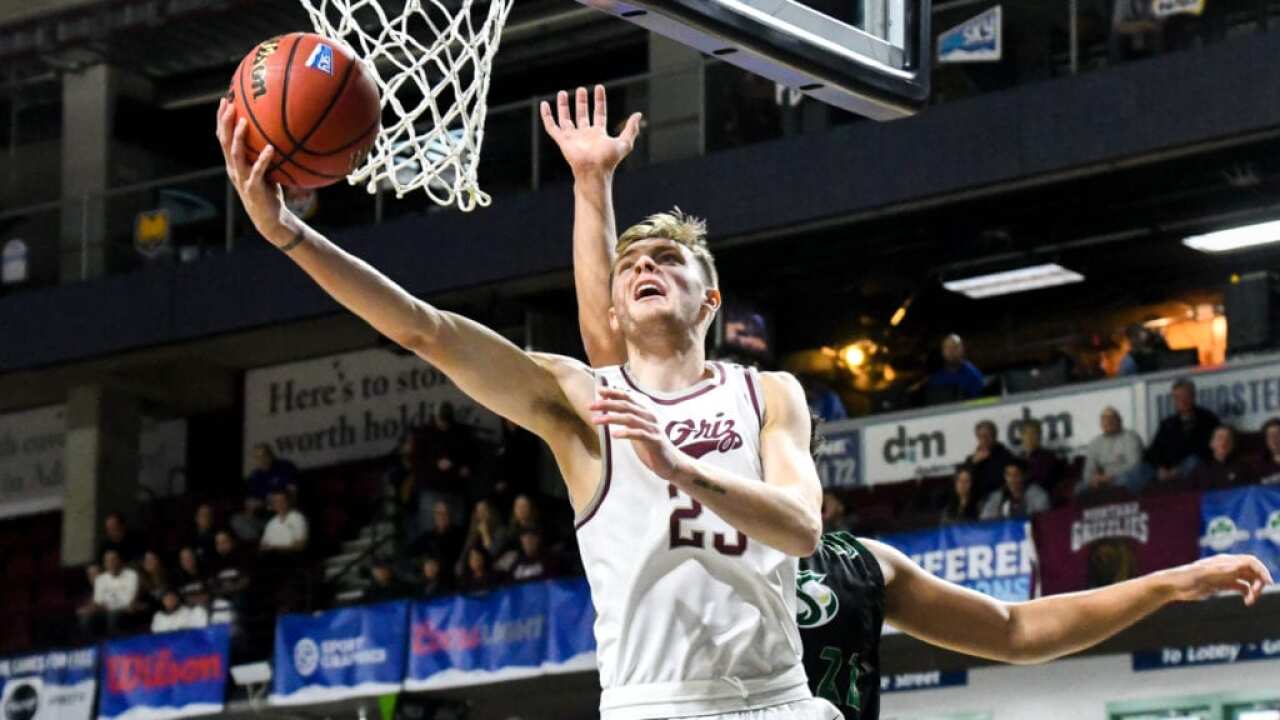 Montana’s Mack Anderson scores on a reverse layup against Sacramento State in the quarterfinal round of the Big Sky Conference men’s basketball tournament at Century Link Arena in Boise. (SLIM KIMMEL/MTN Sports)

MOSCOW, Idaho – A career performance from Mack Anderson erased a slow start for Montana, as the Grizzlies beat Idaho, 82-71, on Saturday night. The win maintains Montana's hold of first place in the Big Sky standings.

Anderson, who was saddled with early foul trouble, played just 2 minutes in the first half. The sophomore took full advantage in the second half, though, setting a career high with 15 on 6-of-8 shooting.

Montana led for less than 3 minutes in the first half, and trailed 45-43 with 15 minutes to play before Anderson took over. The Bozeman native scored 11 consecutive Griz points, including a personal 7-0 run in just 54 seconds which gave the Grizzlies the lead for good.

"When you're about the right things, things work out your way more often than not," head coach Travis DeCuire said about Anderson. "He's playing very well for us on the defensive end, his emotions are in the right place. He was doing the right things for us tonight, and he had a great game."

Prior to Anderson's outburst, the two teams were in a tight battle. The first 25 minutes featured 12 lead changes and nine ties, with neither team being able to lead by more than four points. That changed with a 15-2 run over 4 minutes of action, which turned a two-point deficit into a double-digit lead.

Idaho had one more counterpunch, with Trevon Allen scoring eight straight points to get back to within three, 58-55, but Montana once again responded with 11 of the next 15 points – shooting 5-of-7 from the floor during the stretch – to take full control.

Montana led for the final 15 minutes, including by as many as 12 points.

Both teams shot better than 50 percent from the floor, including .571 for the Grizzlies. Montana limited the Vandals to just 23 rebounds and forced 16 turnovers (26 points off of turnovers).

In addition to Anderson's 15 points on 6-of-8 shooting, three other Grizzlies were in double figures for scoring. Sayeed Pridgett scored 19 points, in addition to nine rebounds, while fellow senior Kendal Manuel scored 14. Freshman Josh Vazquez made all three of Montana's 3-pointers, finishing with 11 points – including several big shots and plays in the first half.