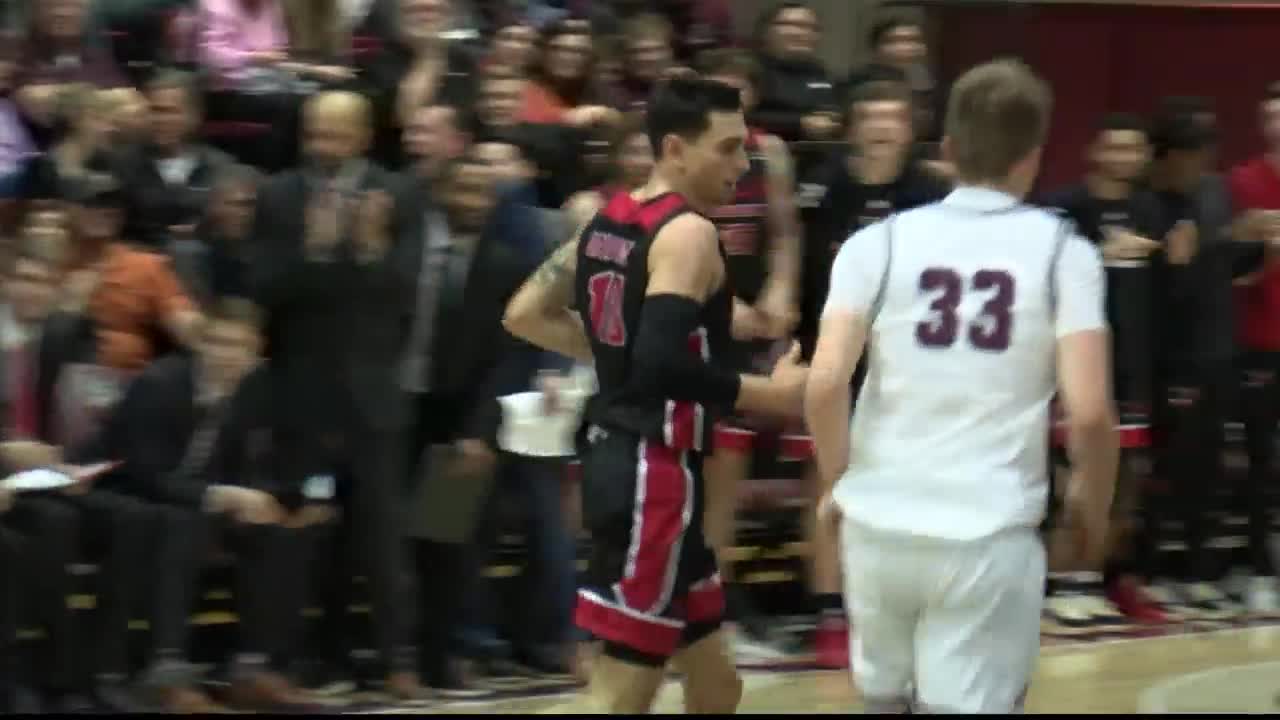 MISSOULA -- In a battle between the top two teams in the Big Sky Conference, the intensity inside Dahlberg Arena did not disappoint. Montana and Eastern Washington battled to another thrilling finish Thursday night, with the Grizzlies coming away victorious, 92-82, to earn the season sweep over the Eagles and jump them into first place in the league standings.

The game was physical from the start, but the Grizzlies were able to jump out to a 21-10 lead behind eight Eastern turnovers in the first 7 minutes. The Eagles regrouped and responded in a big way, however, using a 20-4 run to lead by as many as six points, including by one, 45-44 at halftime. The Eagles scored the first basket of the second half, as well, but that's when Montana once again took over.

Jared Samuelson connected on a jumper in the paint to cut the score to one, and a few moments later, Derrick-Carter Hollinger gave the Grizzlies the lead. Montana would go on to lead for the final 17 minutes, 20 seconds of the game.

"This is what it's about," head coach Travis DeCuire said. "It's not just about enjoying the preparation and enjoying the game and preparing for it, but also watching these young kids enjoy the moment because I don't know if there's any environment like college basketball, and I don't know if there's many environments on the West Coast better than this."

Following Eastern's jumper on its first possession of the second half, the Eagles missed eight of their next 10 shots. Meanwhile, Montana shot 5-of-7 during that span, allowing the Grizzlies to take a 61-54 advantage, capped with a big 3-pointer from Kendal Manuel.

The senior sharp-shooter missed six of his first seven shots, but got hot midway through the second half. He made three straight Griz baskets, including seven points during a 37-second span.

None, though, was bigger, than his four-point play, which featured a deep 3-pointer, followed by a made free throw after being hit on the shot. That gave Montana its largest lead of the night, 69-57, with 8:48 to play, capping a 25-10 Griz run.

The basket was big, but the game was far from over.

Despite leading by nine with under 2 minutes to play, Eastern made three straight shots to cut the Grizzlies' lead to two, 84-82, with 35 seconds on the clock.

Montana was clutch at the end, though, knocking down all eight free-throw attempts in the final 28 seconds. Overall, the Grizzlies made their final 14 foul shots in a chippy game that featured 55 combined fouls, including six technicals.

The final one was called on Eastern head coach Shantay Legans in the closing seconds, allowing Montana to ice the game and push its lead back to double figures. The 92 points scored were a season high, surpassing the 90 the Grizzlies scored last month at Eastern Washington.

"We knew it would be physical. It always is with them," DeCuire said. "But I thought we did a good job of not losing composure as a unit."

Eastern Washington, which ranks sixth nationally for scoring offense, was good, making 54 percent of its shot attempts, including 42 percent (8-of-19) from deep. The Grizzlies were also efficient offensively, making more than half of their shots, including a season-high 60 percent from long range (9-of-15).

Montana was led by Sayeed Pridgett, who scored 24 points for the second game in a row. At one point in the second half, he scored eight straight Griz points to extend Montana's lead and pass Griz great Wayne Tinkle on the all-time scoring list. Pridgett is now in ninth place, with 1,511 points.

Joining Pridgett in double figures was Manuel, who scored 16 of his 18 points in the second half, in addition to Timmy Falls (11 points) and Mack Anderson (10). Pridgett, Manuel and Falls all had four assists, as well.

Quoting DeCuire
(on the team's start)
"Our guys knew they were playing for a lot. They seemed a little mellow in the locker room, so I was a little concerned, but they got off to a good start and were focused. We got stops (early). They had one thing, and that was (Jacob) Davison putting his head down and getting to the rim. He was hard to guard, but we got him contained enough to force him into some bad shots, and we got on a roll."

(on playing through fouls)
"We had to decide who we can play with two fouls and win. That's when they made their run, when some of our top guys were out. In the second half we were able to play those guys a little more, and we grinded it out."

(on Eastern always staying within striking distance)
"There's a lot of things that kept us from grasping control when we thought we had it. Little things kept us from stretching out our lead. They didn't make it easy on us, but I'm proud of how we finished."

(on Pridgett taking over in big moments)
"They kept changing the matchup, so we had to keep adjusting as well. He's been ready to play and he's come through a lot. He's been as reliable as anyone I've ever had."

Looking Ahead
Montana is now in first place in the Big Sky standings, a half-game ahead of Eastern Washington and Northern Colorado. The Bears earned a big road win at Southern Utah on Thursday to move into a second-place tie. Montana will now go on the road to play at Idaho (Saturday, 7:30 p.m. MT), before returning home for back-to-back games inside Dahlberg Arena next week.