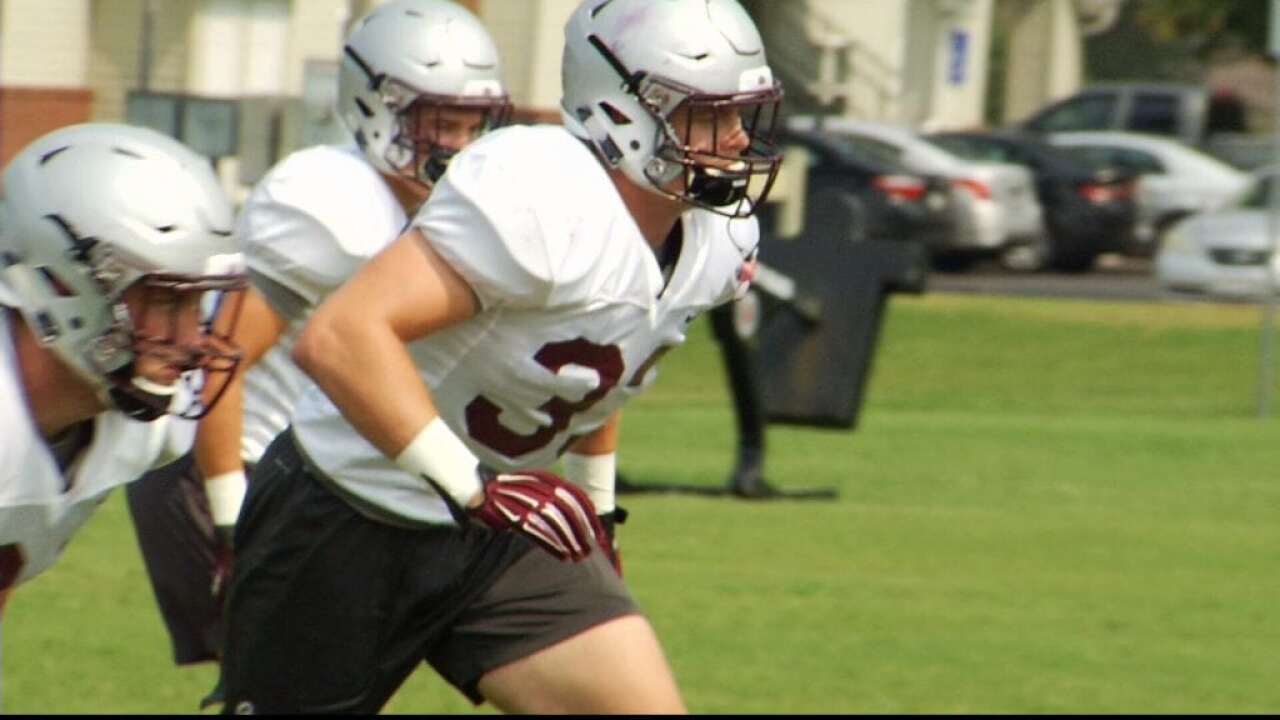 Dante Olson moves into a starting linebacker position for the first time this season at Montana (MTN Sports photo).

MISSOULA -- As a finalist for the Buck Buchanan Award and the NCAA statistical champion for tackles per game last season, Montana All-America linebacker Dante Olson earned plenty of national recognition his record-setting efforts on the field.

Now the senior is receiving national recognition for his efforts off the field from the American Football Coaches Association as a member of the 27th annual Allstate AFCA Good Works Team.

On Thursday, the AFCA announced that Olson is one of just 22 student-athletes from all levels of college football (FBS, FCS, D-II, D-III, and NAIA) to earn a place on the team that honors their leadership in local communities and overall commitment to giving back. The prestigious list was narrowed from a list of 137 nominees by an esteemed panel of judges, including Kirk Herbstreit (ESPN) and Tim Tebow (Florida, 2009 team). The Honorary Head Coach of the Good Works Team is Dabo Swinney of the National Champion Clemson Tigers.

For more than a year, Olson has served as a mentor and pen-pal with a class of underprivileged third graders at Gerber Elementary in Northern California farm country, encouraging them to pursue a college education as part of the "No Excuses University" program.

Since inheriting the program from former Grizzly Cooper Sprunk, Olson has spent time regularly Skyping with the class, exchanging letters, answering questions about college life and providing a positive message of encouragement. In the summer of 2018, he even took it upon himself to travel to California to meet the kids, spend time with them, and use his story to impact their lives for the better through higher education.

The relationship will come full circle on Sept. 28 when the kids from Gerber travel to watch Olson and the Grizzlies play at UC Davis following a hugely successful fundraising drive to help get them there.

During his time at Montana, Olson has also served as an anti-bullying advocate and helped save lives when the Grizzlies participated in a campus-wide "Be the Match" bone marrow registry drive.

In the classroom, Olson is the model student. He was named to the FCS Athletic Director's Association Academic All-Star Team in 2018, is a three-time Academic All-Big Sky Conference selection, and maintains a 3.9 cumulative GPA with four different semesters with a 4.0. He also earned Montana's nomination for the William V. Campbell Trophy this season.

All this on top of posting the most tackles in all of Division-I football as a junior, earning a place on seven-different All-America lists, and being the only FCS player named to the preseason watchlist for the Butkus Award for the nation's best linebacker entering his senior year.

"He's a terrific student, he's a great player, and he's an outstanding person. He's a giving and caring individual that is willing to do anything to help both his team on the field and others off of it."

Olson is the latest of seven Grizzlies in program history to earn a place on the Good Works Team, with Colin Dow being UM's last member in 2008 for his work with disabled kids and several Montana charity organizations. Former Grizzly stars Lex Hilliard (2007), Colt Palmer (2004), John Edwards (2002), Calvin Coleman (2001), and Dallas Neil (1998) have also been recognized for their work in the community with a place on the team.

"We've been doing things in Grizzly football that benefit kids for a long time," said Hauck, pointing to the team's annual holiday toy drive as an example.

Fans are invited to visit ESPN.com/Allstate to see team bios and vote for the 2019 Allstate AFCA Good Works Team captain once per day, now through Nov. 22. The team captain will be honored at The Home Depot College Football Awards on ESPN later this season.

The Allstate AFCA Good Works Team was established in 1992, by the College Football Association, to recognize extra efforts by players and student support staff off the field. AFCA became the governing body of the award in 1997 and continues to honor players who go the extra mile for those in need. Allstate became the presenting sponsor starting with the 2008 season.