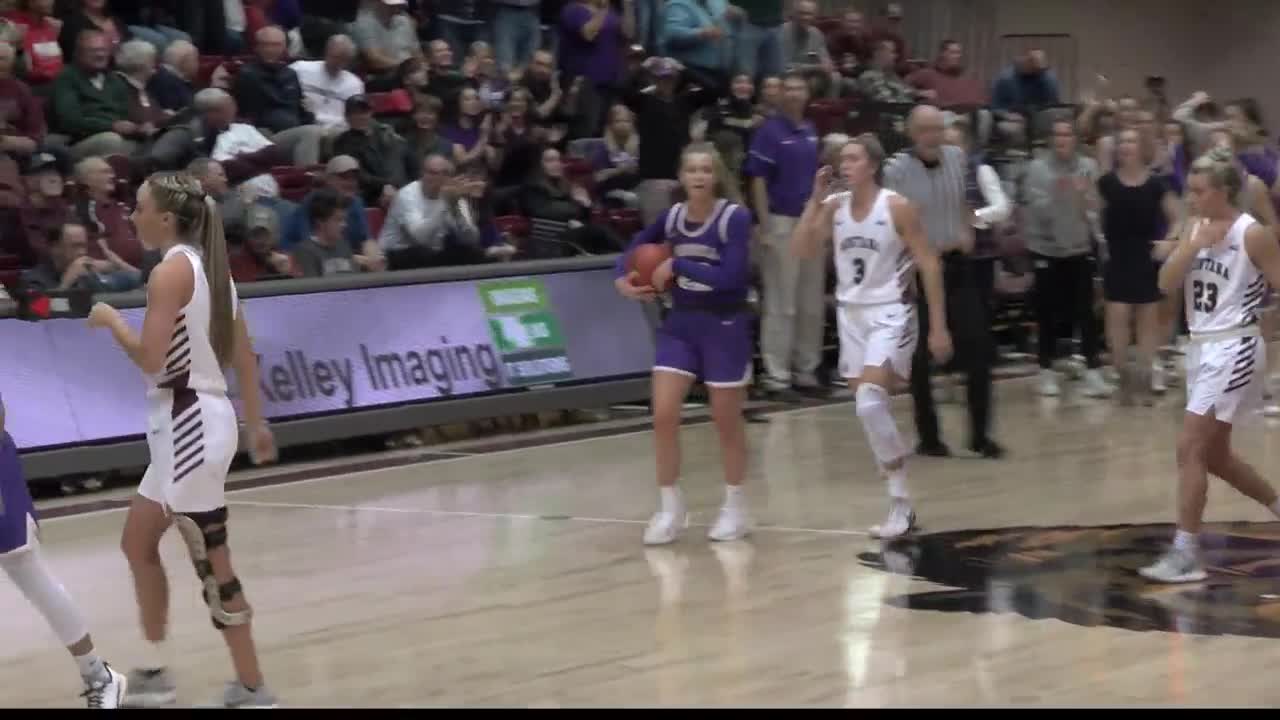 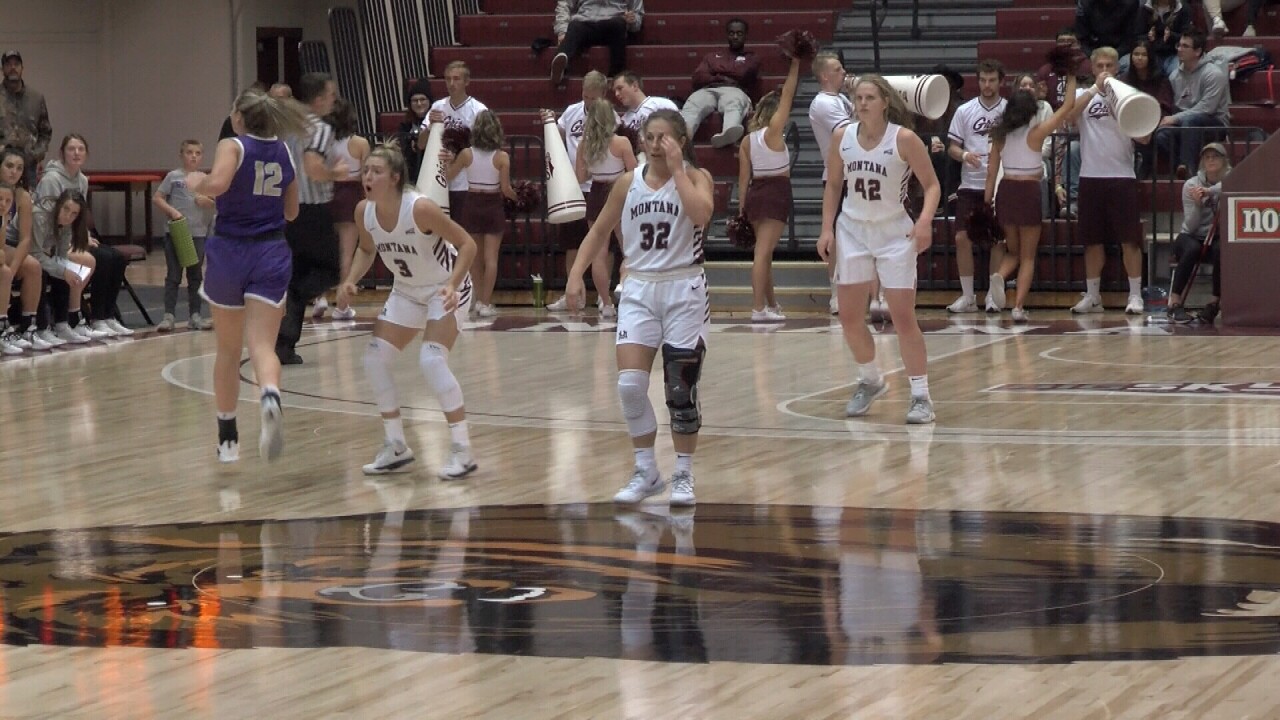 MISSOULA - It was the kind of moment made for a fifth-year senior, one who probably took the same shot hundreds of times over the summer inside Dahlberg Arena, thousands of times on different courts in her lifetime.

The game on the line, the other team sensing victory, everyone looking to Taylor Goligoski to save the day.

And she did on Tuesday night, hitting the biggest shot of the game, a 3-pointer with 40 seconds left in regulation with her team trailing by three and quite possibly on its way to an exhibition loss to Carroll.

The shot changed Montana’s fortunes and sparked the Lady Griz to a 74-70 overtime victory over the Saints in a back-and-forth game that featured 10 lead changes.

“I just knew that was our one shot, that if I didn’t make that one three, we were probably going to lose the game,” said Goligoski. “I knew I had to knock it down, so I shot it with confidence and it went in.”

It was a game fourth-year coach Shannon Schweyen wasn’t surprised to see go down to the wire. Carroll has veteran experience, particularly at the guard, and two Division I dropdowns who started on Tuesday.

The Saints were unfazed from the start and led 22-14 after the first quarter thanks to an 11-0 run.

They went 10 for 17 the first 10 minutes, while the Lady Griz were shooting 36 percent and turning it over four times.

They are who Schweyen thought they were.

“This is a good basketball team,” she said. “We talked about them being good defensively. One of our points in pregame was that we’re probably not going to be getting stuff on the first side against these guys.

“I didn’t think we had much patience at all. That was the big key. We kept taking shots early without moving the ball and getting it reversed. Against a team like that, you’re not going to get good things right away.”

If the opening period belonged to Carroll, the second quarter was owned by Montana. The Lady Griz shot 55.6 percent and scored 25 points, with an 11-1 start to the period leading to a 39-34 halftime lead.

But any momentum Montana carried into the locker room was left behind.

The Lady Griz had two turnovers before the third quarter was 30 seconds in and needed more than three minutes to score their first points of the second half.

By then it was game on.

Carroll used Montana’s slow start to take the lead, and the Lady Griz wouldn’t regain it until late in the fourth quarter. The largest lead for the Lady Griz the entire game was five points.

“We talked at halftime about here’s what we’re going to do when we come out,” said Schweyen. “We want to have patience and run this and this.

Christine Denny, Carroll’s junior guard, nearly led her team to the victory, scoring 10 points in the second half, most in the paint, where the Saints had a 30-24 advantage for the game.

“They’ve got girls who can take you down low and shoot over you, and they hit three or four late-count threes at the buzzer,” said Schweyen.

“We need to be a lot more physical in the post. That was an area we struggled as well. They did a nice job being physical with us down there.”

Montana went just 6 for 23 from the arc on the night, which almost cost it the game. But the Lady Griz also wouldn’t have won without the three ball.

With her team trailing 59-58 with under four minutes to play, Gabi Harrington, who finished with 16 points, hit her own shot of the night, a 3-pointer from right in front of Montana’s bench.

It was Montana’s first lead since early in the third quarter, and it wouldn’t last long.

Danielle Wagner answered with a three, and Denny put her team up 63-60 with a twisting shot in the paint.

It was 65-62 after Carroll scored with 50 seconds remaining, which left it up to Goligoski to put it all on her shoulders.

“Taylor was huge for us hitting those threes,” said Schweyen, hinting at the three Goligoski would hit early in the overtime period to get Montana going in the extra session.

Denny missed an in-and-out leaner in the paint with 28 seconds left in regulation, which gave Montana the opportunity to win it.

Schweyen cleared out the side for McKenzie Johnston, putting the outcome in the hands of her fifth-year point guard.

And why not? Johnston would finish the night with 19 points, eight assists and seven rebounds. But her late spin dribble into traffic led to a turnover, which led to overtime.

“Kenzie was hopefully going to go put some pressure on them,” said Schweyen. “We had some spacing for her. Oh well, that happens.

“At least we ended up pulling it out. You hope in games like that you’re eventually going to come around. It took us a while to get going at the end.”

Goligoski hit her 3-pointer 70 seconds into overtime, and Carroll would not lead again.

Johnston put Montana up 72-68, Harrington hit one of two free throws with 1:24 to go to make it 73-68, and the Lady Griz did enough in the final minute to hold on for the win.

“I was impressed with them defensively for sure,” said Schweyen. “Their help’s good, they’re quick, they’re smart.

“You want to be tested in your exhibition games and see different things. We’re still learning about this team, so this was a good test for us.”

Emma Stockholm, who scored seven points during Montana’s second-quarter surge, finished with 14 before fouling out late in regulation.

Montana will open the regular season against MSU Northern on Tuesday, Nov. 5, at 11:30 a.m. in the third annual Lady Griz School Day game.

“It’s early in the season, and Carroll is a really good team,” said Goligoski. “It was a good game to get us going and wake us up and get us started with this new season.”