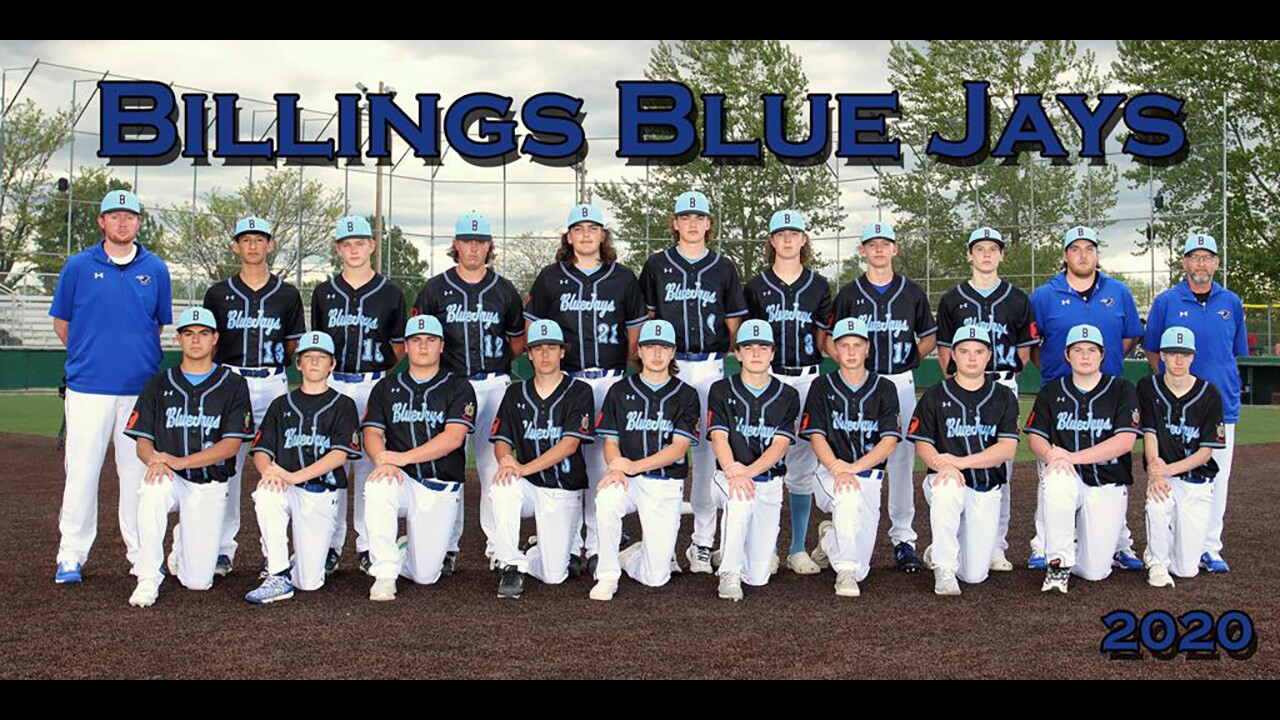 LEWISTOWN -- The Billings Blue Jays clinched a spot in the championship game of the Class A Montana Legion Baseball state tournament with a 17-5 win over the Lewistown Redbirds at Ryan Sparks Field on Saturday. The Gallatin Valley Outlaws and Bitterroot Bucs also won loser-out games on Saturday.

The Billings Blue Jays scored eight runs in the first inning and seven in the second as they cruised to a 17-5 win over Lewistown in the semifinal round of the Class A Montana Legion Baseball state tournament on Saturday.

Lewistown actually got on the board first with one run in the top of the first inning, but the Blue Jays showed patience at the plate in the first and second innings to blow the game open. Davis Mosier started the onslaught when he doubled to score two runs for Billings. He came around to score three batters later on a Sy Waldron single.

From there, Billings added five more runs in the first -- one on a hit-by-pitch, three on bases-loaded walks and one on a wild pitch -- and seven in the second, including one on a passed ball and one on another bases-loaded walk. Lance Schaaf ground into a fielder's choice to score one run, Jessen West hit an RBI single, and Kruz Slevira and Bryce LaForest each added two-RBI doubles in the inning.

The Blue Jays made life tough on the Lewistown pitchers throughout, tallying 15 walks and nine hits in the game. Only two Blue Jays struck out as nine different players recorded hits or walks. Mosier, who also pitched all five innings for Billings, led the way at the plate, going 2-for-2 with two walks, five RBI and two runs. West, Slevira and LaForest each added two RBI in the win, while Austin Schaaf and Lance Schaaf each scored three runs. Mosier, Gunner Thompson, LaForest and Samuel McCoy each scored two runs.

Jake Clinton had a solid day at the plate for Lewistown, going 3-for-3 with three runs scored.

With the win, the Blue Jays advanced to the championship game, which is scheduled to start at 1 p.m. Sunday. The Redbirds, meanwhile, will play the Gallatin Valley Outlaws in the third-place game at 10 a.m. Sunday.

Gallatin Valley defeated the Bitterroot Bucs in a late loser-out game Saturday after both teams won loser-out games earlier in the day to keep their seasons alive.

Cyrus Richardson singled to right field in the bottom of the ninth inning to score Trevor Doud and help the Gallatin Valley Outlaws to an 11-10 walk-off win over the Bitterroot Bucs at the Class A Montana Legion Baseball state tournament on Saturday.

The Outlaws and Bucs, who both won earlier loser-out games Saturday to set up the nightcap, traded blows in the back-and-forth nine-inning contest. Gallatin Valley scored in each of the first three innings to take a 5-3 lead, but the Bucs, after scoring three runs of their own in the third, scored four runs in the fourth and one in the fifth to take an 8-5 lead. Gallatin Valley added three runs in the bottom of the sixth, though, to tie the game at 8-8 and force extra innings.

Bitterroot struck first in extras. With a runner on, Zack Christopherson sailed a home run over the right-field fence to give the Bucs a 10-8 advantage. Bitterroot loaded the bases after Christopherson's home run, but Gallatin Valley pitcher Bo Hays got three consecutive outs to end the inning and keep his team within striking distance.

It didn't take the Outlaws long to get to work in the bottom of the eighth. Three consecutive singles brought Josh Wisecarver across, and Hays later scored on an error to tie the game at 10-10.

The game remained tied into the bottom of the ninth, setting up Richardson's heroics. Doud got on first base on a Bitterroot error and then advanced to second on a Wisecarver bunt. Richardson's single brought Doud home and ultimately kept the Outlaws' season alive. Gallatin Valley will next play Lewistown in the third-place game at 10 a.m. Sunday. The Gallatin Valley/Lewistown winner will meet the Billings Blue Jays in the championship game.

Richardson's monster night included a 5-for-6 performance at the plate. He had three RBI and scored two runs to pace the Outlaws, who also got multiple hits from Wisecarver (3-for-5 with three runs scored), Hays (2-for-6 with one run scored) and Brody Ayers (2-for-5 with two RBI and one run scored). Ayers was credited with the win on the mound after getting the final out for the Outlaws. Patrick Dietz, Isaac Richardson and Hays combined to pitch 8.2 innings and struck out 13 Bitterroot batters

The Bucs, who saw their season end with the loss, had five errors in the game which resulted in four Gallatin Valley runs. Bitterroot pitchers Treven Mertins, Zale Bender and Brendan Schneiter combined to allow 15 hits, seven walks and seven earned runs.

After digging a 2-0 hole in the first inning, the Gallatin Valley Outlaws rallied for a 6-2 win over Belgrade in loser-out action Saturday at the Class A Montana Legion Baseball state tournament.

Belgrade, which defeated Gallatin Valley for the Southern A district championship last week, put two runs on the board in the bottom of the first when Cole Thomas and Lane Neill crossed the plate. Gallatin Valley pitcher Caleb Kamerman settled in, though, and didn't allow another Bandit run the rest of the way. Kamerman struck out five in seven innings of work.

The Outlaws' offense struggled against Belgrade pitcher Coby Richards, who struck out eight batters and only gave up three hits and two walks in 5.1 innigs. In the fifth inning, though, Josh Wisecarver drew a walk to get on base and then scored on a Bo Hays single. Brandon Beedie drove in the game-tying run in the sixth when his single brought Isaac Richardson home.

Isaac Richardson and Beedie each had two hits on the day, while Doud and Wisecarver each drew two walks. Doud, Wisecarver, Hays, Ayers and Beedie were each credited with one RBI.

Like Gallatin Valley before them, the Bitterroot Bucs got revenge on Saturday.

After losing to Glacier in the Western A district championship last week, Bitterroot rallied for a 5-3 win over the Twins in a loser-out game at the Class A Montana Legion Baseball state tournament.

The Bucs took a 1-0 lead in the top of the second inning when Zack Christopherson, who went 1-for-2 on the day with two walks and two runs, scored on a Blake Hinsdale groundout, but Glacier would steal the lead with a three-run fourth inning. Trenton Tyree knocked in Cade Morgan to tie the game, then Payton Davisson scored on a wild pitch to give the Twins the lead. Tyree would later score on a Mason Peters flyout to give Glacier a 3-1 lead after four.

Bitterroot's Jake Scully changed the game on one swing in the fifth, though. His bases-loaded double scored three to put the Bucs back in front 4-3. An Andrew Scully flyout brought in an insurance run in the top of the sixth.

The Bucs were limited to six hits in the game, but they got three RBI from Jake Scully, who also pitched six innings, striking out six and allowing three Glacier runs.