Who belongs on the Mount Rushmore of Montana sports? 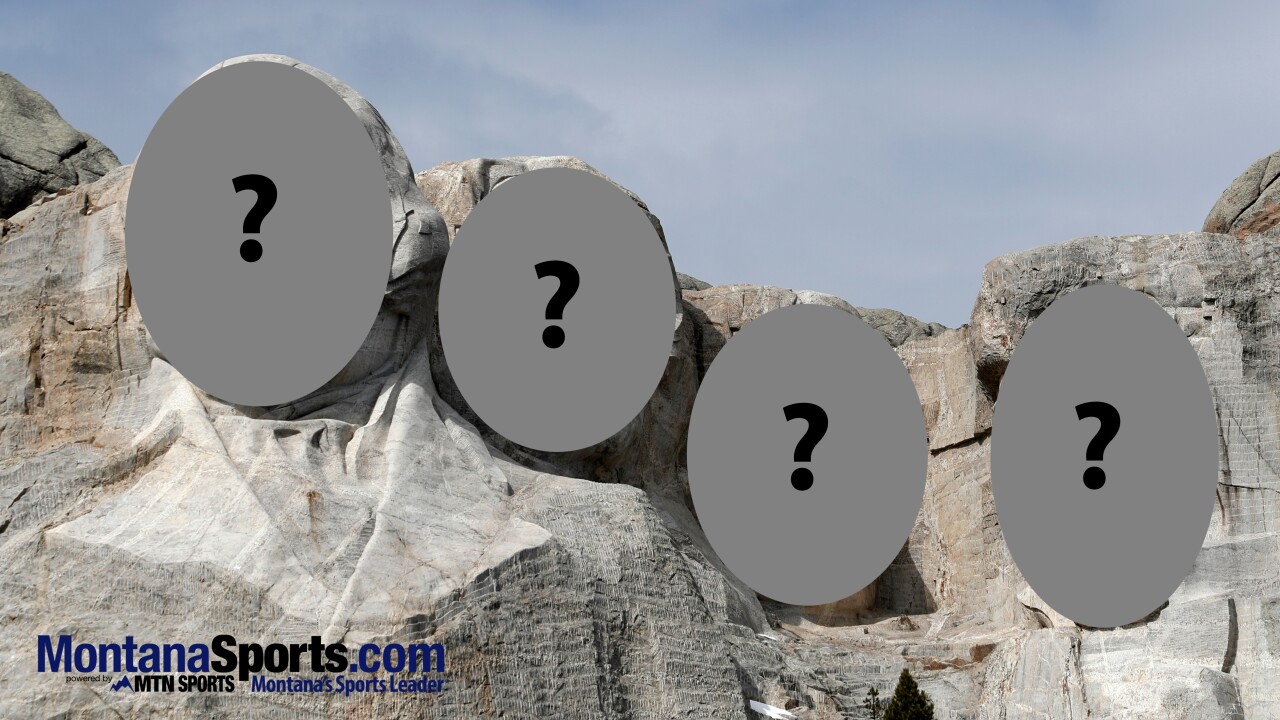 AP Image
Who are the four biggest sports figures in Montana history?

Who are the four biggest sports figures in Montana history?

It seems like an impossible task to narrow the list to determine a Mount Rushmore of Montana sports, especially given how wide the criteria can be. Should people like Dennis Erickson or Jud Heathcote be atop the Montana mountain, even though much of their sports résumés were built outside of the Treasure State? Or should legendary high school coaches like Jack Johnson or Jim Street be canonized? What about athletes like Elvis Old Bull, Brock Osweiler or Marc Mariani, who had varying degrees of success among their moments of fame?

The list might look differently in five, 10 or 20 years as athletes like Jess Lockwood, who has already won two PBR world championships, continue their careers. Lockwood is certainly trending toward becoming one of the most-decorated athletes in Montana history, but his legacy hasn't yet withstood the test of time like the candidates outlined below.

We’ve narrowed the list, selecting the male figures we thought were necessary inclusions in the retelling of Montana’s sports history (we’ll vote on female candidates later), but we’re leaving the final four up to you. Read highlights on each male candidate below and click here to cast your vote for the individual you believe undoubtedly belongs on the Mount Rushmore of Montana sports. If you wish to cast a vote for somebody not included in this poll, please email sports@ktvh.com.

Marvin Camel -- From Ronan, Camel became the World Boxing Council (WBC) cruiserweight champion in 1980 by defeating Mate Parlov. He later won the International Boxing Federation (IBF) cruiserweight title with a win over Roddy MacDonald in 1983 to become the first boxer to be named cruiserweight champion by two different bodies. Camel finished his career with a record of 45 wins, 13 losses and four draws.

Gene Davis -- Missoula's Davis is one of the greatest wrestlers in Montana history. He was the state's first four-time high school state champion and later became a three-time all-American at Oklahoma State, winning an NCAA championship in 1966. Davis claimed a bronze medal in freestyle wrestling at the 1976 Olympics, and he is still the only Montanan to win an Olympic medal in the sport.

Dave Dickenson -- After helping Great Falls CMR to two Class AA state football championships, Dickenson quarterbacked the Montana Grizzlies to the 1995 NCAA Division I-AA national championship and won the Walter Payton Award. He's won five Grey Cups (three as a player and two as a coach) in the Canadian Football League and was the league's most outstanding player in 2000. Dickenson was inducted into the Canadian Football Hall of Fame in 2015 and the College Football Hall of Fame in 2018.

Pat Donovan -- Donovan is one of the most decorated football players in Montana history. After an all-state career at Helena High School, Donovan became a first-team all-American at Stanford and four-time Pro Bowler in the NFL with the Dallas Cowboys. He played in three Super Bowls, winning a ring in Super Bowl XII.

Dennis Erickson -- Erickson, who was raised in Washington, became an all-conference quarterback at Montana State, but he's in the College Football Hall of Fame because of his coaching career, which also started with the Bobcats. Erickson coached at Billings Central Catholic High School for one season before returning to Bozeman. After three years on MSU's staff, Erickson moved on to Idaho. After a number of stops, his college coaching career reached its pinnacle in the late 1980s and 1990s, when he won two national championships as the head coach at the University of Miami.

Wayne Estes -- A three-sport standout at Anaconda, Estes played college basketball at Utah State, becoming one of the best players in the country. He was an all-American forward with the Aggies, finishing his career with 2,001 points and 893 rebounds. Estes was reportedly set to be a high NBA draft pick in 1965, but he was fatally electrocuted by a downed power line.

Sonny Holland -- The all-time greatest Bobcat, Holland arrived at Montana State after a three-sport career at Butte High School in the 1950s. As a center and linebacker, Holland helped MSU to the 1956 NAIA national championship and became a three-time all-American. After his playing days, Holland took to coaching and became the Bobcats' head coach in 1970. He guided the team to six consecutive winning seasons, including the 1976 national championship.

Phil Jackson -- Jackson, who has won the most NBA championships in basketball history, was born in Deer Lodge and spent his formative years in Montana. He played high school and college basketball in North Dakota and then spent 12 years as a player in the NBA, winning his first two titles. As a coach, Jackson compiled a career record of 1,155 wins and 485 losses and won 11 NBA championships, six with the Chicago Bulls and five with the Los Angeles Lakers.

Sam Jankovich -- A native of Butte, Jankovich played college football at the University of Montana before getting into coaching. He won two state championships at Butte High and then became an assistant at Montana State. He left coaching in 1972 and got into administration, ultimately becoming the athletic director at Washington State and then the University of Miami. He also spent two seasons as the CEO of the New England Patriots.

Robert Craig "Evel" Knievel -- A Butte native, Knievel became one of the biggest celebrities in the United States in the late 1960s and 1970s as a motorcycle stuntman. In 1975, he completed his longest successful jump, clearing 14 Greyhound buses (133 feet), at Kings Island near Cincinnati, Ohio.

Larry Krystkowiak -- Krystkowiak is one of the best basketball players in Montana history, setting the Grizzlies' school records in career points (2,017) and rebounds (1,105) and becoming the only three-time Big Sky Conference MVP in league history. After a nine-year playing career in the NBA, Krystkowiak has been a coach since 1998, spending the past nine years as the head coach at the University of Utah.

Mike Lewis -- One of the greatest basketball players in Montana history, Lewis helped Missoula Sentinel High School to a 56-game win streak in the 1960s. He continued his career at Duke, compiling 1,417 points and 1,051 points during his career. Lewis played professionally in the ABA for six seasons, including an all-star season in 1970-71.

Dave McNally -- Born in Billings in 1942, McNally is the best baseball player in Montana history. The left-handed pitcher played in Major League Baseball from 1962-75, spending the majority of his career with the Baltimore Orioles. McNally was a three-time all-star and two-time World Series champion and is a member of the Orioles' Hall of Fame.

Dan Mortensen -- A Billings native and Senior High School graduate, Mortensen went on to win six world saddle bronc championships at the National Finals Rodeo, tied for the most in PRCA history. He won the world all-around title in 1997 and was inducted into the ProRodeo Hall of Fame in 2009.

Brent Musburger -- Musburger, who was raised in Billings, is one of the most recognizable voices in sports broadcasting. After 17 years with CBS and 27 with ABC and ESPN, Musburger launched Vegas Stats & Information Network, a network dedicated to sports gambling information.

Flint Rasmussen -- Rasmussen, who grew up in Choteau, is the most famous rodeo clown in the sport, winning eight consecutive clown of the year awards in the Professional Rodeo Cowboys Association (PRCA). He worked his first Wrangler National Finals Rodeo in 1998 and in 2005 signed a contract with the Professional Bull Riders (PBR), where he's become one of the faces of the organization.

Robin Selvig -- A fine basketball player at Outlook and the University of Montana, Selvig ultimately became one of the winningest women's basketball coaches in NCAA history. He coached the Montana Lady Griz for 38 years, compiling 865 career wins and guiding the team to 21 NCAA Tournament appearances.

Jan Stenerud -- Originally from Norway, Stenerud landed in the United States on a ski jumping scholarship at Montana State. He later joined the Bobcats' football team and became an all-American in both sports. The Kansas City Chiefs drafted Stenerud in 1967, and he played professional football until 1985, finishing his career as a Super Bowl champion, four-time Pro Bowl selection and six-time all-Pro (four first teams, two second teams). He was enshrined in the Pro Football Hall of Fame in 1991 and has been selected to the NFL's 75th and 100th anniversary all-time teams.

Lones Wigger -- A Great Falls native, Wigger is considered one of the best competitive rifle shooters in American history. He won 58 national championships and claimed two gold medals and one silver medal while competing on the U.S. Olympic shooting team.

Bill Zadick -- A four-time state wrestling champion at Great Falls High, Zadick went on to win an NCAA Division I national championship at Iowa and a gold medal at the 2006 World Championships in freestyle wrestling. He has been the head coach of the United States Senior Freestyle team since 2016.