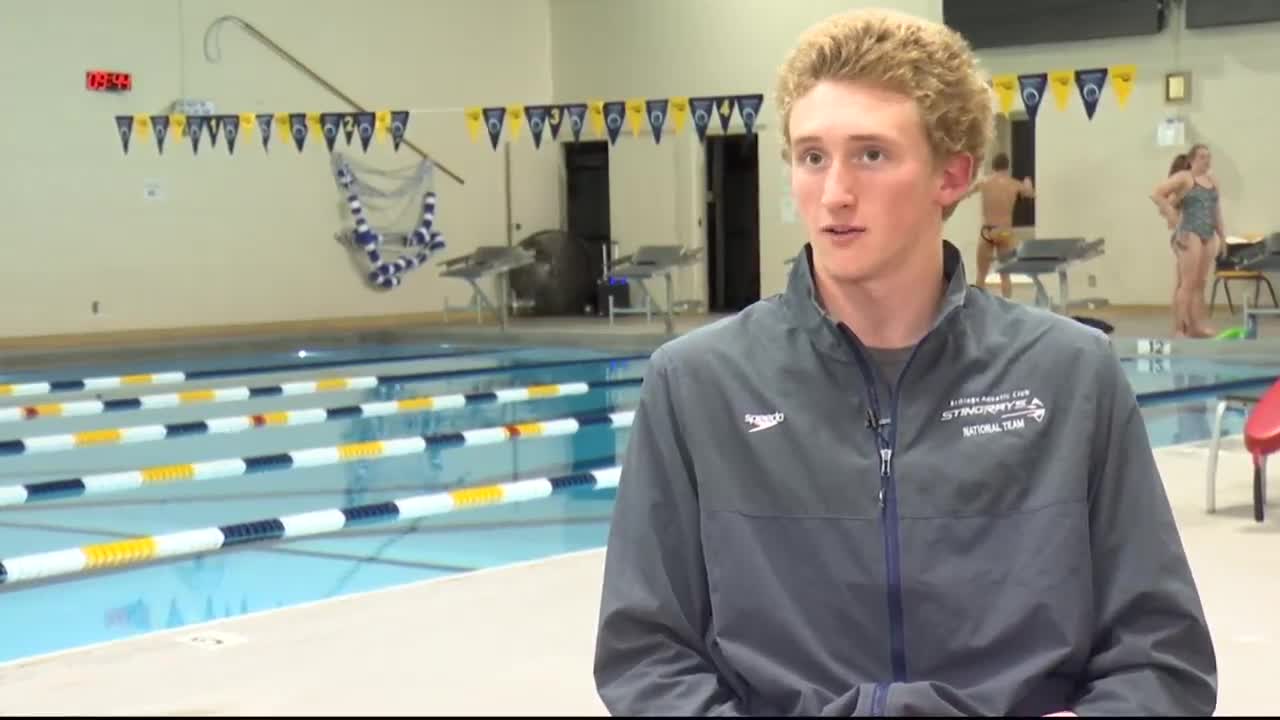 BILLINGS -- Peter Thompson's office is hot and humid. Well, if you want to call it an office. Thompson is only 17 years old, but the Fortin Center swimming pool at Rocky Mountain College is where he does his work.

"On average, he's in the pool about nine times a week," Billings Aquatic Club swim coach Sean Marshall told MTN Sports. "Two hours at night, an hour and a half in the morning, and then he has weight workouts, too."

That dedication has earned Thompson the 2019 National Congress of State Games Male Youth Athlete of the Year Award, which he accepts Tuesday in Anaheim. He's the fourth straight Montanan to earn a national award from the NCSG.

Thompson has a wide variety of pool memories, some of his earliest at the Big Sky State Games.

"I would say the first kind of competitive swimming I did was in the triathlon through the State Games," Thompson told MTN Sports on Rocky's pool deck before a recent workout.

He remembers catching his first glimpse of competitive swimming while his sister competed at the aforementioned Fortin Center pool.

"She was in the State Games here and I actually walked over from our house and just kind of fell in love with the atmosphere and the feeling of it," he recalled. "And I think within the next month, I was on deck swimming, also."

And now here he is, the country's NCSG Male Youth Athlete of the Year.

Thompson's ascent is one of the quickest Marshall remembers witnessing as a coach.

"It's been kind of a meteoric rise to where he's jumped onto the page and made (the Olympic) Trials, made a USA Swimming National Junior team. So, a lot of opportunities have kind of opened up the door just by the hard work he's put in with a lot of the group behind me and kind of what he's done," Marshall said.

Next summer's Olympic Trials are in June, and Thompson admits that qualifying surprised even him.

'Then' was at last summer's USA Swimming Junior Nationals in Palo Alto, Calif.

"Atmosphere at those higher level events is just indescribable," Thompson said. "The tension and nerves on deck. You just kind of have to separate yourself."

Outside the pool, Thompson says he likes science and hopes for a medical career. Marshall says he already has interest, both academically and athletically, from some major universities.

Though anything seems possible, Thompson says his realistic swimming goal is reaching the 2024 Olympic Team -- not necessarily a vision he had when he made his first splash at a young age. And only part of the reason he's still at it.

"It's a really good release," Thompson said of swimming, "... and then I love all the social connections I've made through it. My best friends are on the swim team. And the physical side of things was really fun and I just kind of kept up with it because of that."

Just another day at the office.