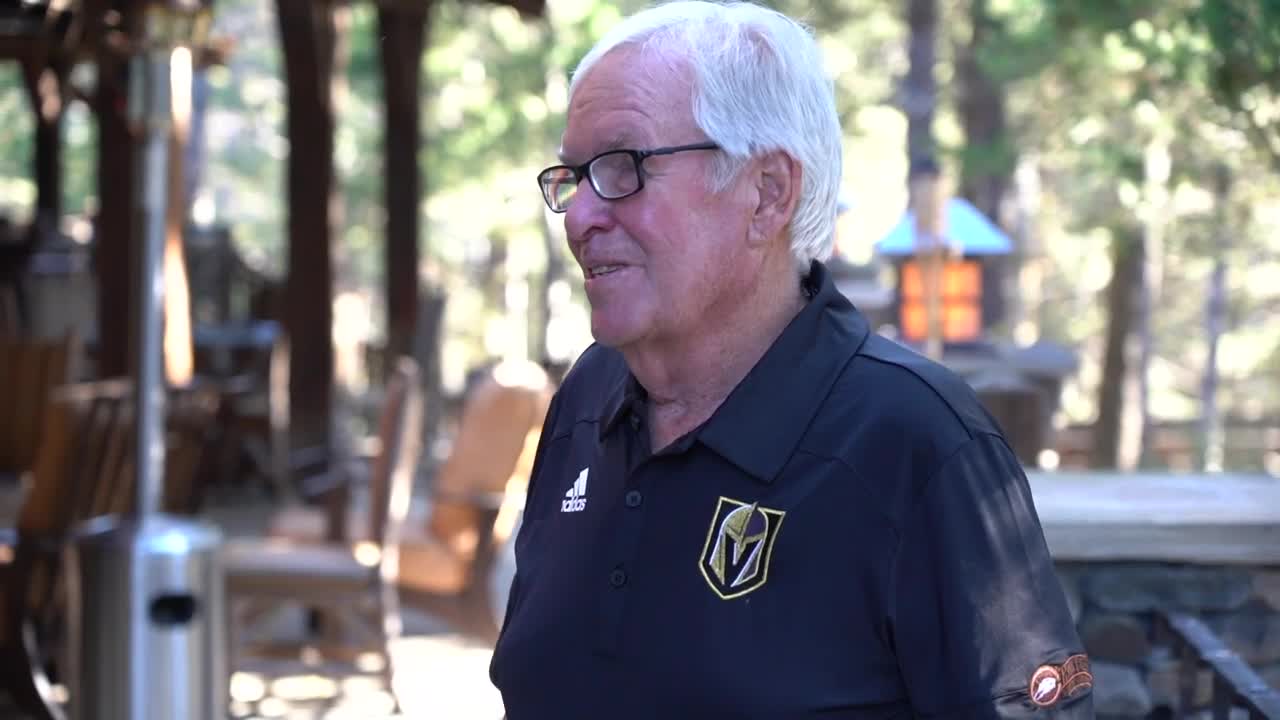 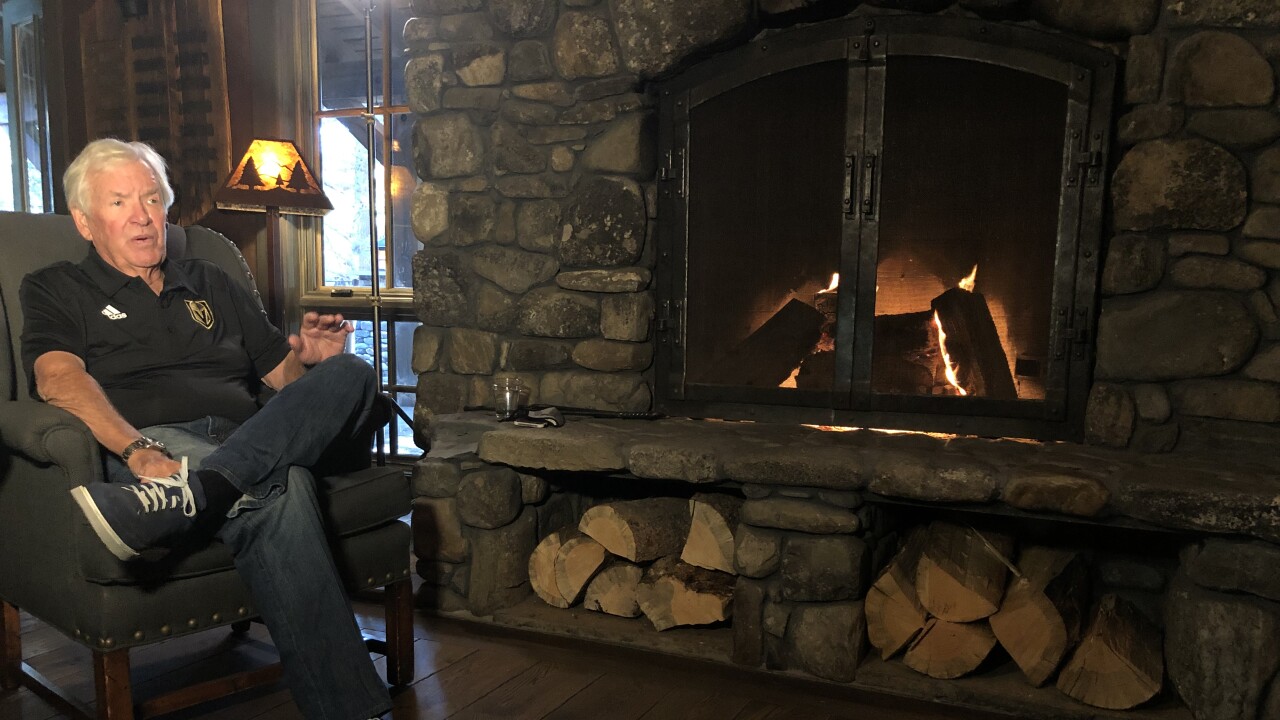 In a city known for its gaming and prime-time shows, Foley went a different route, becoming the first businessman to bring one of the major sports to Sin City, bringing the Vegas Golden Knights of the National Hockey League to town in 2017. Since then, Foley and the Knights have been a staple in the community, creating more youth opportunities and volunteering around the city.

Foley also owns the Rock Creek Cattle Company outside Deer Lodge, a 30,000-acre working cattle ranch with a members-only golf course. The ranch has also become an exclusive residential area with properties ranging from the $500,000s to nearly $15 million.

While this year's NHL Draft went virtual due to the ongoing coronavirus pandemic, Foley and his VGK staff spent the week at Rock Creek Cattle Company, spending time in the war room to determine the organization's future roster, while allowing members of the staff -- operations, scouts, communications and more -- a retreat from the bustling world of a pro sports organization.

MTN Sports was granted the opportunity to tag along during the Draft, learning more about Foley's past, present and future, as well as the impacts he's had in Montana, in our latest MontanaSports.com Original: One Montana Knight.

"I grew up in the Texas panhandle, so I spent a number of years there, but my dad was in the service, so we traveled, but we always went back to Amarillo and Goodnight, Texas, in the summertime, so I'd be there for three months," Foley said of his youth. "We came from a ranching family in the Texas panhandle, so I love the outdoors. I love the wide-open spaces, riding, shooting, fishing and everything you do in the outdoors as a kid and as an adult.

"My goal was always to have a cattle ranch and I chose Montana because we had been spending time in Montana since, probably year 2000, we moved to Whitefish. ... So, I love Montana and this ranch became available, so I put together some other people and we bought this place. It was nothing. It was a bunch of old buildings, and it was, at that time, 85,000 acres and about 3,000 head of cattle, a cow-calf operation. I loved it and I loved the creeks, so this became kind of another home for me. It all goes back to being a kid, what I loved, what I liked to do."

"It’s a spectacular property, especially when the weather permits. It’s a 30,000-acre working cattle ranch, that Bill Foley has built into a top 100 golf course," said Rock Creek general manager Todd Pollock. "Beyond that, you can ATV, UTV, fly fish, whitewater raft, go shooting, play tennis, go to the pool, have tacos at the pool, enjoy the dining establishments, as well, so it’s not just a golf destination, it’s really a family-wide destination."

"He is definitely the mayor, the celebrity, he’s the boss man here, for sure. But he’s Bill, and he always emphasizes that," Pollock continued, discussing working for the well-known businessman. "He comes in in jeans and a T-shirt and hangs out, talks to our members just like he talks to our fans in Vegas. He’s just Bill when he’s here, and he just wants to golf, hang out and enjoy his property here."

As Foley enjoys the view from the back patio of the Cattlemen's Club -- a beautiful clubhouse that features a bar, restaurant and pieces of western art -- he continues to trace his love for the ranch, and Montana, back to his family heritage.

"What's special about it to me is, it takes me back to where I was as a kid, being from a ranching family. By the time I was spending time in Amarillo and in Goodnight, the ranch had been gone a long time, but we still had access to ranching land. I was just all about going back to my roots," said Foley. "My great, great uncle was the first captain of the Texas Rangers and my great grandfather was the second captain, and they were depicted in Lonesome Dove. That heritage has always made me a westerner and want to be in wide-open spaces."

While Rock Creek remains a members-only establishment, Whitefish Mountain Resort has transformed into one of the top ski destinations in the country since Foley became involved more than 10 years ago.

"We really looked at him as the savior, honestly. He was, I guess to make a bad pun, he was our knight, you know?" joked Whitefish Mountain Resort director of marketing and sales Nick Polumbus. "He came in, and like I said, he put a lot of money in this place just on faith, and it’s paid off. We’ve become a solid contributor to the economy and a world-class ski destination. We were ranked No. 3 in the country by Ski Magazine, where 15 years ago we weren’t even on the list."

"That's a nice compliment because when I first got involved in the mountain about 13 or 14 years ago, it was like, 'Well, here's another outsider coming in. He's going to destroy our mountain. He's not going to let us ski there anymore.' And I never said anything on TV or in the press, but I knew what I was going to do," Foley recalled of the time. "The mountain was in financial trouble, so I garnered some resources and we just started improving the mountain. Year after year after year of putting more new ski runs in, building a new base lodge, rebuilding all the restaurants, rebuilding the top of the mountain. I mean, we just have done things every year and we keep on doing them."

"Probably eight, nine years ago, I almost considered selling the mountain, and then there was an uproar of, 'You can't sell the mountain.' So it was, 'You didn't used to like me, but now you do? What's the deal?'" he continued, laughing. "I love the mountain and it's really a great ski mountain. The only downside is we get inversions in the winter time, and so it gets a little cloudy. But we can have certain days that are blue sky and it's unbelievable. We get generally 350 inches of powder a year. Almost every night it snows, it snows a few inches, so every morning there's fresh powder. So it is a beautiful mountain. It really is."

The mountain has also become more than a winter destination under Foley's watchful eye. The village now includes many summertime activities -- hiking, biking, ziplines and an adventure park, to name a few -- that draw visitors throughout the summer months, many interested in a tour through Glacier National Park.

Whitefish, and especially the resort, have noticed the financial impact of those improvements.

"When he bought the majority share of the mountain, we were a break-even property at best," said Polumbus. "He put a lot of money in upfront that allowed us to do things like high-speed chairlifts, which are very expensive, the base lodge, which was very expensive. That was a huge upfront investment. In the last 10 or 12 years, it’s been year after year of steady re-investment, and that’s the kind of thing that keeps people coming back year after year, and allows you to grow, and it’s really allowed us to have a positive economic impact on the community."

"Whitefish has maintained that sense of character and community over the years. Sure, there’s a lot of people with a lot of money who have invested in the area and who live and have second homes, but they tend to be a little bit more understated," continued Polumbus. "It’s not like some parts of the country where people want to go show off all their money, Whitefish is a place where you could be at the local saloon downtown next to somebody with a ton of money and nobody even knows the difference."

"I'm a recluse, really. I'm shy and I'm a recluse," Foley said, "so when people thank me for bringing hockey to Las Vegas or doing things to the mountain or opening restaurants, I'm doing it because, for me, it's fun and I'm trying to improve things. I don't do it for accolades. The accolades are really irrelevant to me, I really don't care. I get uncomfortable when I get too many people saying how great I am, because I know I'm just a common guy.

"I've gotten fortunate and have made a little bit of money in my time. I love fixing things and making them better, so that's all I'm about, really. And I really love my golf game, which is terrible."