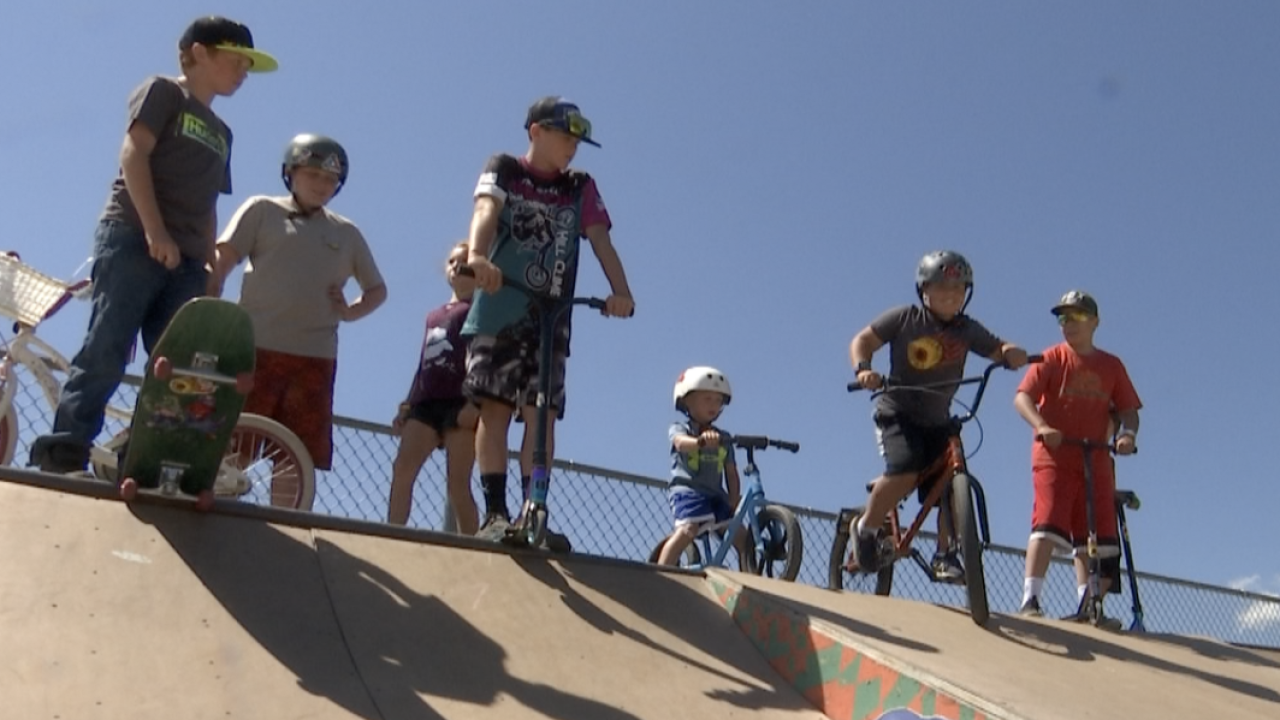 RED LODGE - Hometown kids on a sunny Red Lodge afternoon all want to show what they can do. But Hellroaring Skatepark is almost two decades old and it's showing.

"As you can see, we've got a lot of wood features, and anyone that knows Red Lodge climate knows it's not conducive to the weather," Ryan Rummel told MTN Sports, referencing the park's variety of ramps. Rummel is a member of the Red Lodge Skate Board, a group volunteering to upgrade Hellroaring with modern specs after years of patchwork.

"We can put a lot of money into wood and by next spring, you can't really tell," said Rummel.

Kevin Bonk is also a board member.

"Every year we come out here with volunteers because the funding is not there for fixing it with city funds," he said. "So, we do this all with volunteer work."

Rummel simply sums it up like this: "You're repairing something that can't be repaired."

So, instead of putting a fresh coat of paint, so to speak, over the same worn out ramps, they've devised a blueprint for a skate park set to rival the best in our region.

"That means all these ramps disappear and we put them all into concrete," Bonk said.

He also says the park is one of Red Lodge's most popular, not only every summer, but through spring and fall. "Kids can't always get up into the mountains," he explained.

Aaron Kyro knows. He grew up a few blocks away and now is a pro skater in San Francisco, and on board with a generous donation. The new park's price tag is estimated at $200,000 and the crew says it has already raised roughly $125,000 since ramping up the venture in October. The board is still seeking donations on its website at www.Hellroaringskatepark.com.

Ireland Ramey is 12 years old and says it "would be cool" to turn pro one day on his skateboard. Two of his favorite tricks? The 50-50 and rock to fakie.

"Your board comes up and you go over the coping and then come back down it," Ramey explained, maneuvering his board while describing rock to fakie. "And then, 50-50 is when you come up and stay there and then drop back in."

Wells is older -- early 20s, likely -- and lives in Cody, Wyo. He still lights up at the unveiling of the new skate park there while he was growing up.

"It's a world-class park to where it's all concrete, has the transitions and stuff. I pretty much was there every day for the first couple years," Wells said.

The Red Lodge park also caters to more than skateboards.

"If kids want to come out with scooters, bikes, BMX bikes, we're not going to turn anybody away," Bonk said.

Naturally, a day at this park is not all smooth rides and mind-blowing finishes, which is exactly why they keep coming back.

"It promotes perseverance with the kids," Rummel said. "After they fall, they keep trying to get back up."

Skateboarding was actually set to make its Olympic debut this summer in Tokyo before the Games were postponed to 2021.

"It's the getting up that makes skateboarding such a cool thing," Wells said, "especially when the community is able to provide that for the youth. I'm a testament to that because I've been doing it and staying with it, and now it's a vehicle that can take me around the world."