Don Wetzel Jr.: 'My grandfather pulled the coup of the century' 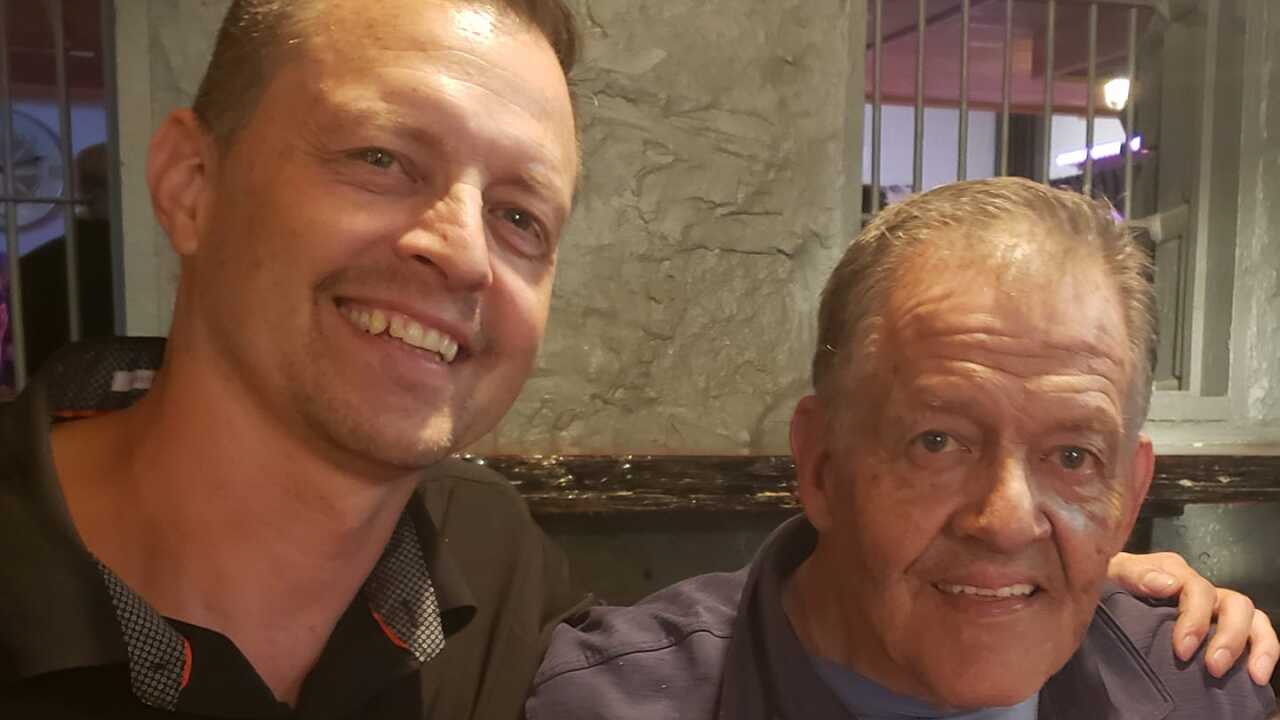 (Editor's note: Don Wetzel Jr. is the grandson of the late, accomplished Walter "Blackie" Wetzel, a former student-athlete, politician and businessman who had lasting impacts on the Blackfeet Nation, most notably the designing of the Washington Redskins former logo, which was inspired by the image of Two Guns White Calf. Wetzel Jr. penned this column in memory of his grandfather.)

Coup of the Century

The Washington Redskins name is gone along with the logo of Two Guns White Calf that my grandfather Walter “Blackie” Wetzel gave them in the early '70s.

They have always been separate items entirely, with the name being around for 80-plus years and the logo for almost 50. Sadly, this has been one of the only consistent hot button issues on American Indians for the past 30 years and it has impacted my family immensely.

I have been misquoted so frequently that I realized I needed to write something in my own words. For clarification, the logo was but 5% of my grandfather’s impact and I hope to share the indigenous perspective on the story.

Walter “Blackie” Wetzel was a phenomenal student-athlete and his accomplishments were extensive. As he matured, he began to grow into an outstanding and charismatic leader with a fire for change and progress. As with all Blackfeet, he hit everything head on. He was always in the game, never sitting in the bleachers giving suggestions on how things should be done. He fought for the betterment of the Blackfeet Tribe and eventually carried that fire to the national level for all Tribal Nations.

From here, I want to explain the term, “gift exchange” because it is important. A gift exchange is also called a ceremonial exchange, it is the transfer of goods or services that, although regarded as voluntary by the people involved, is part of the expected social behavior. When someone needs assistance, they go to another and provide a gift and the benefit is received in many forms. Knowledge and wisdom, assistance and support and always the spiritual benefit of prayer. Occasionally a person receives knowledge, guidance and appreciation without giving a gift. It is a recognition of their accomplishments and the potential seen within them. These acknowledgements encourage them to keep rising, living a good way and staying on a positive track to lift themselves and their people. The latter was the case of my Grandfather.

Walter entered politics in 1948 and eventually became the Tribal Chairman of the Blackfeet Business Council, holding that position until 1964. My grandfather understood the histories of our people. He understood the sacrifice of our ancestors and he had his vision set. The Blackfeet Nation is in northwest Montana at the base of Glacier National Park. Our people are connected to those mountains and the vast territorial land they held for centuries. It is a relationship. Our massive territory pre-colonization extended across the entire state of Montana up to Alberta and more.

We have teachings and histories within our indigenous lands that go back 20,000 years.

Over the last three centuries through manifest destiny and governmental policies these land territories were depleted. The Indian Wars carried on for decades and the Plains Tribal Nations were never defeated, instead an exchange was made, and peace was accepted. The Tribes gifted access to their sacred lands and the United States was to do their part and fulfill the treaties for as long as the grass grows and the river flows.

It has never happened.

The basic honor expected for this exchange was broken time and time again. Land base was substantially reduced as our tribes became part of this new republic. Chief White Calf was our last Blackfeet War Chief and fought in many battles with the scars to prove it. He fought in Congress against the government’s broken promises as they took more land and eventually “cut the head off our people”, as stated by White Calf himself, in 1895, as we sacrificed our sacred mountains now called Glacier National Park.

In 1903, he died of pneumonia in Washington, D.C., still fighting for our lands. Chief White Calf’s children were prominent and respected leaders of the Blackfeet. My grandfather was honored by Chief White Calf’s son by a rite of passage of the chieftainship of the Blackfeet Nation and given the name "Blackfeet man" (Siks-A-Num). He received transferred knowledge and guidance to support his life journey as he was a prominent leader for his people. The honorable gift exchange began.

Chairman Wetzel fought tribal termination and supported tribal self-determination and governance. Stating before Congress in 1957, “I feel it is up to the Indian himself to come up with the plans and to prepare for the future.”

During Montana's biggest natural disaster, the flood of 1964, he and his fellow council members secured funding and support by bringing the political brass out to witness the damage while revealing the resiliency of our people. Montana Senators Mike Mansfield and Lee Metcalf and U.S. Secretary of the Interior Stewart Udall were front and center during his chairmanship. They met with our Elders and fought with us for the benefit of many. Blackie was the first Montana Tribal Leader to sit as President of the National Congress of American Indians from 1960 to 1965, meeting with President Kennedy at influential times of great change and direction.

At the end of the civil rights movement in 1970, the nation was evolving as it is today, and Walter “Blackie” Wetzel saw an opened door and walked into it, using his connections and relationships gained through his career in D.C.

He entered the Washington NFL team’s head office and introduced a powerful piece of indigenous imagery to replace the “R” logo on their helmet. The team later accepted the logo, depicting the image of Blackfeet Chief Two Guns White Calf. It was a subtle move at an impactful time of change in our country and it created an opportunity to influence all of America showing the marginalized indigenous tribes of this land have something to say.

What I would like to emphasize is this: The logo will now be returned to our people, but at that moment in time in the '70s until now, my grandfather pulled the coup of the century.

It was often assumed the team used the imagery of Chief White Calf for their benefit, when instead Blackie used them for our Blackfeet benefit and we introduced that power into the minds of our nation and world. Chief Two Guns White Calf held camp inside the NFL for almost 50 years as Blackie returned the honor given to him. The gift was never between the NFL team and Blackie, it was always between Blackie and our Blackfeet Chiefs.

The image is embedded within the world’s psyche, and it is Blackfeet. He took nothing for it, but smiled every time he seen it, affirming, “Indians are proud of Indians.”

Our Blackfeet people are universally intelligent. We are powerful. We are honorable. Past to present, we have made a tremendous impact on the world. We influenced Abraham Maslow with our philosophies of self-actualization.

Our Blackfeet warrior Elouise Cobell (Yellow Bird Woman) fought against the injustice of the federal government and won the largest class-action settlement in history and most every tribal nation benefited from her work while restoring the land base of reservations to tribal control.

Our Blackfeet runners have 33 combined state cross country titles within our reservation and sits in the top level of the national record books. Our basketball athletes and rodeo champions blaze trails and bring great pride while our boxing prowess brings us world champions and ESPN recognition. We have successful tribal educators, coaches, doctors, politicians and leaders in every occupation imaginable.

Those numbers quadruple if you take out the border between us and Canada and include our relatives from up north. The Blackfoot Confederacy held a massive territory predating any such name that this land was ever to be given by others. And yes, our deity Napi also fought with Wonder Woman. The Blackfeet are a beautiful, strong, connected people with our traditional ways and societal structures still intact. This is only the beginning, as our youth are reconnecting to this beautiful identity. We are healing from the ills of colonization and will bring balance back.

I share these things with great pride because that is rarely seen in the media in reference to our indigenous nations. We must speak our own narratives of strength of our people. Society needs to include this continent’s Elder knowledge in conversations of healing as a nation for we have thousands of years of history, knowledge and relational understanding to share and connect to America.

It is a necessary voice as people get divided more every day by politics, money and color. I express extreme gratitude toward the path my grandfather, Walter “Blackie” Wetzel, made for others to follow, as he raised our chiefs into the conscious of the world.

Our Blackfeet chief may have awakened within the organization these last five years by the songs and ceremony we brought to D.C. He may had been unsettled in what he had seen, and the name change and return of our great Chief White Calf is a good start.

The right thing to do is have a returning warrior ceremony, a healing. It is what this organization needs to start anew, and it would be an example for our country to follow.