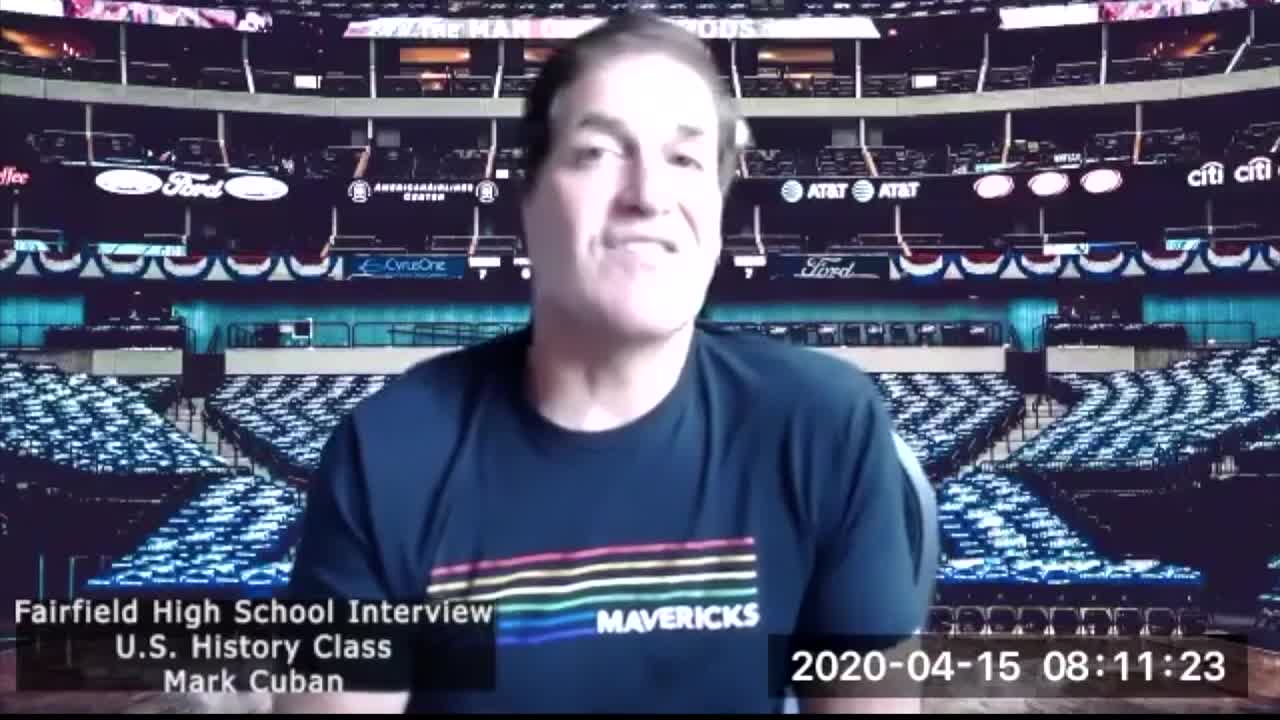 In mid-April, Fairfield social studies teacher Mike Schmidt tried to spice things up for his online high school students. He reached out to Mark Cuban, owner of the NBA's Dallas Mavericks -- just a shot in the dark -- and Cuban called him back.

In a Zoom chat that lasted almost 25 minutes, Cuban told some fun stories and offered some insightful advice, ranging from his first job to what he would pursue right now if he were a teen chasing a lucrative career.

Cuban and his family are dealing with many of the same quarantine issues we are in Montana, including shared business and entertainment space in the house.

Cuban opened the Zoom interview while playfully tossing his 10-year-old son across his lap.

"Oh, this guy? All he wants to do is play Minecraft all day," Cuban said. "You know, I’ve got three kids: 10, Jake you’ve met, and 13 and 16, Alyssa and Alexis. And my 16-year-old daughter hates me (laughing). Just like any other family, (we're) doing all the same things. Nobody likes it, so we’re trying to create as much forced family fun as we possibly can ... movie nights.”

One student asked Cuban about his first job. No surprise it was basketball-related.

“When I was a kid I went to my dad and said I wanted basketball shoes because I’ve always been a basketball junkie," Cuban said. "He was playing poker with his buddies and said, 'Those tennis shoes on your feet, though, those basketball shoes you’ve got on right now look like they work. When you have a job you can buy whatever you want.' Same thing I tell my kids.

"I’m like, 'Dad, I'm 12 years old. How am I going to get a job?' One of his poker buddies was like, 'Look, I’ve got all these boxes of garbage bags. Why don’t you go door-to-door in your neighborhood and sell them?' And that’s what I did, so it got me my first pair of nice basketball shoes but also got me into selling things and starting my own little business that way.”

That led to student questions about figuring out what to do in life.

The NBA owner actually has multiple businesses and his estimated worth is $4.3 billion. Here’s his advice to teens on chasing a career path post-coronavirus:

"If I were 16 years old I would become an Alexa expert. They have these things called script where you can program it to do certain things and have fun with it or set things up for other families. And now as we try to go back to work, people are going to want to touch things last, so voice activation is going to be more important. So, if you really learn it that’s going to be a great scale going forward.“

Cuban started his television series Shark Tank a few years ago for young entrepreneurs. His favorite success story involved a woman in her late teens.

"There was a woman who came on, who is from my hometown of Pittsburgh, and she had started a scrub that she used to make her skin nicer and to help with her eczema that she had when she was a kid," Cuban recalled. "She came on when she was 19 years old doing $40,000 a year in business. Now she’s doing $2 million a year in business, making hundreds of thousands of dollars in profits. Now she’s 24, I think, and she’s killing it.“