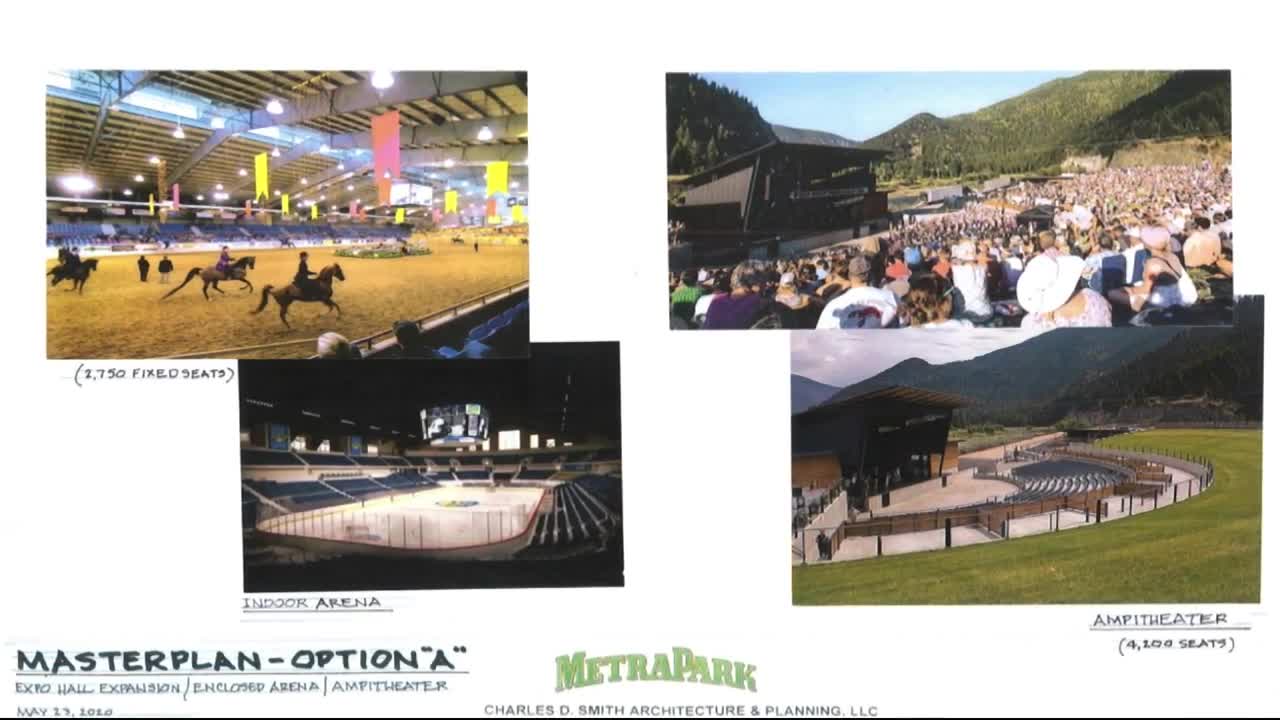 BILLINGS — A master plan for redeveloping most of the facilities at MetraPark in Billings was revealed to the public Monday with three different proposals to replace the grandstands and livestock barns on the south of the property.

All three plans include 17 separate projects. The differences are what type of facility will replace the aging grandstands and livestock barns.

Charles D. Smith was the architect who drafted the plan. He has worked on fairgrounds around the world and off and on with Yellowstone County, which owns MetraPark, since 1992.

“The grandstands have been hemmed in there for so long. Now we can let (the Expo Center) grow out a little bit," Smith said.

The grandstands at MetraPark were declared unsafe earlier in the year and Yellowstone County commissioners decided to demolish them. That project is scheduled for sometime this summer.

Smith said fairgrounds around the world are moving more toward the model of an exposition park operating many events year-round. He said MetraPark is already doing that and expects more events and shows.

“That’s where our future is headed: more and more uses in valuable property. We have parking, we have utility, we have staff, we ought to use it as much as possible," Smith said.

He said he worked through 27 categories to define the issues MetraPark is trying to overcome with the new design. Some of the categories include regional access, vehicle and pedestrian circulation, the movement of animals around the grounds and adjacent land uses.

Here's a list of proposed improvements to MetraPark that would happen in all three plans:

Smith hopes that the new and improved MetraPark will serve as a connection to downtown Billings and the East Billings Urban Renewal (TIF) District (EBURD).

“I kind of see it as a bookend of the downtown development down to EBURD, down to MetraPark and how that links up. And by the way, there’s a rail that connects all of those that has great interest to me. And I had a very good conversation with that ownership the other day," Smith said.

The rail line, which takes up what would be Fifth Avenue North, is used by a handful of businesses. Smith proposes using it to transport people to the fairgrounds after departing the train and walking on a pedestrian bridge over Main Street.

Smith said he worked with community stakeholders and received public input to help determine what elements would go into the design.

The county commissioners are expected to make a decision on which of the three plans will move forward within the next week. Smith said the whole project could cost between $60-$80 million, but he hopes it would be an economic driver for the county.

“I would say something for everybody and economic impact, what comes after that, more cash coming in. Therefore, less taxes typically, but you can’t promise that," Smith said.