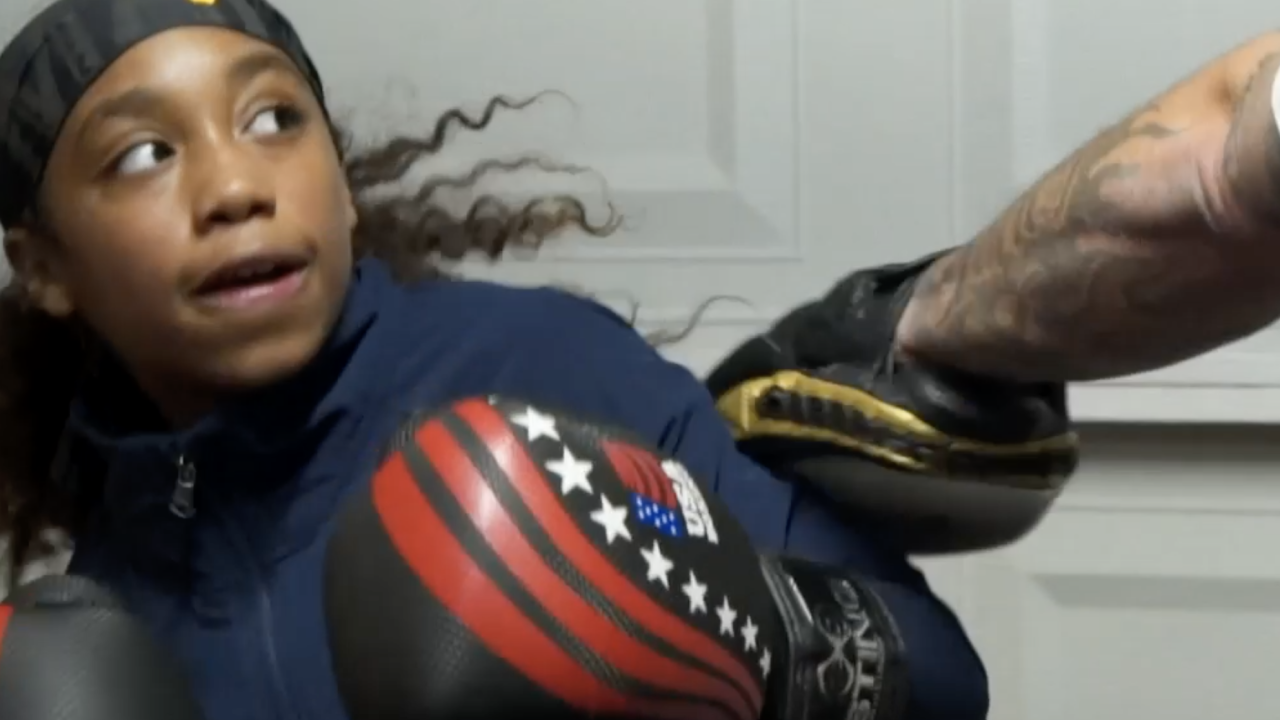 The young Billings boxer, known as Jojo to most, loves steak and the more she wins, the better it tastes. And while that distance between the perfect uppercut and the perfect cut of steak sometimes seems never-ending, it's worth every minute.

"According to USA Boxing, which is like the big one, in the 85-pound weight class I'm No. 1," Martinez humbly told MTN Sports in March.

"The thing about Jojo is, she's naturally gifted. She's very athletic. She learns things very quickly. She has her heart set on this," said Jojo's dad, Austin Schnizler, during one of her workout sessions. "If you were to sit down with Jojo right now and ask her what she wants to be, she'll tell you a professional boxer. She'll tell you an Olympic boxer.

"She understands that right now, even though we might not be boxing, with the end goal being a professional or Olympic boxer, she's going to have to work her tail off for the next 10-plus years."

Entering the sixth grade at Big Sky Elementary School, one would think Jojo has been boxing all of her young life. Truth is, it's been barely a year.

Her dad trains her but says he's never thrown a competitive punch.

"I actually grew up loving boxing. I lived in a neighborhood where Fernando Vargas was kind of the local fighter," Schnizler said.

"I have zero amateur fights under my belt. Training, college football, high school football. Hitting mitts, it works beautiful for hand-eye coordination. So I did a lot of boxing drills growing up, but never competed."

Jojo playfully rolls her eyes when describing all the research her dad has done.

Pick a spot and Jojo has likely trained there -- gyms, high school tracks, distance running in the hills and, most of the time, in her family's garage which has been converted to a gym with punching bags and easily more than a dozen trophies. The walls are decorated with inspirational messages.

"I'm big on motivational quotes," Schnizler said. "They do a lot for a person. We have one in our gym at home -- it's a Mohammad Ali quote -- it says, 'I hated every minute of training, but I did it now so I can live the rest of my life as a champion.'"

Jojo gravitated to boxing when her parents suggested it as a way to stay active over the winter.

Jojo said she's thankful for the drive instilled by her dad, even in moments of exhaustion.

Jojo has blown up not only in the ring, but on social media. A year ago, just more than a hundred fans were following her on Instagram. And then...

The Rock Thing, that would be a clothing campaign for Project Rock -- as in Dwayne Johnson.

"They found me on Instagram, which was crazy," Jojo marveled.

Schnizler subscribes to the theory, if it sounds too good to be true, it probably is.

Some Olympic-caliber boxers are now following JoJo, even sending encouragement. Her new total on Instagram followers is approaching 15,000.

Ah, the simple pleasures, of which she's sometimes deprived for the price of success.

"It's so easy to see that The Rock or Lindsay Vonn liked your post," Schnizler said, "but I'll tell you, the thing about Johaunna is not even her closest friends at school know she's a part of these Under Armour commercials.

"My job as her father is to make sure she stays humble, stays on a clean, clear path, understand you're no better than the next person no matter what opportunities you've been presented with in life."

Schnizler wants that for his entire family.

Jojo's trail in life feels like it's just beginning. She'll tell you some days it seems crooked, entirely uphill and never ending. But what fun would the end be?

Success and surprises validate those 5:30 a.m. workout alarms. But, truth is, boxing is a blood sport. She knows it. Her dad knows it. His drive is to teach and protect. Her authentic fire burns to learn and dominate.

Schnizler insists he wouldn't push Jojo to great boxing lengths if she was disinterested.

"If she was giving half effort, maybe I wouldn't be as much into it as I am," he said. "She gives it her all, she pushes hard. The standard is set kind of high, but I want her to push for more. It starts here, but it doesn't end here."

As for that steak, Jojo says she loves it medium rare.