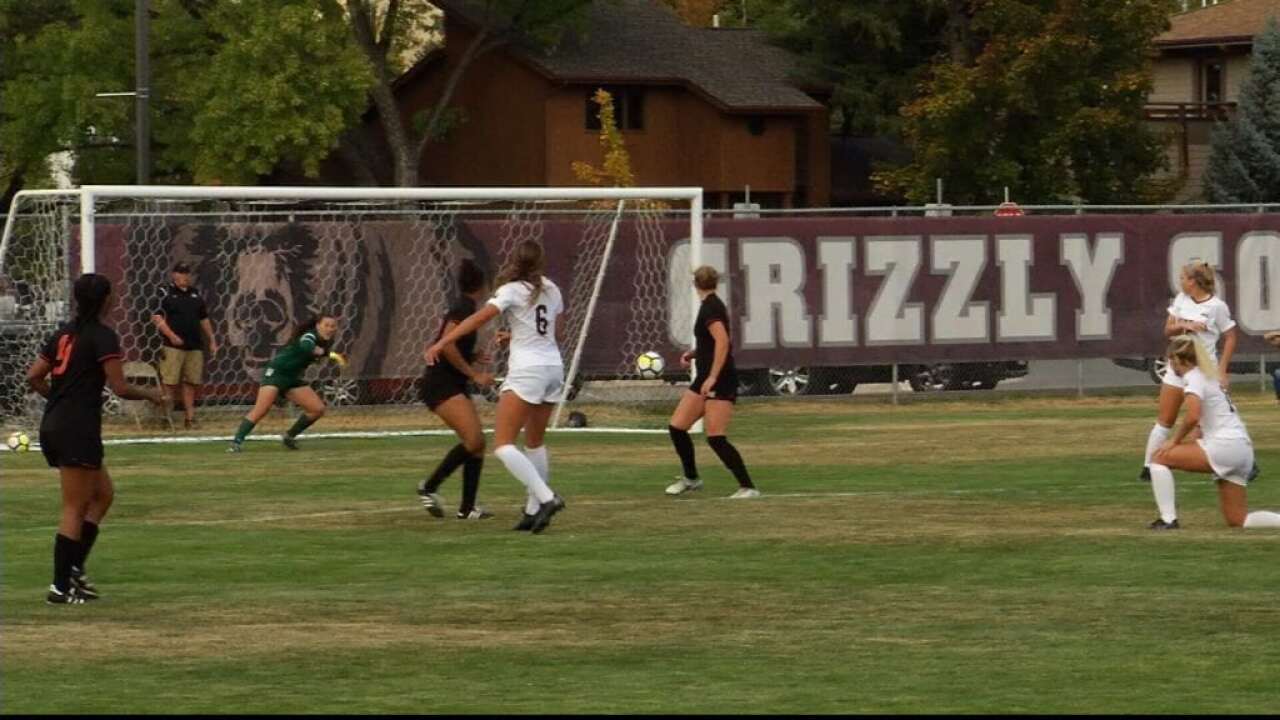 MISSOULA -- The Montana soccer team will return to South Campus Stadium this week for its first two-match home weekend of the season. And what it hopes will be its first full home match of the fall.

The Grizzlies hosted UC Santa Barbara on Friday in its original home opener, but after a scoreless first half, the lightning arrived, then darkness. Because the match did not go the minimum 70 minutes to be considered official, it went down as a no-result.

Montana flew to Berkeley on Saturday and fell to the undefeated Cal Bears on Sunday afternoon 1-0.

Idaho State will travel to Missoula after hosting Saint Mary’s on Friday and play Cal Poly at South Campus Stadium at 10 a.m. on Sunday.

Outside of its result against Washington State, Montana has played its other opponents to either a draw or a one-goal outcome.

Even UC Santa Barbara, which Montana played to a 0-0 halftime score on Friday, traveled to Idaho and defeated the Vandals 3-0 on Sunday. The Grizzlies’ is a solid body of work, despite the winless record.

* Washington State is up to No. 13 in this week’s national poll. Cal is among those teams who are outside the top 25 but receiving votes.

* Alexa Coyle’s second-half goal against North Dakota State continues to be Montana’s lone score of the season. The Grizzlies are one of just six teams out of 330 NCAA Division I programs who have played at least five matches this fall and have a single goal scored.

* This is the first time since 2005 and just the second time in program history that Montana has one goal scored through its first five matches.

* Montana took 22 shots at North Dakota State. The Grizzlies took five or fewer in each of their other four matches, though that’s a statistic that is open to the interpretation of the home stat crew.

* Outside of its matches against Washington State the last two seasons, of which there have been three, Montana has allowed its other 24 opponents since the start of the 2018 season to score one or zero goals 18 times.

* Freshmen have made 10 starts this season, with Allie Larsen getting five at center back. Emme Fernandez has made three, Sydney Haustein and Quinn Peacock one each.

Jaden Griggs has been on the field in four matches, Marley Muelhaupt in three and Molly Massman in two.

* Alexa Coyle, with nine, leads Montana in shots. Taylor Hansen leads the team in shots on goal with four. Four of her five shots this season have been on goal.

* The Mustangs are making their first trip to Missoula since 2003, when Cal Poly left South Campus Stadium with a 3-0 victory.

* The Mustangs are 1-4-1 this season, their lone win a 2-1 victory over Pepperdine in their only home match to date. In its other five matches, Cal Poly has scored just one goal, which came in a 3-1 loss at Sacramento State.

* The Mustangs were picked ninth out of nine teams in this season’s preseason coaches’ poll, somehow picking up one first-place vote in the process.

* The Cowgirls, who host Southern Utah on Friday before traveling to Missoula for Sunday’s match against Montana, are 2-1-2 this fall, their only loss a 2-0 home decision to now 3-1-1 Baylor.

* Wyoming is coming off a 12-4-4 season in which the Cowgirls finished in a three-way tie atop the Mountain West Conference standings with Boise State and New Mexico at 7-2-2.

* One of those four draws last season came at home against Montana. The teams played to a 0-0 tie on a field where the Cowgirls would go unbeaten on the season at 6-0-3.

* Wyoming earned its conference tournament’s No. 2 seed and lost 2-1 in double overtime in the semifinals to No. 3 New Mexico.

* The Cowgirls, with just two starters back from that team, tied for fifth in this season’s Mountain West preseason coaches’ poll, tying with UNLV and coming in behind Boise State, San Jose State, New Mexico and San Diego State.

* Wyoming has had six players score at least one goal this season. Four players have scored twice for a team that’s scored 10 goals through its first five matches. ... The Cowgirls have outscored their opponents this season, 10-8, despite getting outshot through five matches, 81-51.

The Cougars led 1-0 before the match was four minutes in, 2-0 before 12 minutes were gone, 3-0 before the clock had reached even 24 minutes.

Three more goals were scored in the second half, with Washington State finishing with a lopsided 26-3 advantage in shots. Thirteen of those were put on goal.

It’s why there was some concern over Montana going on the road last weekend and facing another unbeaten Pac-12 opponent: California, which hadn’t allowed a goal through four matches and had scored 12 times.

It came just nine days after the Washington State match. And Montana looked like a different team, one that was able to compete in that environment against an opponent of that quality.

The match was scoreless at the half. Cal would score the game-winning goal on a penalty kick early in the second half, but that would be the Bears’ only goal.

The teams would put the same number of shots on goal over the final 45 minutes. Montana would fall 1-0 but win in the bigger picture.

“We’re trying to grow every week. The main focus for me, going into Cal specifically, was you can be physically fit but are you able to psychologically compete in a game?” said coach Chris Citowicki.

“That’s an area we identified we needed to grow, that we could go into a Pac-12 opponent and not go into our heads.

“On Sunday we had kids performing at an exceptionally high level who normally would struggle in those types of environments. For us to improve in that area was massive, so I was very happy with the weekend.”

* If a match goes down as a no-result after 45 minutes, did it even really happen? Yes, Montana played a regular-season match on its home field on Friday, but after waiting for two hours for the match to resume, it was cancelled and everyone went home feeling unfulfilled.

“We’re all tired of the travel and can feel it. We’re just happy to be at home and not have to get on a plane to go somewhere,” said Citowicki.

“It’s going to provide a whole new level of energy, especially because we got a taste of it (on Friday). We just want it back.

* Montana is winless through five matches, the first time that’s happened since 2010. Is there cause for concern? Did you start at the top of this article and read about the resumes of Montana’s opponents to date?

Then did you look at the scores of those five matches? Outside of Washington State, each was a draw or a one-goal decision.

“We’re playing good teams. Everyone is a test, all to prep you for conference, get to playoffs, win playoffs, get to the (NCAA) tournament. That’s what it’s all about,” said Citowicki.

“We’re improving at a very rapid rate. We’re addressing things we didn’t even get close to addressing last year. I feel like we’re way ahead of the process compared to last year.

“The depth we have is outrageous. They’re pushing for playing time, which means the starters have to work even harder to stay in there, so it’s a very competitive environment. It’s a ton of fun to be in for me as a coach.”

* The freshmen are coming: Sydney Haustein got her first career start on Sunday. So did Quinn Peacock. Allie Larsen has started every match this season. Off the bench on Sunday: freshmen Emme Fernandez, Jaden Griggs and Molly Massman.

Was it a coincidence that it was also Montana’s best showing of the season?

“They are improving continuously and have really provided great depth for us,” said junior Taylor Hansen. “It’s nice to know we can put any of them on the field and know they are going to perform. They’re doing an amazing job.”

* Defense continues to impress: Montana played without center back Caitlin Rogers, who was on the field for more than 2,000 minutes last year and had played every minute through four matches this fall, on Sunday. No worries.

Avery Adams slid to center back, alongside Allie Larsen, from her outside back position, which opened a spot for McKenzie Kilpatrick to play opposite Taylor Hansen.

All four players were on the field for 90 minutes against Cal, and they, along with goalkeeper Claire Howard, held a team that had scored a dozen goals through its first four matches to just one, on a penalty kick.

In four of its five matches, plus the half played against UC Santa Barbara, Montana has allowed one goal or posted a shutout.

“Things are really good. I love the goalkeeper we have, then we have depth across the board as well. We’re very secure in the back,” said Citowicki. “I love how they’re playing and love the confidence they bring every single day.”

Upcoming: Yep, back on the road. Montana will play next week at San Francisco and Saint Mary’s. The Grizzlies will open their Big Sky schedule the following week, also on the road, at Idaho and Eastern Washington.