This past summer the MTN Sports team unveiled its #MTTop50, a list of the 50 greatest boys basketball players to grace the Montana hardwood.

Sports fans across the state were hoping for similar countdowns in other sports, which leads us to the #MTTop20, a list of the most outstanding wrestlers in the Treasure State’s fine history.

Each Monday through Friday for the next four weeks, we will introduce an athlete based on his awards and accolades in high school, college and even professionally. Various coaches, athletes and referees have assisted in the decision to whittle the list down to the Top 20.

The No. 1 wrestler in Montana’s history will be announced on Friday, Feb. 10 before competition begins at the state wrestling tournament in Billings.

Twenty-seven athletes have won four consecutive state championships, with many more winning at least three during their careers. Numerous athletes have also performed well at the national stage, including Jarrett Degen.

Degen carried on a fine tradition of wrestling at Belgrade High School, winning four consecutive state championships for the Panthers, the finale last season. He won in four different weight classes – 125, 132, 138 and 145 pounds – with three of his four titles coming by pinfall. In fact, all but two of Degen’s state tournament matches were won by pin. The two decisions came during his freshman and sophomore campaigns, making him one of the most successful state tournament wrestlers in Montana’s great history. 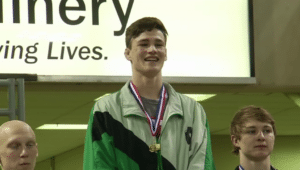 One of the top-ranked high school wrestlers in the nation, Degen also won two National High School Coaches Association championships and finished second this past year. He is currently a member of the Virginia Tech wrestling team and could solidify himself higher on the list pending his collegiate career.

Havre High wrestling coach Scott Filius: “Jarrett is a great kid. We’ve trained with him a ton, all the way from middle school through high school. (My son) Parker and Jarrett wrestled in the same training camp for nationals the last two years in a row, they’ve been to a lot of camps together and they’re good friends. He’s a spade, he looks for competition, embraces hard work and I look forward to him doing really well.

“There are two things he had that are a little bit unique. He has long strength, he’s strong at the end of his reach where most kids lose his power. The second thing is he was never uncomfortable. You couldn’t put him in a position where he wasn’t comfortable.”